On the eve of National Safe Boating Week, the Department of Transport (DoT) has joined with WA Police and the Department of Fire and Emergency Services to highlight the importance of wearing a lifejacket when on the water.

DoT Director Waterways Safety Management Chris Mather said there had been several incidents over the past ten years that had involved multiple fatalities, contributing to an overall increase in deaths

“Whilst the increase in fatalities cannot be attributed to any single factor, our investigations following each of the deaths have shown some could have been avoided if the person had been wearing a lifejacket when they entered the water,” Mr Mather said.

“While a recent survey showed voluntary wearing of lifejackets had increased in recent times, growing from 32 per cent in 2019 to 43 per cent in 2021 – after skippers reported one person on their vessel on a recent voyage had been wearing a lifejacket – the low level remained a concern to authorities.&

“As the new boating season gets underway, we are strongly urging those on the water to not only carry but more importantly wear their lifejacket.”

Skippers are currently required to carry an appropriately sized lifejacket for each person onboard when operating in open waters on the WA coastline.

“In an emergency like this, 30 seconds could be all the time skippers and passengers have to grab life-saving safety equipment. Investigations have shown that people who are already wearing their lifejacket have more time to raise the alarm by making a radio call and are able to activate their EPIRB,” Mr Mather said.

When preparing for the boating season DoT wants skippers take the 30 Second Challenge to ensure they’re ready for an emergency.

“Skippers need to be responsible, taking time to complete a BEST check every time they head out on to the water. Unfortunately, skippers who fail to do this put their safety and that of those on board at risk,” Mr Mather said.

“National Safe Boating Week is an excellent time to spend time preparing for a safe summer of boating.”

DoT continually review fatal incidents with the purpose of identifying common causal factors and making any necessary adjustments to its compliance and education programs.

People can visit www.transport.wa.gov.au/30secondchallenge to find out how to take the challenge. 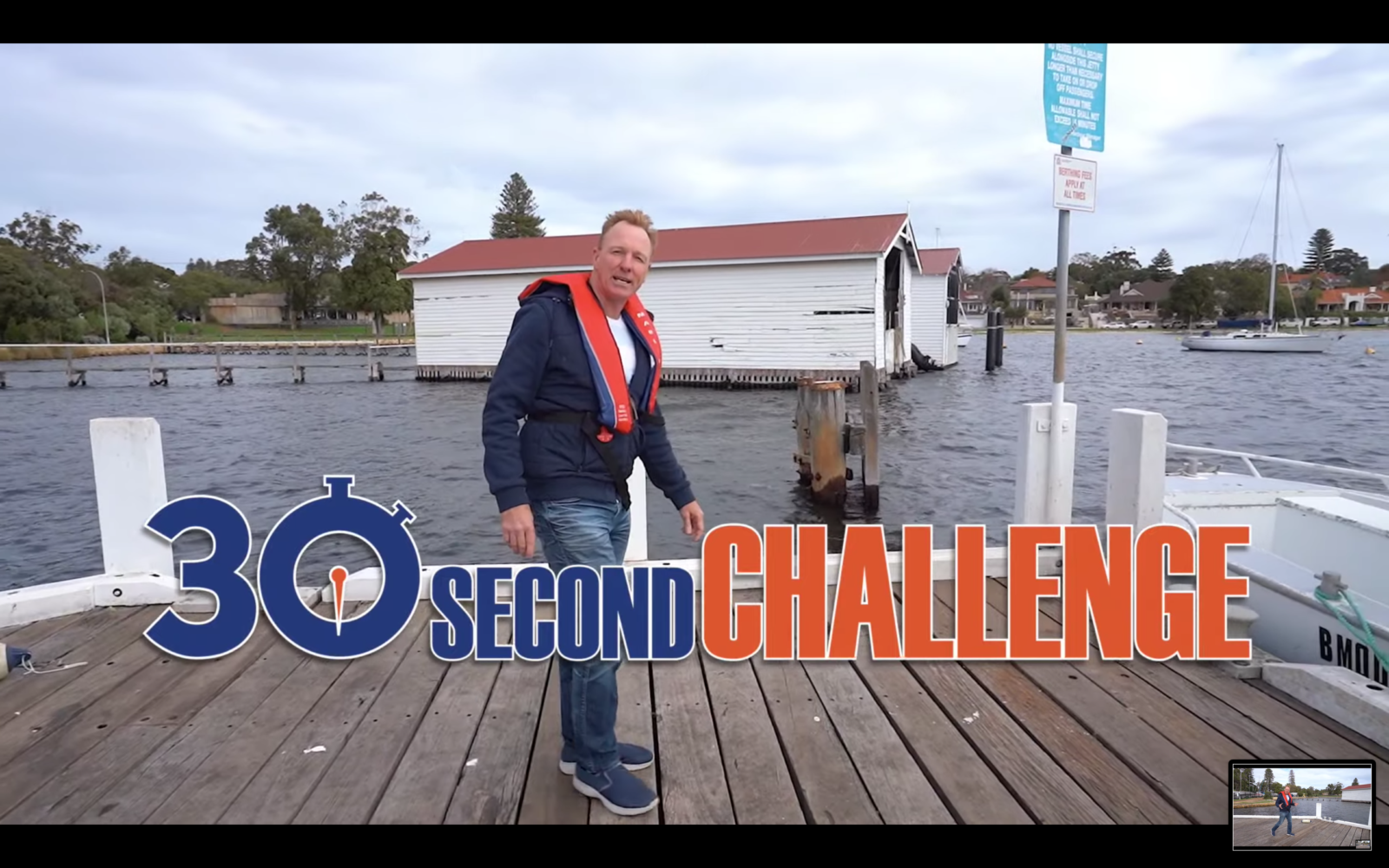 The Department of Transport (DoT) wants those heading out on the water to be prepared and is advocating skippers and passengers take the 30 Second Challenge which tests readiness for an emergency response on board a vessel.

This initiative, which tests if people can gather flares, EPIRB, make a radio call and put on a lifejacket in 30 seconds, responds to boating incidents data which showed that better maintenance of safety gear and improved accessibility could have limited the number of boating tragedies.

The 30 Second Challenge occurs at boat ramps State wide and is delivered by Marine Safety Education Officers. There is an incentive for boaters to take part. The boater who can successfully complete the challenge the fastest will be given a marine safety pack. The pack will include:

The 30 Second Challenge is not limited to the boat ramp events, take the opportunity next time you plan on going boating. How quickly can you get to your safety gear? Remember nothing is faster than disaster!

Education Officers will be conducting  safety equipment checks from Bunbury to Albany in October 2020 and give Skippers as well as all crew the opportunity to take the 30 second challenge.

METSTRADE is only days away