The number one racing boat in Australia was declared overall winner of the Rolex Sydney Hobart Yacht Race for a third time, Matt Allen’s TP52, Ichi Ban, announced the 2021 winner, so will yet again have its name engraved on the Tattersall Cup.

Allen, a member of the Australian Olympic Committee and immediate past president of Australian Sailing, launched Ichi Ban in late December 2017. It has paid him back time and again. 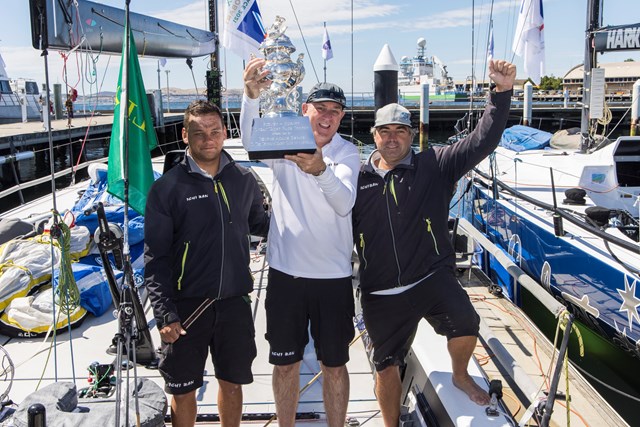 Some of the highlights include a line and overall double in the Newcastle Bass Island Race (its first race) in 2017; then overall wins in the Rolex Sydney Hobart in 2017 and 2019 with a raft of other major victories in between, leading to this latest victory.

“This is a time we will never forget. I have a mix of young, old and wise crew. It was a great opportunity for the guys who worked so hard,” said Allen, who also won the race as crew for Lou Abrahams on Challenge in 1983.

“To win with Ichi Ban a third time is unbelievable. It’s always better, ideally, not to go into the room to decide,” the yachtsman said, referring to two protests against Sam Haynes’ Celestial (including one from Ichi Ban),which finished with a better time but received a penalty in the protest room and so placed second overall to Allen’s boat.

“Rules are a critical part of our sport,” Allen said. “But we had a great neck-and-neck race with Celestial – all the way to Hobart. I completely understand why they would be upset. It was certainly a tussle between the two of us and Quest, until Quest dropped off the back and it was just us and Celestial.

“I was confident one or the other of us would win. We knew the predicted second southerly wouldn’t arrive, and that helped us,” Allen acknowledged. “We knew we’d have our ups and downs, but I always thought we had a chance. We pushed the whole way. It’s the toughest Hobart since 2014 – and it was tough.”

“It’s an amazing moment in time. Trygve designed, built and sailed Freya – that’s amazing. I sailed with Peter Kurts. Love & War is incredible,” he said, referring to her three wins plus a third overall this year.

“Having a big gap between Love & War’s first two and the third win is incredible. I think it would bring a tear to Kurtsy’s eye to see his well-maintained and well-sailed boat still doing so well,” Allen said of the late Peter Kurts.

“I’m in amazing company,” he said of joining the two in being the only ones to ever win the 628 nautical mile race overall three times.

“I look at Azzurro (Shane Kearns’ S&S 34 White Bay 6 Azzurro) that nearly caused an upset again this year until she ran out of breeze), and Love & War, to my boat with the latest in technology and I think about the wide variances in a fleet where anyone can win.

“We’ve spent so many years putting this boat together with two aims – winning the Rolex Sydney Hobart and winning the Audi Centre Sydney Blue Water Pointscore,” the yachtsman said.

“I helped in the design process,” Allen said. “We put the right package together; the boat, crew and culture. We all just go and work and sail hard together; there are no egos on board. It’s a fulfillment of the sailing capability of the crew and the whole project.

“In 2016, I invited Gordon Maguire (a highly respected yachtsman) to have coffee with me and told him I was putting a new boat together. He has been with me since.

“We’ve had conditions to suit these boats the last few years in the Sydney Hobart. You go so fast in the north-easterlies; you go very fast. This year we got southerlies at the start and we were still able to win.”

Allen has been blooded by some legends in yachting. “I always remember my great sailing times with Lou Abrahams – he won two,” says Allen, who had his own first win with the great Victorian yachtsman.

“I always take time out on that first afternoon to think about Lou and Trygve (Halvorsen), and others that I sailed with that meant something to me,” he said.

Allen said the next step is “to take a deep breath, then we’ll do the Adelaide Port Lincoln Race Week and the Australian Yachting Championships.”