It’s gold, gold, gold for the 16ft Skiff Australian Championships being held at Belmont, Lake Macquarie, from Sunday, January 2, as a host of former Olympic champions feature in the 47-strong fleet.

Most attention will be on the all-star crew of the borrowed skiff Fluid, with Nathan Outteridge helming, Tom Slingsby on sheet, and Iain ‘Goobs’ Jensen manning the bow. They’re rivals on the SailGP circuit, representing Japan, Australia and Great Britain respectively, but close mates off the water.

Legends of the 470 class, Nathan Wilmot and Malcolm Page, are reacquainted aboard Ronstan (ex-Growthbuilt), with Lake sailor Brett Davis on sheet and providing local knowledge. Wilmot and Page claimed gold at Beijing in 2008, then Page repeated the feat with Mat Belcher at London. 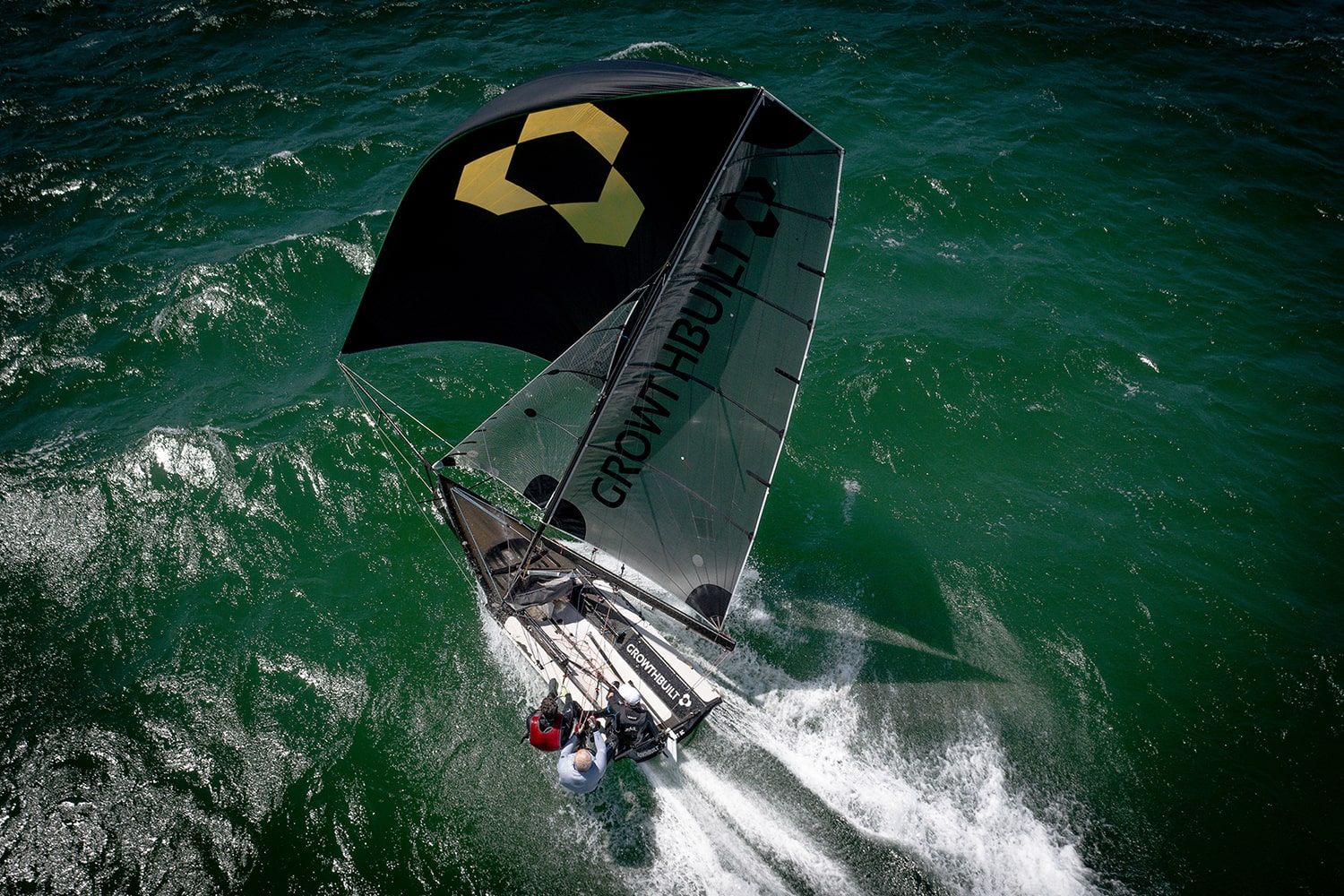 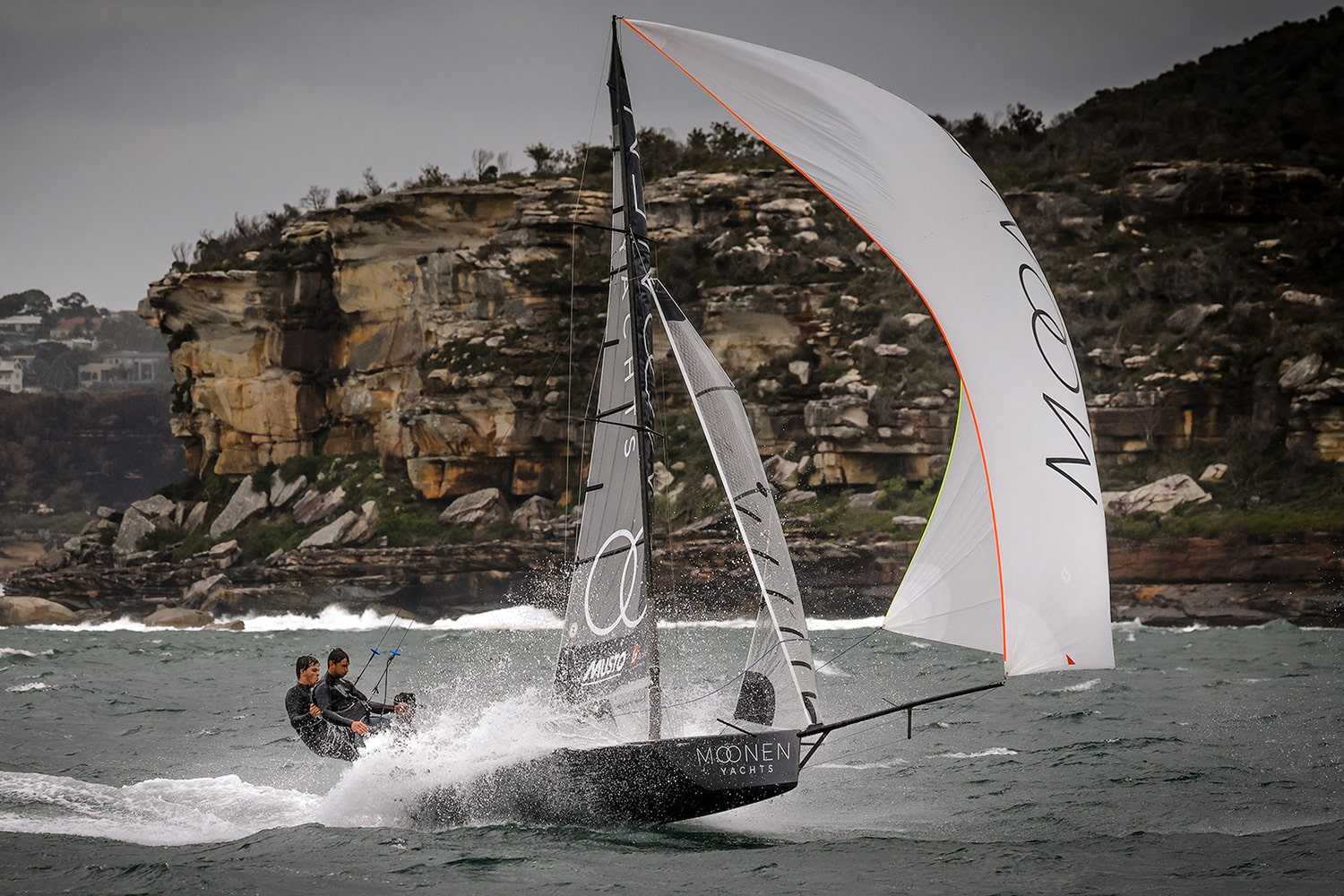 Outteridge and Jensen won 49er gold at the same 2012 Games and silver at Rio, along with multiple world championships. Outteridge recently joined Team New Zealand for the next America’s Cup defence.

Slingsby, recently named World Sailor of the Year for the second time, won his Laser gold in 2012, having claimed six world titles in the preceding years. He admits, laughingly, that a 16ft skiff isn’t his natural territory – whereas driving F50s at 50 knots is.

“Obviously trapezing isn’t my strong point. Really I’m providing a bit of entertainment for Nath and Goobs, who are probably two of the best there’s ever been,” Slingsby says.

“It’s super-impressive to see how their dynamic works. They know what each other’s thinking, so it’s an honour for me to sail with these guys. We’re having a laugh as well, because we’re not here to set the world on fire.”

Competing in the Red Pumps-sponsored 16ft Skiff Australian Championships began as a pipe dream but crystalised when the trio were watching a recent Belmont club race. “We thought, ‘why not?’,” Slingsby adds. “It’s rare that we’re all in the same country and don’t have a commitment. 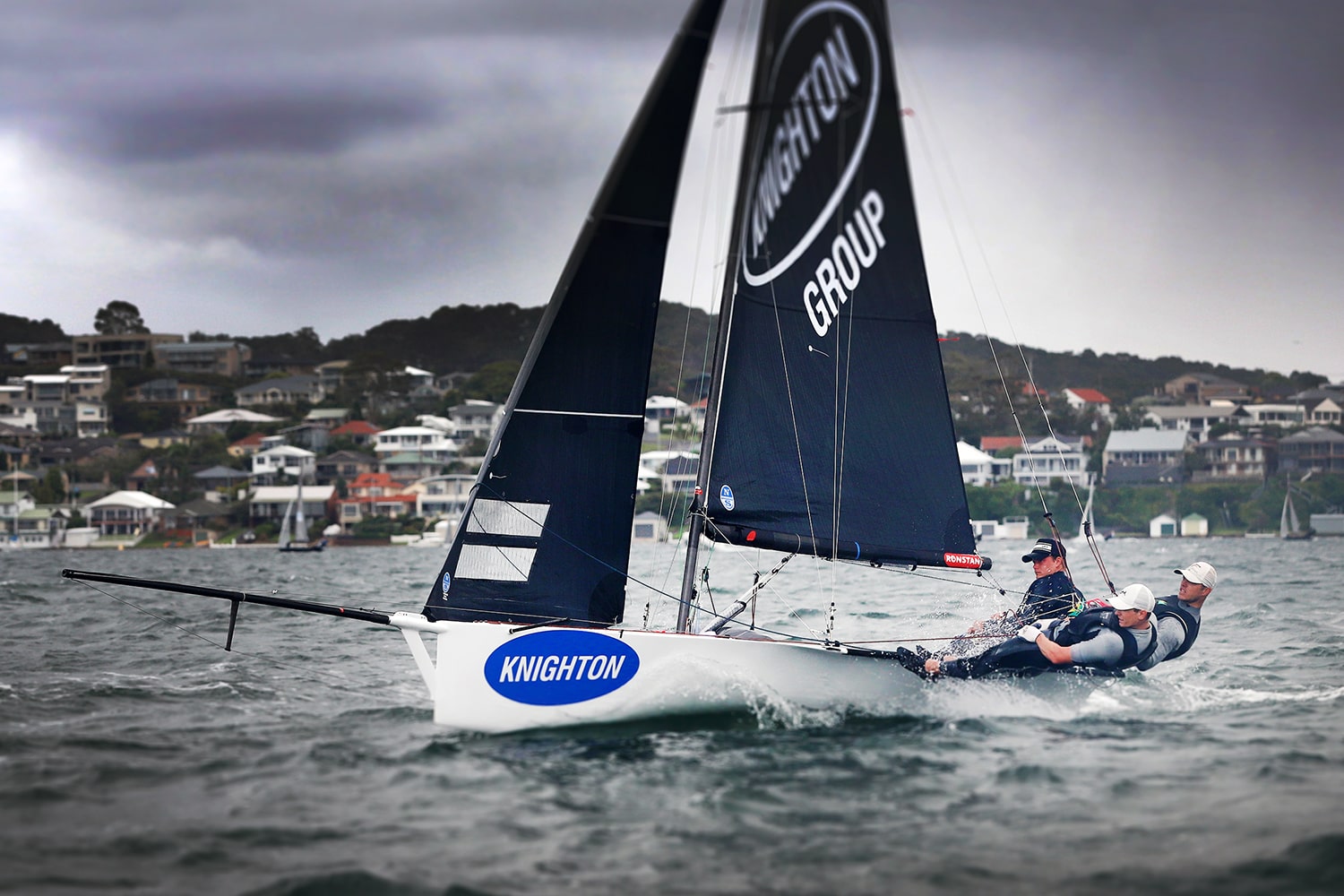 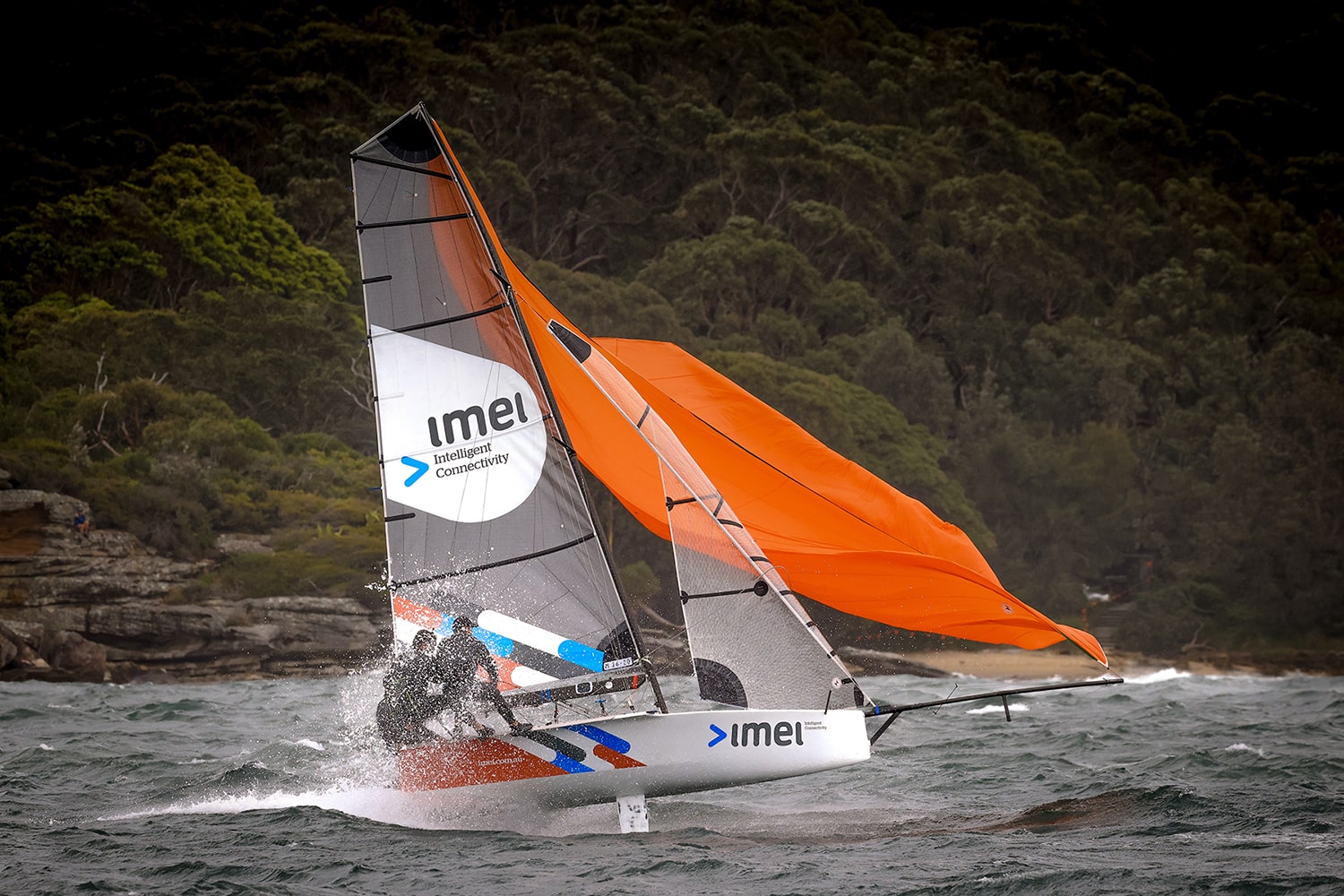 “We’ve got a lot of friends in the class – my brother-in-law is Joel Castle and I’m good mates with Jamie Woods from East Coast Marine, as well as Scott Babbage (SKE Electrical), Daniel Turner (Moonen Yachts) and lots of others. We’ve always followed the class and watched the results.

“Aside from that, Nathan, Iain and I have been talking for a while about sailing together. We’ve competed against each other for years – in Nathan and my case, around 30 years. Fortunately, Clint Bowen and Phil Harmer offered up their boat and within a few days it was happening.”

Outteridge is also relishing the chance to sail with his mates in such a strong fleet.

“We’ll only get five or six training days together before the nationals, so we’re trying to work out what we’ve got with the rigs and our roles,” he says, acknowledging the choice of skipper was a tough one.

“It came down to kilos and I’m the lightest person on the boat. Tom has done a bit of trapping before in the A-Class but I’m calling him ‘Twinkle Toes’ because he’s really graceful. It’s just good fun.”

All agree that an Olympic pedigree doesn’t translate to instant success in the 16s, albeit the Ronstan crew recently handed the Belmont fleet a sailing lesson on their own course in a club championship race. 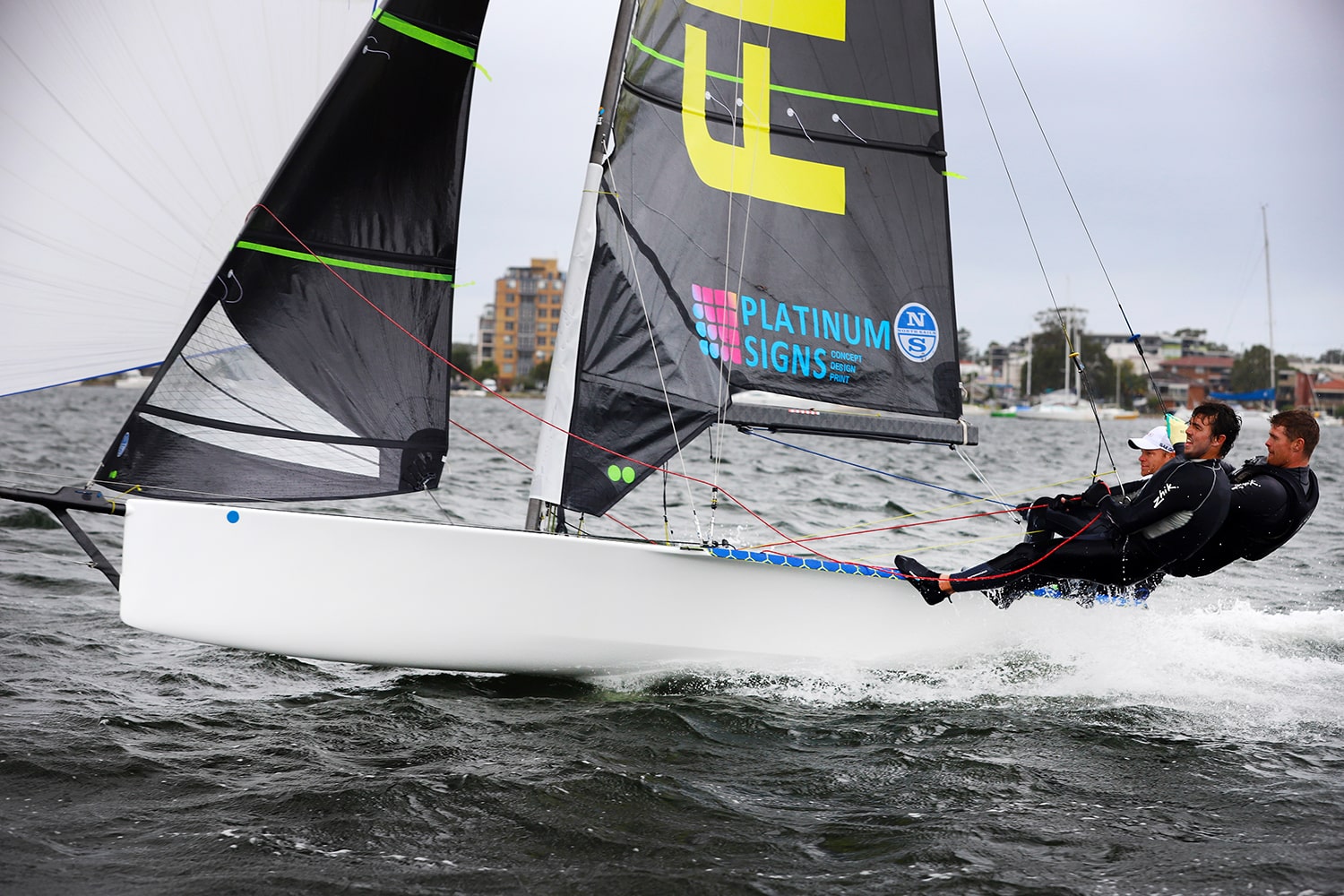 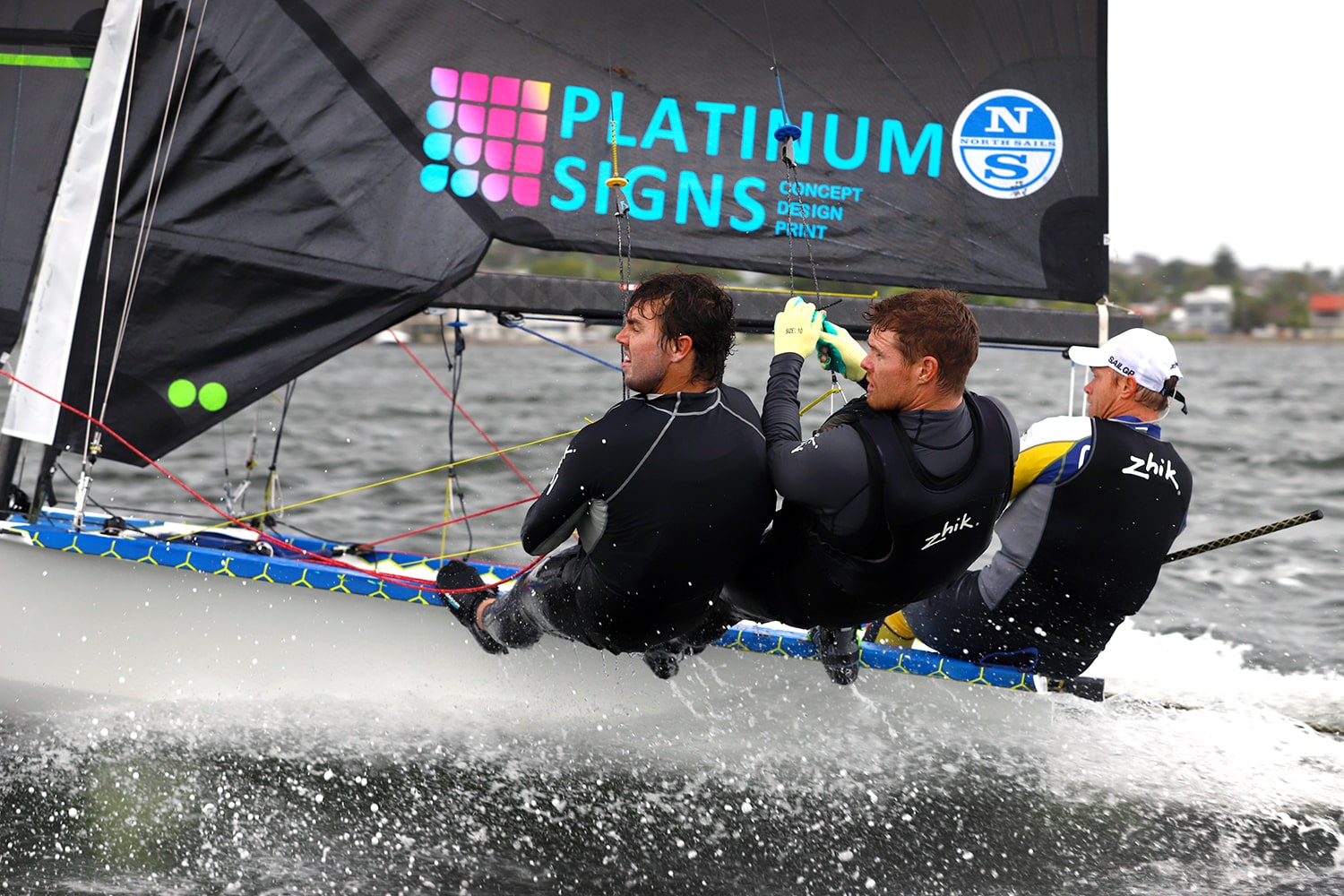 “Do we have a realistic chance? I guess we do, but I feel others have more of a chance because they’ve done more work and sailed more,” he said in a Manly 16s report. “A lot has to go right for us and I wouldn’t like to go in with high expectations.

“It’s sport and there’s nowhere to hide. You need to be good, be well prepared and have some luck.”

Up to a dozen Manly boats will face the starter’s gun on Sunday, including the favourites to claim a second national crown – seasoned campaigners Daniel Turner, Angus Williams and Matt Stenta on Moonen Yachts, runners-up in the recent NSW Titles.

O’Connor: “It’s going to be such a good regatta and you don’t want to miss it … any of those boats in the top 10 could win it. Whoever wins this regatta is a very, very competent sailor because the best of the best are racing.”

Former 18-Footer crews abound throughout the fleet and they’re joined by several up-and-comers from the 13ft skiff development ranks who can all excel in lighter airs. The young Cunninghams crew from Manly can produce the odd upset, as can Eric’s Storage and Red Pumps.

Another leading contender is Contender Sailcloth, Belmont’s reigning club champions. Brothers Will and Richard Howard have just completed the Rolex Sydney Hobart aboard the luckless TP52 Celestial, but will be raring to go again in their 16.

Registration and measurement for the 2021-2022 Red Pumps Australian 16ft Skiff Championships will be held on January 1, with racing to start Sunday and run until January 8. COVID-safe plans are in place.