In all spheres of endeavour or work, there is a multitude, very often the journeymen or the “clock punchers”, who carry out the duties assigned to them by those in charge without query or quibble and little inquisitiveness. Such people are necessary to get things started, built and finished, and are a key requisite for getting products into the hands of customers.

But what of the people to whom these workers report? What sort of leader or visionary motivates, mentors, inspires and pushes such workers to proudly and enthusiastically give of their very best in the belief that they are truly part of something special?

In general, the boating world has been short of such visionaries – people whose inventions truly changed our world and the way in which we live, like Thomas Edison, Alexander Graham Bell, Henry Ford and Bill Gates – but there have been some who have nonetheless made an impression and whose creativity, focus, purpose and gritty determination have left a mark and a legacy for generations of boaters to this day.

In a short series, Danny Casey looks at four of the figureheads who helped turn the nascent boating business of yesteryear into the international marine industry of today.

In this, the first part of our series, we’re going to look at probably the greatest “outboard man” of all, who was also the true creator of the sterndrive to boot. This man was a comrade, a colleague, a contemporary, a co-conspirator and eventually a competitor of the legendary Carl Kiekhaefer of Mercury.

IF TWO MEN’S LIVES and histories could ever be wholly intertwined as to proceed in the same direction, firstly as colleagues and subsequently as fierce competitors, then such a premise certainly applies to the subject of this piece, Charles D. Strang and the subject of our subsequent profile to follow in the next edition: the previously-referenced Carl Kiekhaefer.

This was a truly unique relationship.

It could be argued that each might never have attained anywhere near his full potential had it not been for his exposure to the other. 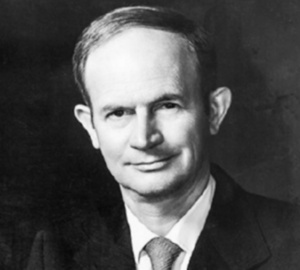 Under Strang’s reign OMC become world leader, not only in outboard sales volume but also in horsepower rating.

For those unfamiliar with these two visionaries, the closest example of a similar comradeship and a subsequent falling-out (although Strang and Kiekhaefer never fell out) would be the departure of Lee Iacocca from Ford after Lee had presented Henry Ford ll with the car that was to send Ford’s profits stratospheric, the Mustang. Iacocca, at Chrysler, and Strang, at OMC, were both thorns in their ex-employers’ sides for years afterwards. While Charles (Charlie) Strang is renowned and venerated for his design of the original Mercury “Tower of Power” inline-6 outboard and his later focus in freshening up the aging product range at OMC and boosting OMC’s heretofore sedentary image with an aggressive competition/racing programme, what is not commonly known is his involvement in the creation of the sterndrive. 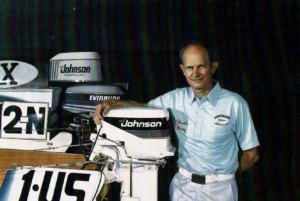 Strang was an avid supporter of racing at all levels.

Jim Wynne (a contemporary of Strang’s at Kiekhaefer) has always been credited with the creation of the sterndrive – and was indeed the man who subsequently made a fortune in royalties from pitching and selling the concept to Volvo Penta in Sweden – but Wynne had little, if anything, to do with designing it.

The truth is that Strang had drawn up and created the whole concept back in 1948, even to the point of utilising an innovative “Hooke’s coupling” (i.e. a universal joint which allowed both lateral and longitudinal movement of the drive unit).

He and Wynne then pitched the concept to Kiekhaefer, who described it as a “horseshit” idea and told them to can it, saying all it would do was adversely affect the sales of higher-horsepower outboards. Wynne, after a subsequent disagreement with Kiekhaefer, left the company in 1959, filed a patent for the sterndrive system and took the idea to Volvo.

All this time, Strang had been more than selflessly altruistic, telling Wynne to “just do what you want with it.” As it turned out, Volvo kept asking myriad technical questions which Wynne was unable to answer, and he had to revert back to Strang for answers – all provided munificently and magnanimously by the man who had walked away from glory, royalties and lifetime financial security. And surprisingly, Kiekhaefer never, ever wondered how Strang was able to come up with Mercury’s own cleansheet sterndrive, the MerCruiser, a little under two years later (1961). 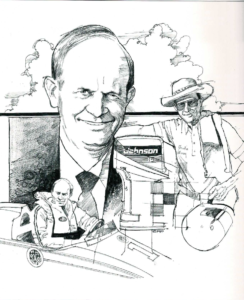 The official portrait of OMC Chairman Charles D. Strang upon his induction into the NMMA Hall of Fame in October 1992.

In 1963, Jack Hanigan, Brunswick’s president, wanted Charlie Strang to be CEO but that could only happen after Hanigan had first fired Kiekhaefer. Strang didn’t want to see Carl hurt (imagine such compassion and sympathy in today’s corporate world!) and didn’t agree with Hanigan’s strategy but, as it turned out, Carl had had enough and left anyway.

Then, in 1964, Charlie also left. One might have thought that someone with Strang’s talent and vision would then have ended up at the only true competitor, OMC. And he did – but neither immediately nor directly. Shortly after leaving Mercury, Charlie was contacted by a multi-state Evinrude distributor, C.W. (Doc) Jones, of Arizona, and Jones wanted Strang to design a special lower unit for the OMC V4 on a hydroplane with which they hoped to set a world outboard speed record.

At the time, OMC’s lower units were rather bulbous and not as sleek and hydrodynamically efficient as Mercury’s. Strang subsequently went to work with gearbox specialists, Hubbell, and came up with a streamlined overdrive unit (i.e. the propeller turned faster than the power unit), and this lower unit subsequently propelled Starflite IV to 130 mph on Lake Havasu in March, 1966.

As it transpired, Charlie’s stint with Doc Jones had been orchestrated by Ralph Evinrude, who wanted Strang on board at OMC but thought he might still have loyalty to Carl Kiekhaefer – so the Jones project was a “back door” strategy by which Strang’s allegiance could be tested. He was eventually hired by OMC and was initially made head of engineering. By the early 1970s (as I covered previously in an OMC-specific piece some years back), Strang immeasurably lifted OMC’s image and amassed glory in the then hugely popular sphere of tunnel-boat racing. The tale has been often told of the first competition OMC V6 being cobbled up with key parts of two V4 crankshafts welded together but with the cylinder bores sleeved so this “hybrid” motor (basically one-and-ahalf V4s with an initial total capacity of 2,448 cc) could run and win in the international 2.0 litre ON class.

Strang’s reign – he became general manager in 1974, president and CEO in 1980 and chairman in 1982 – saw OMC become world leader, not only in outboard sales volume but also in horsepower rating, and the late 1960s up to the early-mid 1980s was generally considered to be OMC’s “purple patch”.

It is unfortunate that Charlie, incisive, intelligent and far-sighted as he was, never managed to see that the future threat to the company came from Shizuoka Prefecture in Japan and not Fond du Lac in Wisconsin. 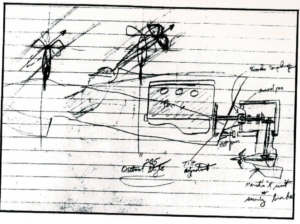 A portion of Strang’s M.I.T invention ledger for 1948, clearly shows the very first depiction of the modern sterndrive, including tilt-trim adjustment.

He retired reluctantly, at 70 years of age, in 1990 – ironically the first victim of a mandated retirement age rule he had himself introduced. After Charlie came the perfect storm of two successive CEOs with no industry knowledge, plus the outsourcing (outlined by me in a previous article) of key parts which had previously always been proudly made inhouse. OMC was by then doomed. Strang himself mused that for OMC to go from a 50% worldwide share in 1990 to a 9% share and subsequent bankruptcy in ten years “took some special kind of talent.” 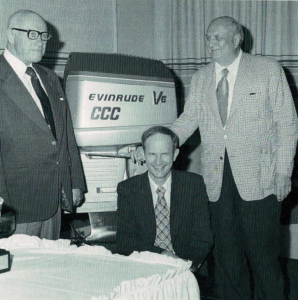 Strang was able to bridge the gap between Carl Kiekhaefer (left) founder of Mercury Marine and then OMC Chairman, Ralph Evinrude.

After Charlie retired, he became a commissioner for NASCAR (in which, of course, he had been involved in the ‘50s with Kiekhaefer), and he also became the representative for the American Powerboat Association (APBA) to the Union Internationale Motonautique (the UIM – powerboating’s equivalent of the FIA).

Although he died in March, 2018, at the ripe old age of 96, an ex-colleague who had telephoned him just months earlier was answered by a voice so spry and lively that he thought he was surely talking to a son of Charlie (Charlie and his wife didn’t have kids). But the absence of a second generation aside, there can be no doubting the indelible legacy this towering alumnus of both US outboard manufacturers left on the marine engine industry. They just do not make guys like this anymore.

Danny Casey is highly experienced, undoubtedly idiosyncratic, and immensely knowledgeable about things mechanical, new or old.  His knowledge and passion are as a result of spending his whole life in or around anything power-driven – especially marine engines.  His passion for boating is second to none, with his life a montage of fabulous memories from decades spent in or around water and boats, both here and in Europe.  Danny has spent myriad years in the recreational marine industry in a varied career in which he has bamboozled colleagues and competitors alike with his well-honed insight. 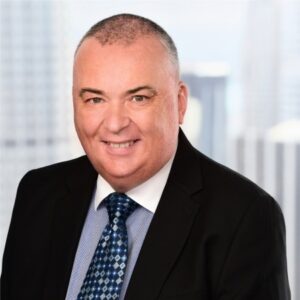 His mellifluous Irish accent, however, has at times been known to become somewhat less intelligible in occasional attempts at deliberate vagueness or when trying to prevent others from proffering a counter-argument or even getting a word in.  Frank and to-the-point, but with a heart of gold, it can be hard to convince Danny to put pen to paper to share his knowledge, but Marine Business News is grateful that he took the time to share this, the first part of a special series to be published over the coming months.  Connect with Danny through LinkedIn.