Riviera, Australia’s luxury motor yacht builder, has celebrated excellence across its Australian and New Zealand representative network with the announcement of the company’s annual dealership awards for 2021.

The presentations were made via video meetings held on the Gold Coast, Sydney, Port Stephens, Melbourne, Adelaide and Perth in Australia, and Auckland in New Zealand.

Riviera was honoured that several motor yacht owners in restricted locations were delighted to participate in the presentation of the awards.

Australasian Dealership of the Year

R Marine Jones at Coomera on the Gold Coast was awarded Australasian Dealership of the Year, recognising the team’s outstanding performance through the year for the service and support provided to Riviera motor yacht owners. This was one of four awards received this year by R Marine Jones.

Dealer principal Randall Jones and partner Melinda Jones praised the team as they accepted the Dealership of the Year Award from Riviera owner Rodney Longhurst. 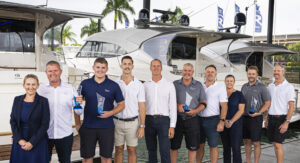 “Our team works passionately to ensure our motor yacht owners are well supported and this award means a lot to us, especially as it is guided by feedback from owners,” said Mr Jones.

“My wife Melinda and I have been associated with Riviera for 21 years now, which represents a significant part of Riviera’s 41 years of history, so for our dealership to receive multiple awards this year is a great honour.”

Event Excellence by a Dealership

“Normally we would have a full calendar organised, but with COVID restrictions we have been taking it one event at a time,” said Mr Jones.

“Our team really enjoy these events because it is boating with the Riviera family and that’s what we all love. Over the past 21 years, we have created so many friendships that we continue to see flourishing at every event we host.”

Service Excellence by an Individual

R Marine Jones service specialist Ben Croft was honoured to have won the award for Service Excellence by an Individual after a career of more than 20 years working with Riviera motor yachts. Mr Croft, who started at Riviera as a boatbuilding apprentice, has a hands-on role in owner care with R Marine Jones.

“I take it personally to make sure I can assist our owners, and I am the type of person who will not stop until I find the right solution,” he said.

Mr Jones said Mr Croft was a deserving recipient of this award.

“Ben is a problem solver who is dedicated to our Riviera yacht owners’ enjoyment and that means a great deal for our team.”

Service Excellence by a Dealership

R Marine Jones also received Riviera’s Service Excellence by a Dealership award for 2021. Mr Jones said he was honoured to accept the award on behalf of his team.

“Customer care is about making sure our owners feel they can call us whenever they need to and know that we will respond as soon as we are able,” he said.

“We are also supported by an excellent network of Riviera dealerships who know our yachts and our owners, so this award also gives credit to the entire Riviera dealer network.”

Sales Excellence by a Dealership

R Marine Flagship in New Zealand, led by Dean Horgan and Suzie Eade, was honoured with the Sales Excellence by a Dealership award for 2021. Mr Horgan described the honour as welcome reward in a challenging year.

“It’s been an incredibly busy year for the entire team and our achievements this year are a credit to their hard work,” said Mr Horgan.

“Our team puts in a massive effort after-hours that benefits our owners enormously,” said Mr Horgan. “From our sales and service team to our captains, their dedication to our training programs gives our motor yacht owners a lot of confidence in their Riviera motor yachts.”

Both awards were presented in Auckland to Mr Horgan by John Wainhouse, who has owned multiple Riviera motor yachts over many years.

Sales Excellence by an Individual

The Sales Excellence by an Individual award was shared by Stephen Porter, of R Marine Jacksons in Melbourne, and Simon Don, of R Marine Sydney.

This is the first Riviera award received by Mr Porter, who has been with R Marine Jacksons for the past 10 years. 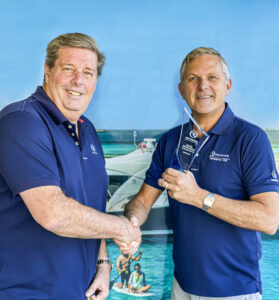 “This award is a credit to the reputation of Riviera, a luxury motor yacht that is among the best from anywhere in the world,” said Mr Porter. “The support our owners receive from our team at R Marine Jacksons, from the Riviera team at the factory on the Gold Coast, and across the R Marine network assists me enormously.”

Mr Porter was presented with the award in Melbourne by proud owner of a Riviera 4800 Sport Yacht Platinum Edition, Paul Crittenden.

Simon Don, from R Marine Sydney, said he was pleased to share the Sales Excellence by an Individual Award with Mr Porter. This is Mr Don’s second award in this category which he previously won in 2019.

“Riviera is the leading motor yacht builder in Australia because of the team at the factory, the service teams within dealerships and the innovative new yachts that Riviera creates,” said Mr Don. “From the moment someone begins thinking of purchasing a Riviera motor yacht they are looked after, and once they take delivery they continue to be cared for.”

Mr Don was presented with his award by Richard Purcell, who has owned multiple Riviera motor yachts, the latest being the Riviera 6000 Sport Yacht Platinum Edition.

Praise for the Riviera dealership network

Riviera owner Rodney Longhurst praised this year’s dealership award winners for their dedication and support of Riviera owners in Australia and New Zealand.

“Excellence in the dealership experience is the first step in creating the ultimate boating experience for Riviera motor yacht owners,” said Mr Longhurst.

“The dedication demonstrated by owner care and sales teams to ensure the best owner experience possible has never been stronger.” 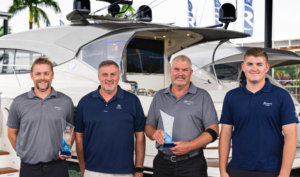 Maintenance Works To Begin At Sorrento And Portsea Piers

Better Australia: Securing the foundations for a stronger and smarter future