To celebrate turning 50 years old, Stacer Australia have decided to share the love and hold a competition to give one lucky person the chance to win a brand new Stacer 369 Territory Striker boat, motor and trailer package, valued at over $10,000.

It has been announced that this lucky someone was Sam Morgan.

According to Stacer, Sam had noticed the competition on a banner on the home page of the Stacer website and decided to give it a crack. From the thousands of entries that were submitted, Sam’s was ultimately chosen as the winner by a vote put to Stacer staff. 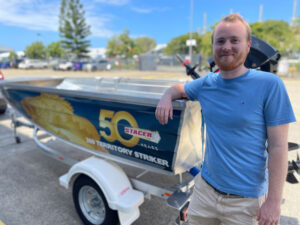 Entrants had to supply an answer to the question: ‘If you won this package, what would be your first adventure?’ The most creative answer would win.

‘What are we doing this weekend Dad?’ Asked the two young sons, inquisitively staring up at their Dad. ‘Well boys, that’s an easy question…’ Dad said smiling. ‘I know how my little SEASPRITEs love to go fishing. So how about you head out with the old SEA MASTER and catch some fish!’ Dad said pointing to himself. Although, Dad thought, I’d better check with the wife before heading out. He wouldn’t want to become an OUTLAW in his own home again! ‘But Dad, you never catch any fish’ said one of the boys with a STINGA of a remark. ‘Mate, that’s just not true! Remember last time when I used my handmade PROLINE? I caught heaps of fish, it’s not my fault the SEA RANGER said they were all undersized.’I had better remember to take the ruler this time thought Dad. He wouldn’t want to send the OCEAN RANGER into a RAMPAGE again…’Who has left their fishing gear all over the back deck’ yelled Mum interrupting Dads train of thought. ‘Not us’ the boys chanted in unison, smartly getting out of the CROSSFIRE, as Dad looked nervous. ‘Well yes, I did leave it there, but only because we are about to use it’ said Dad quickly trying to dodge an ASSAULT from the PRO. ‘Oh ok, where are you boys going then? And don’t do another SEA RUNNER and get stuck,’  Mum said with a laugh. ‘Not a chance’ said Dad. ‘I’ve got a Stacer now, best boats in the business. They never get stuck, they’re real SKIMMAs. ‘Sounds good’ replied Mum. ‘And I suppose this time you won’t have Granddad with you, egging you on to dangerous areas. He really is a WILD RIDER.’ ‘Yep, he sure is’ agreed Dad. ‘Anyway, you boys better head off’ Mum said with a smile thinking about the nice quite day that lay ahead and knowing that some of the greatest adventures to be had are with a Dad, his sons and a boat. And without hesitation the Dad and his sons BOLTed off into the backyard to prepare the 369 TERRITORY STRIKER for its first ever adventure with many more to come…

Yep, Sam managed to work in every boat model Stacer make into his answer.

“This is just absolutely life changing for me and my family,” said Sam. “We’ve got two young boys and they cannot wait to get out in the boat fishing. This boat is probably going to be the start of a bit of a family legacy, and hopefully one day I can pass it onto the boys.”

The boat features Stacer’s limited edition 50 Year Anniversary wrap, which is an eye catching blue and gold – so the Morgan’s definitely won’t be missed out on the water!

Stacer Australia have sent warm congratulations to Sam and thanked all those who have entered the competition, stating “here’s to another 50!”.