A regatta like this deserved an exciting climax, not an ‘anti’ one, yet the wind gods could blow no more yesterday after giving their all during the 2022 Red Pumps 13ft and 16ft Skiff Australian Championships held by Belmont 16s on Lake Macquarie.

The script had been written for a three-way battle with IMEI and Moonen Yachts, but you simply can’t race without wind. The fleet did get a start in, under black flag, but the breeze swung 50 degrees and the top mark was pulled on the first work. The time limit then expired. 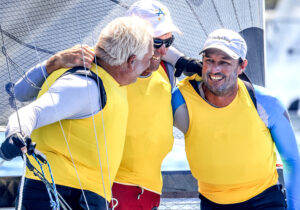 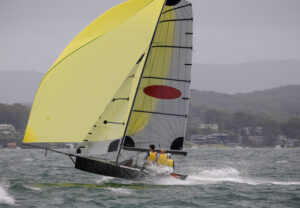 “I’ve done a lot of nationals and to finally win one, and to win it with Mal and Bretto is fantastic,” a relieved Wilmot said. “At the top mark the three of us were probably going to be two, three and four anyway. In the end there was no wind – an unfortunate way to win it but nice to finally get it out of the way.”

Wilmot borrowed the skiff, formerly Growthbuilt, from his cousin then went to see sailmaker Robert ‘Baz’ Atkins at Truflo Sails.

“We asked Baz what sails need to be replaced and he said, ‘all of them’. That was a week before Christmas so he spent the whole time making us new sails. Even last night, he went back to Sydney to rebuild our ripped spinnaker in case we needed it.

“He got us there and got us a national championship with it.”

Davis, a Belmont local, last had his hands on the silverware in 2002-03 when he won with Greg Searant and Stephen Newell.

“I honestly never expected to win another. I’m so grateful these guys asked me to come and sail. I actually spoke to Nathan about 12 months ago and he said I’d have to be under 100 kilos – that was a fair challenge,” Davis said. 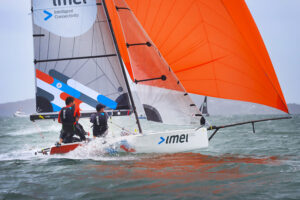 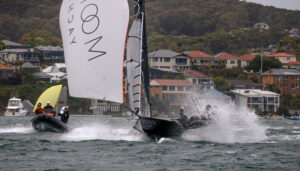 In the end, he tipped the scales at 95kg.

Ronstan rued a torn spinnaker in Race 8 but can look back and thank NFPG, which capsized a boat length from the line while leading in Race 4. The fortuitous point they gained proved critical in the wash-up.

IMEI began the week with a 12th after skipper David Gilmour’s hiking strap broke and he fell overboard. They then posted an 11th in Race 3 but came home with a wet sail to claim second place. There was also some good news for the crew yesterday, with regular skipper Doc (Dave O’Connor) announcing the birth of his baby. They just couldn’t bring home the title.

“A north-easterly was meant to come through but a westerly seemed to be fighting it,” Gilmour explained. “We got about halfway to the top mark and the wind started to shift, then it completely died.

“We were lifting to the mark with a bit more breeze than the rest of the fleet. We were looking pretty (but) it was within the race committee’s rights to abandon the race.

“We’re happy with second. Would’ve been nice to make a few less mistakes but the Ronstan guys sailed a very consistent event and deserved the win.”

Third-placed Moonen Yachts skipper Daniel Turner needed some variables on the race track but not what eventuated. 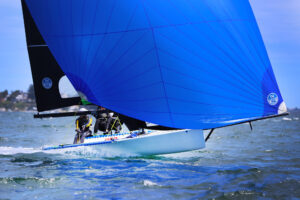 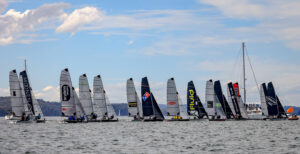 “We would’ve paid good money to see the race roll out. Ronstan was on our hip and we felt like we were gaining on them. So it was looking good for us and IMEI,” he said. “Unfortunately, the longer you stay in the fleet, the more a podium feels like you just didn’t get there but we can’t take it too hard.”

Bryden’s Lawyers held on for 4th and Fluid finished 5th, the star crew of Nathan Outteridge, Tom Slingsby and Iain Jensen having fun doing so. They hit speeds of 25 knots in the skiff – half that of what they’re used to on the SailGP foilers.

“We had the pumping nor’easters that Belmont often provides and I’m happy to be racing back on Lake Macquarie – it has been a long time,” Outteridge said. “We felt like we left some points on the table but I also think we jagged a couple.

“On the way here, Tom was already talking about how we can compete in the upcoming Sprint series. It was a pleasure to sail in the fleet and we look forward to coming back.”

Otherwise, the next time Outteridge and Slingsby see each other, they’ll be facing off for the SailGP final in San Francisco USA in March, wearing the rival helmets of Japan and Australia.

“Looking forward to SailGP,” Outteridge adds. “It will be nice to be foiling again and sailing around the track a little bit faster and a little bit drier.”

The youth title went to the Lancelin team of Brendan Crisp, Fynn Sprott and Tom Cunich. “We’re new to it, so pretty happy to be out here with everyone, not just the youth sailors. To mix it with guys who’ve done heaps in the sailing world is such a great thing to do,” Crisp said.

Georgia Steenson, steering Bella Group with Michael Hochguertel and Rory Murtagh, claimed the female sailors’ award from Capital Brewing’s Jessica Iles and Marilyn Sorensen on Shead. “It’s a good competition between the female skippers and we’ve done pretty well overall,” Steenson said. “I moved up from Flying 11s so the boat is a very different to what I’m used to, but really fun.”

Manly sailors Max Downey and Thomas Mountstephens were crowned 13ft Skiff champions after posting seven wins from as many starts aboard Cheeky. It wasn’t always as easy as that score suggests.

“We had our most drama on the first day, with a few breakages,” Downey, 17, said. “We capsized after crashing into a 16 that my brother sails (Fireball) and we broke the trap elastics. Then, on the last upwind, the jib shackle let go so we sailed half of it with no jib and crossed 12 seconds in front. Pretty lucky.

“Next season I’m looking to steer a 16, so if anyone has one they want me to steer, let me know … otherwise I’ll buy a boat.”

Next on the 16s’ calendar is the 2022 Australian Sprint Championships, also to be hosted by Belmont, on February 5.