Festival of Sails starts countdown for 180th event in 2023!

As the curtain closes on the 2022 Festival of Sails, the countdown for Australia’s oldest annual sporting event has begun, as it heads towards its milestone 180th event in January 2023.

Delivered by the Royal Geelong Yacht Club (RGYC), the Festival of Sails is older than Wimbledon, the Ashes, the Melbourne Cup, and the modern Olympics. 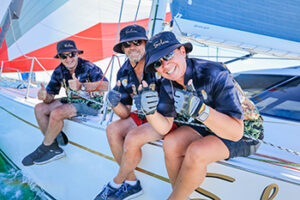 This year’s event was the first full sailing program delivered after two years of COVID-19 restrictions and RGYC Commodore Stuart Dickson said it was clear the racing crews had been keen to get back out on the favored waters of Corio Bay.

“It really felt like a long overdue reunion and seeing more than 200 boats take off for the start of the iconic Passage Race from Melbourne to Geelong to kick off the regatta was a sensational sight,” he said.

“We have been very lucky that through these turbulent times for major events, we’ve had the consistent and generous support of the Victorian Government and the City of Greater Geelong which allowed us to deliver the Festival yet again.”

The Geelong Advertiser AMS Teams Trophy was won in a tight finish by Sandringham Yacht Club with a one-point lead over rival Royal Victoria Yacht Club.

Festival of Sails Chairman Roger Bennett said he was delighted with the event and the enthusiastic and positive feedback from the sailors.

“We’ve had a great regatta,” he said.

“Now we have our 180th event in our sights for next year, which is an extraordinary milestone for any event and one we will be very keen to really celebrate with our sailing competitors and the broad Geelong community and visitors to Geelong.”

COVID restrictions over the past two years have meant the traditional community waterfront festival, which normally attracts thousands of people to the Geelong waterfront, has had to be cancelled.

But Commodore Dickson said he was extremely hopefully that the Festival’s full program both on, and off the water, would be back in full swing in 2023.

“Events like the Festival of Sails really do deliver strong economic benefits to our region, and we’re keen to leverage that potential again, particularly with such a headline to celebrate.”

“The Festival is a really important part of the Geelong community calendar and normally a major drawcard for local families and visitors, and we very much want to have everyone back enjoying the racing, the entertainment and a 180th birthday party. You don’t get to do that too often!” he said.

“We’ve got our planning hats on already and are keen to make sure the 180th celebrations go off with a real bang. We want it to be our biggest and best event ever!”