A gruesome shark attack which claimed the life of a Sydney swimmer this month was the first in 60 years, but was far from unprecedented.

A century ago, the harbour city was the scene of a series of terrifying encounters that continued for a decade and left authorities without answer.

On March 12, 1922 an estimated 80,000 anxious Sydneysiders lined Coogee Beach and its surrounding clifftops, hoping to catch a glimpse of bloody battle.

Transfixed with anticipation, they looked on as a small group of New Caledonian sailors gripping sheath knives and marlin spikes between their teeth, swam beyond the breakers.

The Loyalty Islanders, crewman from a visiting steamer, had taken up a reward offer to catch and kill the shark or sharks responsible for two deadly maulings the previous month.

Both had occurred at Coogee before crowds of horrified onlookers.

In the wake of the killings, Sydney was said to be gripped by panic.

The city’s newspapers were consumed by shark talk, its beaches left deserted from north to south and its residents obsessed with how to end the reign of terror.

Bounties were posted for any sharks caught off Coogee and bonuses promised for the ones shown to have claimed the lives of the two young men. 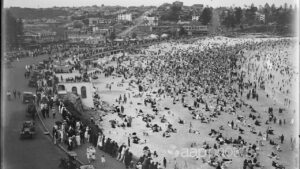 Sydney’s Coogee Beach was the scene of two fatal shark attacks a month apart in 1922. Image by ERNEST FOSTER

Would-be slayers armed themselves and patrolled the beach in boats.

Sightseers repeatedly flocked to witness the potential hunts and several sharks were captured and their carcasses displayed. None though, were thought to be one of the man eaters in question.

One rather drastic suggestion to eliminate the predators was to bomb the bay with explosives but this was quickly rejected by authorities.

A hundred years on, shark news has again hit Sydney, with Wednesday’s fatal attack killing a swimmer at Little Bay in the city’s east, and sparking a hunt for a shark reported to be a four-and-a-half metre great white.

Along the same stretch of coastline the attacks of yesteryear are the subject of a two-part podcast called Shark Attack of the Century as part of the Forgotten Australia series created by Sydney-based writer Michael Adams.

Coogee Surf Life Saving Club, two of whose members would attempt to rescue one of the victims, has also commemorated the tragedy by funding the restoration of his long-ago vandalised headstone in nearby Randwick Cemetery.

Current president Todd Mison earlier this month told local magazine The Beast the extraordinary incident was undoubtedly “a big part of the history of our club”.

The teenager, Milton Coughlan, was a popular and by all accounts exceptional local athlete. He himself was a lifesaver at North Bondi and had helped prevent a drowning at Maroubra the week before his death.

With some 6000 spectators gathered to watch the club’s annual carnival on an overcast February 4, the 18-year-old decided to go for a body surf before the afternoon’s events got underway.

Plunging into the roiling ocean from the rocks beside the clubhouse, he swam out, caught a wave into the beach and twice repeated the feat. However Coughlan’s fourth outing would prove fateful.

Encountering the shark while again stroking towards the break, he reportedly had the presence of mind to shout to other swimmers to get out of the water but there was little he could do to protect himself.

The assault was as swift as it was brutal.

In the days following, newspapers would carry graphic reports of the attack nationwide and beyond.

“The horrified crowd next saw for some minutes a shark and the swimmer thrashing around in a welter of blood-stained water and scarlet flecked foam,” according to the Cairns Post.

“With one snap of its jaws the brute tore off Coughlan’s arm but the plucky boy … tried to beat off his savage assailant.”

Meanwhile, Coogee clubman Jack Chalmers had set off from the beach, 35m away. He arrived and grabbed Coughlan as several sharks began to circle but struggled to bring him back to shore.

Thankfully, a second lifesaver, Frank Beaurepaire, soon reached the pair and helped guide them back to safety.

It was a valiant but ultimately fruitless effort. Coughlan had lost one arm and the other dangled by a thread. Despite being tended to by a doctor at the scene, he died of blood loss within 25 minutes.

Both Chalmers and Beaurepaire, an Olympian and multiple Australian swimming champion, were hailed heroes and awarded the Albert Medal for bravery, considered a civilian equivalent of the Victoria Cross.

Beaurepaire would later go on to be elected Melbourne lord mayor and was said to have used an amount of reward money to found the Beaurepaire tyre company.

While wishing to downplay his own role, Chalmers praised young Coughlan.

“The way he fought the shark right to the end was, to say the least of it, game considering the frightful injuries he received,” he told the Sydney Morning Herald.

“When I reached him, the shark was still tugging at one of his arms and the water was stained with his blood, yet he managed to turn his back to me … and say, ‘hang on to me tightly’.

“Then he collapsed and shark released its hold.”

Thousands of mourners, including hundreds of lifesavers attended Coughlan’s funeral on February 6.

His death was the best-known of Australia’s so-called ‘shark era’ of the 1920s and 30s, when 15 people were mauled off Sydney’s beaches alone, 10 of them fatally.

In the four decades following World War I, there were more than 100 attacks in Australian waters in total.

The same month Coughlan was set upon, a man disappeared at Bilgola, on Sydney’s northern peninsula. It was presumed he’d been taken by another or possibly even the same shark.

Then, on March 2, drama erupted anew at Coogee.

Mervyn Gannon, a 21-year-old local repair shop worker, was surfing about 20m off the beach when attacked by what was thought to be a three-metre mako or blue pointer.

Witnesses would tell of him striking at the shark as it lunged at him but when he withdrew his right fist from the waist-high water, all that remained was a bloody stump.

Beach inspector John Brown and bystander Ernie Carr charged into the shallows and began pulling Gannon towards the sand but the shark wasn’t finished.

“It came at me again,” Gannon would recall from his hospital bed.

“I tried my left this time but it was no good – it got me again. Then Brownie and the other chap reached me.

“We were getting along nicely when the shark tore at my back. I thought my heart would stop beating but we managed to get in.”

Gannon told his distressed aunt that although he would likely lose both arms, he thought himself lucky because he at least wasn’t going to die.

Despite his incredible courage, though, he would succumb to gangrene.

In the days following neither the New Caledonian divers nor local mercenaries managed to sight the killer shark or sharks.

There would be six further fatal attacks in NSW over the next two years.

In 1924, a woman would also have her left leg and right foot bitten off at neighbouring Bronte Beach, while Coogee Surf Life Saving Club member Jack Dagworthy, 16, would lose his leg in an attack in 1925.

Coogee was also the scene of one of Australia’s most infamous shark-related stories in April 1935, when a tiger shark caught off the suburb disgorged a human arm.

Fingerprints lifted from the limb established that it belonged to missing petty criminal, James Smith, while further examination revealed the arm had actually been removed with a knife.