Deputy Premier and Minister for State Development Steven Miles said the Business Case delivers on an election commitment and identified investment in the Cairns Marine Precinct (CMP) including into a potential common user facility.

“The CMP is already northern Australia’s leading hub for the repair and maintenance of defence, commercial and recreational vessels,” Mr Miles said. 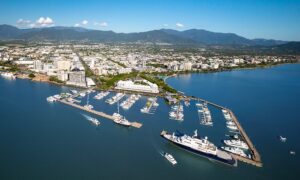 Aerial view of the Port of Cairns. Credit: Ports North

“The Common User Facility would significantly enhance the capability of the Cairns maritime industry.

“Providing opportunities for industry and local maritime businesses to be more involved in maintenance work, a common user facility and associated infrastructure would be a further boost for local shipyards and would offer additional paint and blast facilities, hardstands and a ship lift.

Mr Miles said the $2 million business case, was funded as part of a $30 million commitment by the Queensland Government, and has found significant economic benefits would flow from new facilities.

“It would take the precinct and local maritime businesses full steam ahead into new opportunities for more maintenance work on naval, border force, commercial and superyacht vessels,” he said.

“The $2 million detailed business case was fast tracked by the Queensland Government and has now been delivered on-schedule so we can consider future growth opportunities in this region.

“The business case will support and encourage further investment in infrastructure in the precinct and promote future growth of FNQ and create more highly skilled jobs in Cairns.

“The other $28 million of Queensland Government funding is already being invested in Ports North acquisition of strategic port land and in new infrastructure to support existing and future common wharf usage.

“This is a crucial investment in Queensland’s economic recovery and more jobs for Far North Queensland.

“The CMP and its supply chain employs approximately 4600 people and the Queensland Government’s current investment in more wharf infrastructure is expected to create 150 jobs during construction.”

Mr Miles said the Queensland Government would now consider recommendations from the detailed business case, including the potential to pursue joint state and Commonwealth co-investment for a common user facility.

“Construction of a common user facility would allow local service providers to pursue additional maintenance work from the private sector as well as from the Royal Australian Navy and Australian Border Force.

“The Department of Defence has been a significant stakeholder in the development of the business case and discussions on defence planning and requirements will continue.”

“This has been an inclusive, well-coordinated and robust business case representing the various considerations of all three local shipyards and other key industry stakeholders,” Mr Downing said.

The $30 million commitment to the CMP aligns with the Queensland Government’s Defence Industries 10-year Roadmap and Action Plan, which is focused on growing capability in the state and supporting Queensland defence firms to access new opportunities and create new jobs.

METSTRADE 2021: Leisure marine sector getting ready for business in Amsterdam