Dredging about to start at Two Rocks in Western Australia

Skippers navigating Two Rocks Marina in Western Australia are asked to take extra care during the next few months as maintenance dredging is undertaken at the facility.

Department of Transport (DoT) Coastal Facilities Director Donna West said around 4,000 cubic metres of sand would be taken from the marina to restore channel depths and ensure safe navigation for users. 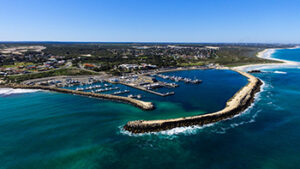 “The $300,000 project will take about two months to complete with completion scheduled for late April,” Ms west said.

“DoT has a number of projects underway at Two Rocks as part of a major improvement program including the recently announced $3.1 million southern foreshore landscaping, new toilets and parking upgrades that will provide a space that can be enjoyed by the community.

“A further $3 million is being spent on targeted landside renewal with the demolition of aged buildings and upgrade the aged utility services including a new fire services network to allow construction of modern purpose-built seafood receival depots by local operators.

“These projects add to the nearly $19 million DoT has spent since 2014 on the removal of abandoned vessels, the installation of new modern floating jetties and replacement of the aged, fixed P Jetty, refurbishment of the West-Link Jetty, removal of the original fuel jetty and other old structures, and improvements to the breakwater structure.

“The maintenance dredging project will improve day-to-day operations at the facility and complement the many upgrades and improvements completed and in progress at the marina.”

Skippers navigating near the dredge should always make radio contact to ensure it is safe to pass. The radio frequencies are:

The work will be carried out using a jet-suction dredge with a 40-metre floating pipeline marked by orange buoys and flashing orange lights.

Further information is available to skippers on the Temporary Notice to Mariners Perth page.