Marine Rescue NSW volunteers conducted 159 rescues over the long weekend, with fine weather and favourable seas bringing large numbers of boaters out on the State’s coastal and inland waterways.

Rescues occurred from Point Danger in the State’s north to Eden in the south, and inland on the Murray River at Moama.

While the majority of rescues were for boaters experiencing engine or battery failure or running out of fuel, there were several serious incidents including the grounding of vessels at Newcastle and Lake Macquarie, and searches for missing boaters at Port Stephens and Moama. 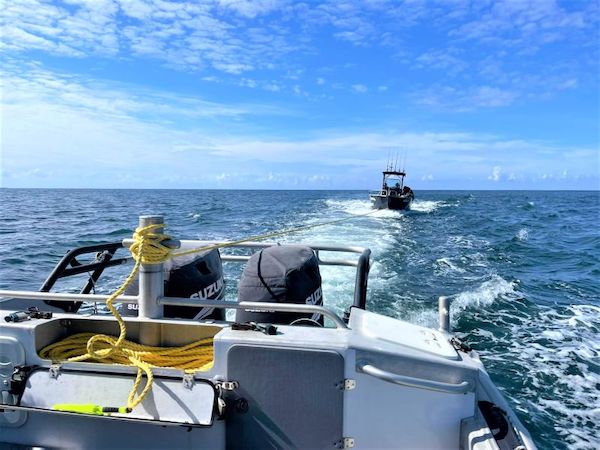 Broken down boat is towed by Marine Rescue Shellharbour on the Easter long weekend.

Minister for Emergency Services and Resilience, Steph Cooke, said it is important those on the water take the proper precautions and follow the advice of authorities like Marine Rescue NSW.

“The key to a safe and enjoyable day out on our State’s beautiful waterways is being well prepared, and keeping across the weather conditions,” Ms Cooke said.

“As we’ve seen in recent weeks, the weather can change quickly with very little warning. With the ANZAC Day long weekend just days away, I want to remind all boaters to take the time to prepare themselves before heading out on the water.”

Marine Rescue NSW Commissioner Stacey Tannos said there were a few simple tasks that boaters could do now to ensure that they didn’t end up at the end of a tow rope after being rescued by one of the service’s rescue vessels.

“This ANZAC Day long weekend, make sure you have enough fuel for your journey with plenty in reserve,” Commissioner Tannos said.

“Check your battery is in good order, and don’t head out unless your engine has been recently serviced. Check the weather and sea forecast is suitable, and most important of all, make sure that you, and everyone on board, are wearing a lifejacket.”

“It’s also essential to let someone know where you are going and when you are returning. You can do this on the Marine Rescue app or on your marine radio on VHF Channel 16. We’ll watch out for your safe return, and start searching for you if you are overdue.”

Maintenance Works To Begin At Sorrento And Portsea Piers