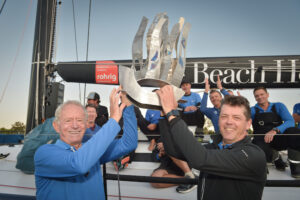 Alive crossed shortly after Black Jack in a time of 17 hours, 3 minutes and 48 seconds.

Two race yachts were forced to withdraw during the race – Not A Diamond due to a broken rudder and Ignition because of a broken forestay. A third yacht, Crankster was delayed at Caloundra dropping an injured crew member off for medical treatment but was back in the race shortly after.

Ian Gidlow, Commodore of race organising club, Queensland Cruising Yacht Club (QCYC) – who has been Commodore for nine Brisbane to Gladstone Yacht Races – says it was easily the best race start in the history of the race topped off with a new race record at the finish line this morning.

“Yesterday’s race start was truly spectacular and the finish equally as thrilling with Black Jack beating its own race record,” Mr Gidlow said.

“The crews that have arrived in this morning have reported that wind conditions were stronger than expected as they sailed through the night reaching 25 to 30 knots at times,” he said.

The rest of the fleet is expected to start arriving after 1pm today in Gladstone.

Alive is currently leading on handicap.

The Brisbane to Gladstone Yacht Race is celebrated throughout the Easter weekend thanks the Gladstone Regional Council’s ‘Easter in Gladstone’ https://www.gladstone.qld.gov.au/easter