Despite the rain for most of the four days, show organisers say that “the 33rd annual Sanctuary Cove International Boat Show (SCIBS) has upped the ante again, cruising into another successful year with outstanding attendance contributing to climatic sales and an exuberant atmosphere”.

Their post-show report describes that “across four action-packed days, SCIBS welcomed 43,852 boating enthusiasts to the sold-out show to view more than 1,000 products and 600 vessels from over 337 exhibitors with an impressive 251 boats on water, a 20 per cent year-on-year increase”. 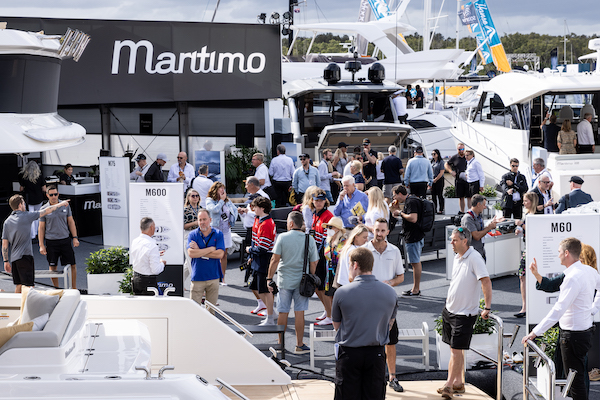 “SCIBS rolled out the red carpet with a show stopping line up of global and Australian premieres, including launches from local manufacturers Maritimo and Riviera, alongside other luxury superyachts, trailer boats, personal watercraft and the latest marine technology”.

“SCIBS 2022 was the hottest ticket on the Gold Coast this weekend, attracting a high-calibre audience that translated into resounding commercial success in terms of sales,” Mr Hasser said.

“The economic impact of SCIBS 2022 will continue to influence the event, tourism and marine sectors, fuelling sales, creating employment, generating tourism dollars and increasing visitor nights in the region.”

“We’ve seen sales across a number of models, both new and preowned, including the Neel-Trimarans Neel 43, which had its Australian launch at SCIBS,” Ms Crook said.

“The Show isn’t just about sales; it also gives us the opportunity to meet our wonderful clients and team members who have been stuck over borders throughout the pandemic.”
Victoria-based Whittley Boats Sales & Marketing Director Alan Whittley said this year’s SCIBS generated the brand’s strongest sales ever.

“We were surprised with the number of people we had through, weather permitting, with particularly high sales across the larger CR sports cruiser series and SL performance fishing series models,” Mr Whittley said.

With the Australian-first showing of the Sea Fox 328 Commander, the 2022 Sea-Doo Fish Pro range and 12 new colourways of the SEABOB lineup, JSW Powersports General Manager Tom Niederer reported an elevated level of enquiry across the four-day event.

“We were thrilled to show off our massive range with a record show of Sea Fox, Malibu, Axis and SEABOB products,” Mr Niederer said.

Sunpower Yachts Managing Director Grant Hudson was similarly impressed by the number of people through the doors and the interest around the solar-powered technology on board their vessels.

“It’s amazing to witness solid chatter in the industry around the move to solar electric technology and we can’t wait to see what the next few years will bring,” Mr Hudson said.
SCIBS 2022 also marked a momentous milestone with major partner Bentley Brisbane & Gold Coast, which celebrated a decade-long association with the Show with the display of four custom cars specially commissioned for the occasion.

“We’ve seen incredible uptake throughout the Show with three new Bentleys sold as well as immense interest in our bespoke Bentley by Mulliner program, which saw more than 15 people meet with our onsite designers to customise their cars,” Mr Wright said.

Head of Volvo Penta Martin Skoglund said: “We were so excited to be back for another year at SCIBS as our stand presence continues to increase year on year.”

“Overall, we’ve had a great turnout and have loved the opportunity to meet with customers, show support to our OEMs and further grow the Volvo Penta brand,” Mr Skoglund said.

BLA Marketing Manager James King said: “We haven’t been to SCIBS since 2019 and it’s so exciting to find our way back on the boat show circuit.”

“We have not only had interest and enquiries across our range of stocked brands, but the event has also been an opportunity to reenergise our staff as their hard work from the past two years starts to pay off.”

“There is such an industry buzz with consumer demand for products and it’s great to see marine lifestyle lovers all gathered in one place at SCIBS – the atmosphere at this year’s event has been amazing,” Mr Triplett said.

“Riviera welcomed many returning and new owners to our family with yachts purchased across the exceptional 24-model collection of sport yachts, SUV, sport motor yachts and motor yachts as part of the exclusive Riviera Festival of Boating held at our SCIBS display,” Riviera Owner Rodney Longhurst said. 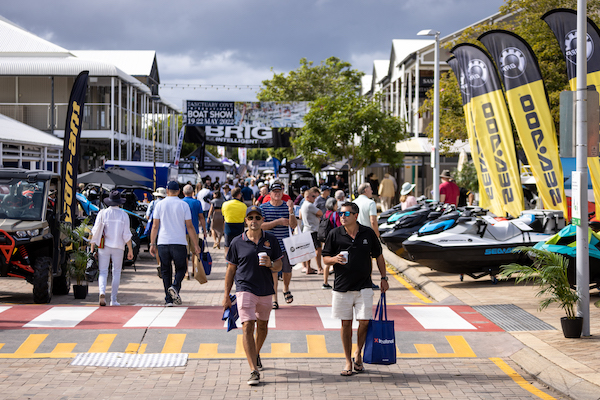 Leading Australian luxury cruiser manufacturer Maritimo had an exceptional reception for its three global exclusives, the M60 Flybridge Motor Yacht, M600 Offshore Flybridge and S600 Offshore Sedan, with a number of sales on the board.

Managing Director Tom Barry-Cotter said: “It’s fantastic to have a show like SCIBS, especially for Australian manufacturers, to use as a platform to launch new models direct to serious buyers.”

Princess Yachts Australia also debuted a world premiere on water with its award-winning, upgraded F Class 55 Flybridge Yacht. Dealer Principal Greg Haines said: “SCIBS 2022 has been a fantastic event for Princess with lots of interest in the brand and plenty of people attending despite the wet weather.”

Sanctuary Cove also saw the flow-on effects from the engaged audience with Mulpha General Manager for International Sales & Marketing John Hughes noting the sale of two apartments in the luxury Harbour One complex.

“We not only sold boats but properties, too,” Mr Hughes said. “We saw very strong interest in land and apartments throughout the Boat Show with a steady stream of buyers in our property showroom.”