Maritime Safety Queensland (MSQ) say that if things go wrong when you are boating and you suddenly find yourself in the water, wearing a lifejacket is your best chance of keeping your head above water long enough to be rescued. 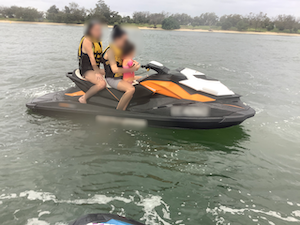 In terms of statistics, the life-saving qualities of lifejackets are not in dispute. It’s why we mandate that properly fitting lifejackets in usable condition be carried for all persons on board.

It’s also why we mandate that lifejackets be worn by all persons in open boats under 4.8m when crossing coastal bars and by children under 12 at all times; and why we recommend skippers, crew and passengers wear them whenever they are underway.

From almost 1000 vessel intercepts in South East Queensland in December and January; roughly 1 in every 5 boats either didn’t have lifejackets that worked properly, or enough for everyone on board or that fitted child passengers.

At Noosa alone, during the peak Australia Day period from 22 to 26 January our Maritime Enforcement Team (MET) conducted 101 vessel intercepts. They found 74 per cent were not compliant with safety equipment regulations, with lifejackets accounting for a quarter of these issues.

Forty-six per cent of random inspections during this period (that is, those not conducted on the basis of an observed non-compliance) found a non-compliance, with lifejacket rules accounting for over half of those.

‘It was concerning that even after we took an educative approach during December, there was still a high number of vessels having insufficient lifejackets, or lifejackets so poorly maintained there was no way they would provide buoyancy if they were needed,’ MET Manager, Rex said.

In one particularly alarming case, officers intercepted an unlicensed skipper on a personal watercraft who was carrying a very young child between herself and the steering wheel. While the skipper was wearing a lifejacket, the child was not.

In another case that showed a puzzling disregard for the safety of children, Rex intercepted a vessel with 3 children aboard and found 3 out of the 4 lifejackets aboard were so poorly maintained they were clearly unusable.

‘When I spoke with the owner of the vessel, even though he’d placed these lifejackets aboard the vessel and let his children head out for the day, his only focus was on why I had stopped them to check they had the required safety equipment,’ Rex said.

The message emerging from our summer boating safety focus on lifejackets was this: while most boaties are doing the right thing, there is a minority who are not and are leaving their safety—and that of their passengers—to chance.

Clearly there remains much to be done to get this cohort of boaties to understand that lifejackets are the seatbelts of the sea, and that if they’re not on they can’t save you.