The successful Marinas22 International Conference and Trade Exhibition concluded last night with the blue carpet rolled out for nearly 300 guests at the Gala Dinner sponsored by Gold Coast Waterways Authority.

The evening provided an opportunity for the industry to celebrate the achievements and recognise some of the industry’s long-serving members. 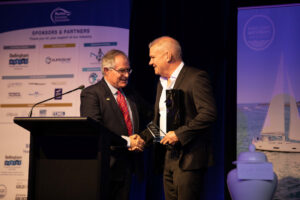 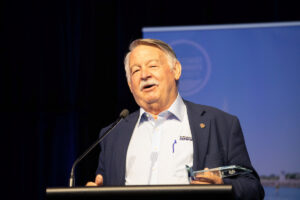 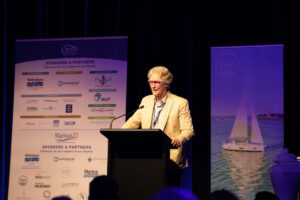 Andrew Chapman Marina Industries Association (MIA) President commenced proceedings recognising Colin Bransgrove for his service as CEO for 13 years. Having retired at the end of 2020, attempts to celebrate Colin’s contributions had been thwarted by the pandemic until now.

Also recognised on the night was Phil McGowen CMM, Marina Manager at the Platinum 5 Gold Anchor Birkenhead Point Marina, who recently announced his retirement. For over 14 years Phil had been a committed volunteer and provided his knowledge, skill and time in the creation and delivery of many industry courses and had mentored dozens of aspiring marina professionals. “I am sitting tonight with friends I made when I did my first marina management course back in 2007, what great friends I have made. I have enjoyed being able to give back to an industry I love and being part of the review panel for Certified Members applications it is humbling to have been in that position”.

The MIA was pleased to award a further five Certified Marina Managers, who’s applications were scruitinised and then approved by the Global Marina Institute. All were presented with their pins and certificates.

The night also included the recognition of an outstanding marina for achieving excellence in facility management, presentation and customer service, when One15 Marina Sentosa Cove Singapore was awarded a Platinum 5 Gold Anchor accreditation.

The Gala Dinner concluded with the highest honour given by the industry, John Spragg, Vice-President MIA was awarded with the MIA Lifetime Achievement Award.

The MIA Lifetime Achievement Award recognises individuals who have been major contributors to the marina industry over an extended period of time and for a majority of their professional life.

Andrew Chapman commented “John has been a true believer of what the MIA stands for. During his tenure at Bellingham Marine, John ensured that the MIA had the seed capital to operate while it was merely a volunteer organisation, through to today as the association’s Platinum Sponsor. Without John’s or Bellingham’s involvement the MIA would not be the strong association it is today.”

The awarding of the MIA Lifetime Achievement Award was a fitting conclusion to what was one of the largest Marinas conferences. The MIA looks forward to uniting the industry again at Marinas24