The 2022 Beneteau Pittwater Cup was a real celebration for all. One set of problems around the world have been replaced by another, and so the enthusiasm stemming from the chance to relax and simply go for a sail was as distinct as it was noticeable. Even Huey, that mischievous God of the Wind, felt inspired. He parted the gloomy and wet clouds that have been such a feature of recent months, and delivered a healthy 10 to 12 knots by early afternoon. Mind you, you did have to work for that pleasure, as the shifty conditions Pittwater is so famous for were ever present, especially in the Southern extremities of this most glorious of locations. 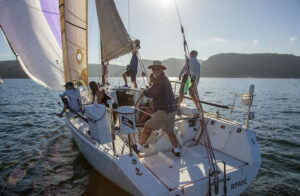 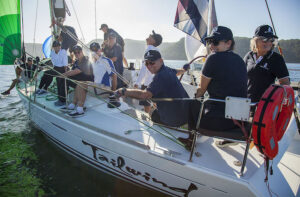 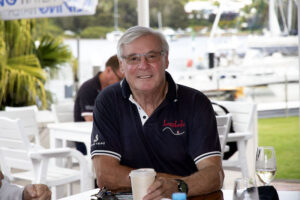 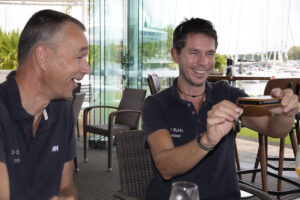 Graham Raspass from Flagstaff Marine, the NSW Beneteau agent summed it up eloquently. “It was fantastic that we could all get out on the water, and have so many owners and crews join us for our annual Pittwater Regatta.”

“As we rounded Lion Island and saw all the Beneteaus out there, it reminded us of how fortunate we all are to have such lovely waterways to sail on.”

Well there certainly were a lot of Beneteaus, and they represent the far and wide nature of the powerhouse brand’s offering. Boats old and new, like Bob Swan’s First 305 from the 80s, Elusive Spirit, and Lee Hawksley’s two-week-old Oceanis 40.1, Boomerang. Then there were small like Josh Patterson’s First 235, Mini Bateau, and large as represented by the Oceanis 51.1, Wilde Rush.

Certainly from the onset at the host, Royal Prince Alfred Yacht Club, there was a distinct joie de vivre as coffee gave way to Champagne and orange juice, as well as some hearty cooked breakfasts. 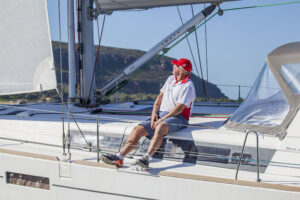 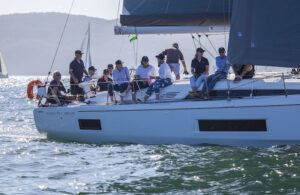 The talk moved swiftly past wet weather to the potential to actually race, and whether 2022 would mark another year when the entire fleet made it around Lion Island at the top of Broken Bay. It’s a fair discussion, for on average this rarity occurs around every five years. Inevitably, the conversations got to boats of then, now, and yet to arrive. The latter subject was certainly punctuated by firstly the new First 36, which has really shown her off wind capabilities during initial testing in Europe. One will be here in Australia in time for the Sydney Boat Show, with a caveat attached concerning global logistics.

Yet the one that has garnered a lot of attention is the new First 44, with impressive credentials, cabin top, primary and main winches adorning the deck plan, water ballast, and the ability to carry a 190m2 A-bag when you opt in for the taller carbon mast. Hello. I think we know exactly what Gianguido Girotti’s product team is trying to tell us with that particular specification. Turn the corner and whooshka…

With the all-important briefing completed, it was time to head to the boats, complete the preparations, and head for the start line and the 21st running of this popular event. It was actually created 22 years ago, but one was lost during the pandemic. Flagstaff team member, Shane Crookshanks staged the very first event, and has done all of them since. His enthusiasm for the regatta is as strong now as then. He was also happy to share his wisdom of racing in Shiftwater, as it can be referred to during the cooler months, and on the day advised all that after starting in the centre the right hand side of the track would pay – and it did for those that applied the theory. 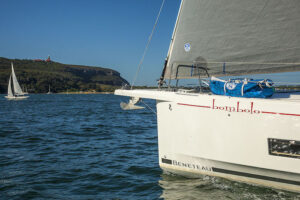 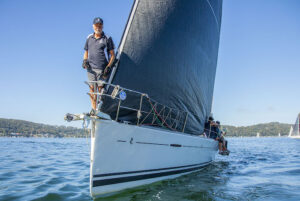 The sun came out, got stronger, as too the breeze, which would have been around three knots at the club, but showed signs of increasing just a bit further up Pittwater, and would be 10-12 knots across Broken Bay. That was definitely advantageous, for there was a massive incoming tide taking it from 0.4m to 1.8m, and as a result the rolling swell was around 1.8m, with just a 30cm wavelet on top. As I said at the time, I would much rather have to wear a neck gaiter than wet weather gear, any day.

Now we enjoyed it all on our Lomac 660 tender that Matt had kindly loaned to us. Thank you very much… It’s a lovely, safe, stable, stylish, well-made and quick RIB, especially with the 200hp Suzuki that adorned the transom.

Winners? Well clearly that was everyone who was out there, but if you had to be specific, then the coveted Spinnaker Division went to Josh Patterson’s Mini Bateau, and the evergreen and effervescent Bob Swan and crew on Elusive Spirit took out Non-Spinnaker, and boy were they happy with their loot for their day’s work. 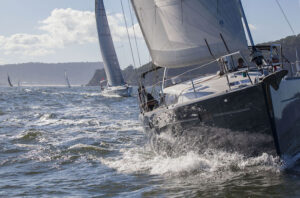 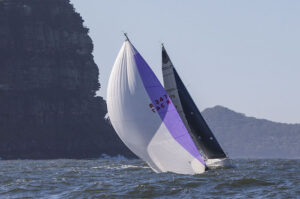 Special mentions to Scott Robertson and the crew on the First 40.7, Puff, who were first over the line back at Scotland Island where it had all begun at just after midday.

Also Robert Alpe and crew on the First 34.7, Gunner Goodwin, who punched above their weight all day, and came home in amongst much larger craft. They did an especially nice job of keeping their noses clean when at the last mark it went about five boats wide, the breeze totally crumped, and it was also time for a gybe with barely enough wind present to fill their kite, and many a much larger stick and sail plan around shadowing them ominously.

Finally Dean Dansfield’s Oceanis 41.1, whose Tactician for the day demonstrated that the English language and four paws were no impediment to getting the job done.

Then there were also the in-battles, like Matt Doyle’s Sense 50, La Troisieme Mi Temps (rough translation ‘The Third Half’ as a rugby reference) and Andreas Burgess’ Oceanis 45, Still Dangerous. On that particular day it would be the blue-hulled boat’s turn to reign supreme.

It will be Sydney Harbour’s turn for a Beneteau Cup regatta later in the year, with the date to be announced soon. No doubt that too will a chance to bring out the smiles. 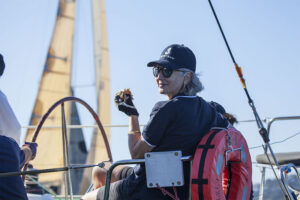 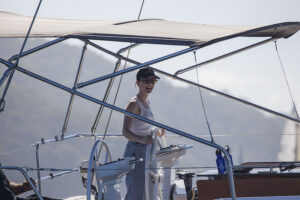 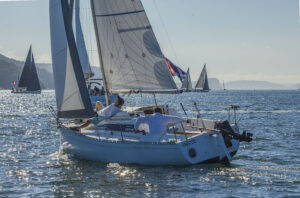 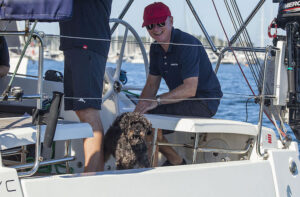 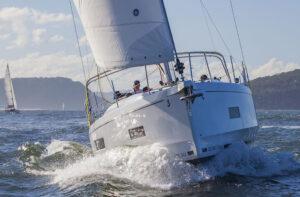 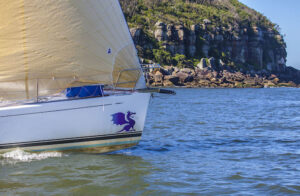 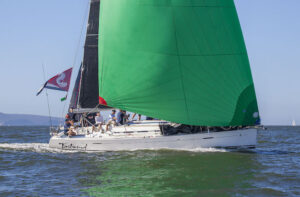 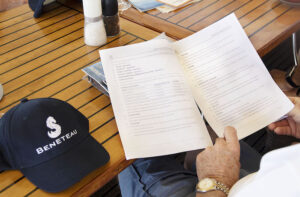