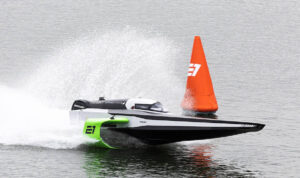 E1’s innovative electric foiling raceboat took flight for the first time on the River Po close to San Nazzaro in northern Italy, with the RaceBird prototype successfully completing a series of tests and performance runs with ex-powerboat champion Luca Ferrari behind the wheel.

The RaceBird engineers conducted a number of technical tests and systems checks to assess the overall performance and reliability of the boat and the various electrical components.

The testing schedule, which will continue for several weeks, will consist of straight-line tests, qualifying runs, and race simulations, with the focus on set-up and performance analysis and gathering data on the foiling and handling characteristics in different racing conditions.

The single pilot RaceBird vessel is the brainchild of Norwegian designer Sophi Horne and was co-created together with Brunello Acampora and the expert engineers at Victory Marine and SeaBird Technologies. The RaceBird is powered by a 150 kW Kreisel battery and an outboard motor produced by Mercury Racing, with the boat quickly lifting onto its foils with the benefit of instant torque and acceleration.

E1 organisers also used the opportunity during the test to evaluate different elements of the racing format, including trialling autonomous buoys and cornering profiles, as well as testing the positioning of onboard cameras to be used in the world feed broadcast.

The E1 world championship was founded by Alejandro Agag and Rodi Basso with a mission to build a new and exciting racing platform on the water, based on future electric technologies to protect and restore our urban waters and coastal areas.

The debut season of the E1 world championship is scheduled to get underway in Spring 2023. However, fans won’t have to wait long to see the RaceBird flying on the water, with the first public display set to be announced soon.

Alejandro Agag, Co-Founder & Chairman of E1, said: “Putting the RaceBird on the water for the first time is a pivotal moment for the E1 world championship. We’re now one step closer to making electric racing on the water a reality. I remember very well the same scenarios we encountered during the early stages at both Formula E and Extreme E, and just like on those occasions this is a major breakthrough on E1’s journey. Seeing the RaceBird fly proves to me that we can use this exciting, new sporting platform to drive technological innovation in the marine industry and create something spectacular for fans in the cities we visit.”

Rodi Basso, Co-Founder & CEO of E1, added: “Seeing the RaceBird flying on the water for the first time was an emotional moment for myself and many others who have been working on this project over the past few months. It’s been a huge team effort to get to this point and it wouldn’t have been possible without the help and support of our partners at Victory Marine and SeaBird Technologies. Special mentions should also go to Kreisel and Mercury Racing for their work on preparing the battery and outboard.

“So far, the RaceBird has exceeded expectations especially with the performance, agility and cornering capabilities. The current performance levels are exactly where we wanted them to be, helping to promote exciting foil-to-foil racing close to the shoreline. In the coming weeks, we’ll continue to run further tests and gather the necessary data. I’m really looking forward to showing it in public for the first time, which we’ll be announcing more on shortly. This test marks the first page of a new chapter in the electrification of the marine industry, focusing on accelerating future technologies for the benefit of our waters.”

Sophi Horne, RaceBird designer & Founder of SeaBird Technologies, said: “I’ve been waiting for this moment for almost three years! To finally get to this point is a huge sigh of relief but I’m also very proud of what we’ve managed to achieve with the combined efforts of SeaBird and Victory Marine. Watching the boat being lowered into the water and drive off… that will stay with me for a long time.

“It’s been so amazing to watch my design develop into a fully operational raceboat. We still have some work to do, but for the first round of tests, we really couldn’t have asked for more. With the RaceBird, I wanted to create something unique that stood out from the crowd and got heads turning from an aesthetic standpoint. Seeing it now in motion gliding on the water, I think we’ve managed to achieve that.”