The calm lagoon that lies south-west of Double Island Point is an iconic feature of the Cooloola area. 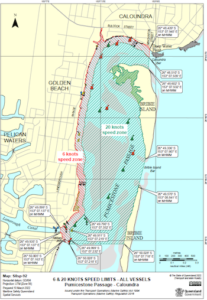 The lagoon is an appealing tourist destination that attracts many families for recreational pursuits including swimming and use of passive craft. It is also used by moored craft.

In recent times, it has also been increasingly visited by faster powered vessels such as personal watercraft (jet skis) and speed boats. Since no speed limits applied in the area, some skippers of faster powered vessels were operating at speeds that raised safety concerns among other groups using the waters.

Having been made aware of these concerns, MSQ and its enforcement partners investigated and determined the concerns were well-founded. The agencies collaborated to develop a proposal to introduce a 6 knots speed limit for the lagoon that MSQ took to public consultation over December 2021 and January 2022.

The proposal received overwhelming support from stakeholders, so in the interest of improving safety for all lagoon users, the 6 knots speed limit was gazetted on 4 February 2022.

Meanwhile, further down the coast, new speed limits have been set in the waters from Golden Beach to Bulcock Beach in Caloundra, a small section of the 35km channel known as Pumicestone Passage.

The passage is a peaceful stretch of calm water, made up of a system of tidal channels and sandbanks protected from the ocean by Bribie Island. The popular spot is commonly accessed by families and children, swimmers, users of passive craft and powered vessels.

With the waterway becoming more popular and congested, MSQ consulted over a proposal to reduce the speed limit in this area from 40 knots to 20 knots to ensure safe interactions between its diverse users.

While a 6 knots zone had applied within 100m of the shore between Military Jetty and Bulcock Beach, the remainder could be traversed at speeds up to 40 knots despite being a narrow and shallow waterway.

Strong support for the proposal was shown during public consultation, indicating stakeholders felt the speed limits needed to be reduced in the interest of safety for all.