With less than 24 hours until the doors open, the team at Sanctuary Cove have declared that new product releases will be prominent at this year’s event.

From racy runabouts to luxury liners, the Sanctuary Cove International Boat Show (SCIBS) shores up its status as the hottest ticket in town when the 33rd annual event anchors at Sanctuary Cove on the Gold Coast from 19 to 22 May 2022.

The keenly anticipated four-day event is a welcome boon for the Gold Coast region and across the event, tourism and boating industries. The Show attracts boat lovers and buyers from across the country, fuelling sales, generating jobs, stimulating the tourism sector and increasing visitor nights throughout the region.

After a record-breaking show in 2021, SCIBS 2022 will stage one of its biggest Boat Shows to date with 337 exhibitors showcasing more than 600 vessels and 1,000 products including a showstopping lineup of world and Australian premieres and brand-new launches from luxury superyachts, trailerable boats and personal watercraft to the latest marine gadgets and must-have technology.

Leading Australian luxury motor yacht manufacturer Maritimo will debut three new models as part of a fleet of six vessels on water, which Lead Designer Tom Barry-Cotter said heralds one of the brand’s most anticipated displays at SCIBS in recent years. 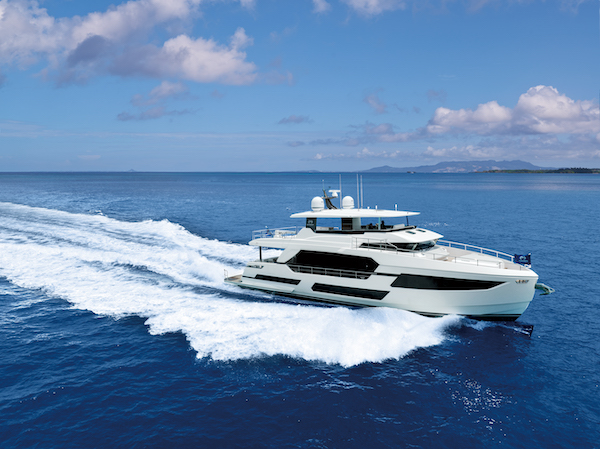 “Horizon will be showcasing our brand-new FD75 Open flybridge, the cutting-edge FD80 Skyline with all the amenities of a mega yacht, which is available for immediate delivery, and the most popular FD Series model, the FD90 Skyline,” Horizon Director Mark Western said.

“We will also reveal two Integrity PLUS ranges, the SX PLUS and CE Plus, or Coastal Express, which are built on an entirely new hull and provide the option of a faster pace.”

Eyachts will display the Australian debut of the Axopar 22 range, as part of a fleet of seven vessels from Axopar, BRABUS Marine and Pardo Yachts, in what Founder Peter Hrones said will be Eyachts’ biggest stand ever.

“Many Australians already love Axopar, and SCIBS is a great opportunity to see the range of award-winning day boats, including a first look at the new Axopar 22 range of sleek European trailerable boats,” Mr Hrones said. 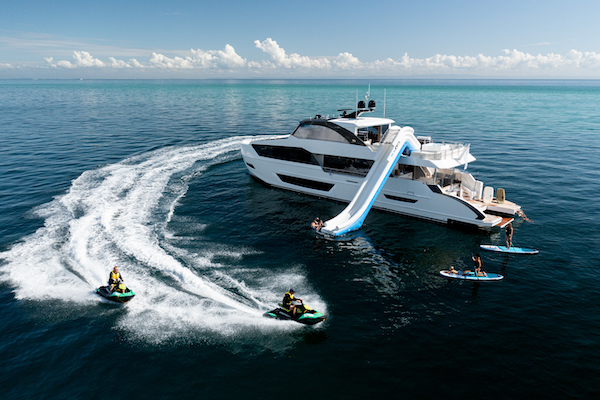 Cresting the wave of all-time high demand for its top-selling yachts, Alexander Marine Australia yacht dealership is thrilled to share the global launch of the Ocean Alexander 28 Explorer luxury motor yacht at SCIBS 2022.

“We will showcase the world debut of the Ocean Alexander 28 in the Explorer Series alongside the recent Galeon 500 Fly and Galeon 510 Skydeck models and look forward to greeting our interstate and international buyers,” Alexander Marine Australia Dealer Principal/Director Todd Holzapfel said.

One Brokerage is the exclusive Australian boat dealership for Fairline Yachts UK and US-based Regulator Marine and will have two new models on display at this year’s event.
“SCIBS 2022 will be the Australian boat show premiere of the award-winning Fairline 65 Targa GTO, a sleek sports yacht with Italian design DNA and British style, and the Regulator 41 powerful sportsfisher with outstanding quad Yamaha 425 motors,” One Brokerage Director Evan Moore said.

In the luxury superyacht category, show-goers will also be able to peruse the Australian premieres of the Riviera 4600 Sport Yacht Platinum Edition and exceptional new 78 Motor Yacht alongside a third launch to be exclusively unveiled at SCIBS 2022.

The three premieres are part of Riviera’s largest-ever showcase of 12 luxury motor yachts.
Florida-based Leopard Catamarans will be in attendance for the exclusive Australian launch of its L53 Power Catamaran and new L42 and L45 Sailing Catamarans alongside the Italian-designed Dufour 48 Catamaran showcased by Performance Cruising Yachts.

Princess Yachts Australia will have a world premiere on water with its award-winning, upgraded F Class 55 Flybridge Yacht, while Fleming Yachts will debut the all-new Fleming 58, which floats an entirely new design for the ultimate cruising yacht.

Trailerable boats and personal watercraft will have a strong presence at SCIBS 2022 with a whopping 25,000m2 of showcase space to meet consumer demand for recreational boating.
The official launch of new luxury Australian brand nsea Boats is sure to make waves at SCIBS 2022 as the first boat builder in the world to implement nauti-craft’s patented marine suspension technology.

BLA, the boating, lifestyle and adventure experts, will introduce the brand-new BLA Formosa and PowerCat boats with new products and technical features in the Sea Trials area alongside the Australian-first showing of the Sea Fox 328 Commander, the 2022 Sea-Doo Fish Pro range and 12 new colourways of the SEABOB lineup from JSW Powersports.
Australian Marine Centre (AMC) Boats will highlight the Australian release of the Invincible 33ft Catamaran, while John Crawford Marine and Arvor Boats Australia will have the new-to-Australia Arvor 625 Sportfish and 675 Weekender to reel in avid anglers.

SCIBS 2022 will also have a raft of new-release gear and gadgets that are sure to float your boat within The Pavilions presented by Stella.

SCIBS 2022 will also mark a momentous milestone with major partner Bentley Brisbane & Gold Coast, celebrating a decade-long association with the Show with the display of four custom cars specially commissioned for the occasion.

Attendees will be able to view the exclusive curated collection of a Bentayga, Flying Spur, Continental GT and Continental GT Convertible by Mulliner, which have been inspired by the luxurious marine lifestyle.

Free Park ’n’ Ride services will be operating from Warner Bros. Movie World and Dreamworld, using a fleet of air-conditioned coaches, and there is also limited onsite parking at Sanctuary Cove, available to pre-purchase online with tickets.

The 33rd Sanctuary Cove International Boat Show (SCIBS) is on from 19 – 22 May 2022. Tickets are on sale now via sanctuarycoveboatshow.com.au/tickets

How Maritimo’s Isaac Marshall has salt water in his veins