Marinas22 Wrap up: The Best Yet

Marinas22 International Conference and Trade Exhibition reaffirmed its place as one of the largest marina industry conferences in the world after welcoming over 320 attendees across the two days on the Gold Coast last week.

The program brought together a fantastic line up of speakers that inspired delegates to capitalise on the strength of the industry through its relevant and thought-provoking content. 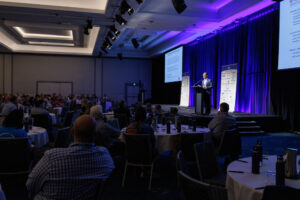 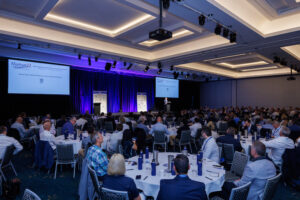 The conference was opened by the Hon. Michael Healy, Queensland Assistant Minister for Tourism Industry Development, a strong supporter of the industry who highlighted the measures in place for future sector growth. An economic overview, forecast and implications for industry was delivered by Tapas Strickland, NAB Chief Markets Economist, before Ashley Fell, Demographer and Social Researcher and Director of Advisory at McCrindle Research outlined the changing consumer and demographic trends and the opportunities ahead for the marina industry.

Andrew Chapman, MIA President released the findings of the 2021 Health of the Australian Marina Industry Survey (HAMIS) which presents a resilient and strengthened industry but challenges operators and governments to provide additional storage capacity to support the boating boom.

Making the trip from the United States, investor, entrepreneur and President and owner of Bellingham Marine Industries, Joe Ueberroth provided a thought-provoking presentation on how marinas could maximise their returns, the conference hall was buzzing with many in the room re-evaluating their current business practices and taking on board some of the ideas presented.

With the macro picture painted and the industry opportunities examined, the afternoon presented delegates with a choice of specialist subjects to examine. Conference Committee Chairman Mike Harvey commented “The Marinas22 program was designed to allow delegates the opportunity to delve into topics by choosing between two workshop streams, each with a panel of experts. Day one included innovation, the environment and decarbonisation, boatyard evolution, marketing and marina events.” 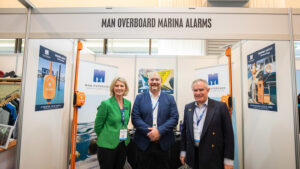 The Innovation Showcase was the highlight and showcased five new products, four of which were environmental initiatives. A live poll was taken from over 150 delegates in attendance, with the Man Overboard Marina Alarm System being announced as the winner in a tightly contested result. In receiving his award, product creator Paul Williams explained the genesis of his idea, “It was conceived after a near drowning incident in a marina where my boat is moored.

A woman had fallen into the marina late at night, by the time her cries for help were heard she was suffering serious hypothermia as well as other injuries. I went home that night and came up with a solution that has consumed my life ever since.”

Day two of the conference focussed on encouraging delegates to look internally at their operations to further capitalise on the recent industry growth. This was led by Darren Vaux, Vice President of ICOMIA and the Managing Director of the Empire Marinas Group, who provided delegates with insights and discussed opportunities on how the industry could engage with new and old boaters as we move into a post COVID environment.

Suzanne Davies MIA CEO provided an overview of the MIA, how it is supporting industry and the Association’s strategic direction. Davies then introduced Ed Shute Membership and Programs Manager, who explained the importance of the environmental and accreditation programs the MIA administers along with the industry training and educational programs. New industry support initiatives including My Marina Guide and Marine Jobs were also presented. In closing, Shute commented, “It is our business, to help members grow theirs”, a sentiment embraced by the room.

The day closed with the North Harbour Happy Hour and a facilitated networking session amongst the exhibitors. All delegates remained until the end, when lucky door prizes saw one delegate walk away with a bottle of Grange and another with a bottle of Dom Perignon. Cheers to North Harbour!

Day two workshops delved into topics and key pain points such as insuring against and managing risk, legal issues facing marinas and creating an engaged, productive and high performing workforce through training and development.

During the ‘Lessons and Learnings’ session, Scott Finsten, Harbour Master, Ocean Marina Yacht Club in Thailand provided vision of a recent boat fire at his facility, explaining to delegates the key takeaways and best practices that need to be in place to avoid disaster. Panel chair Andrew Chapman commented “It’s these firsthand experiences that help build knowledge amongst the industry and in the long run will reduce the number of catastrophic accidents occurring”.

Lorraine Yates, General Manager of Sydney Harbour Boat Storage commented, “It was so great to see the industry sharing ideas, reconnecting and reuniting long friendships after a three-year gap between Marinas conferences. It was an inspiring and thought-provoking event.”

Jonathan invigorated the room to embrace innovation. Suzanne Davies commented “Jonathan gave our marinas a lot to think about, changing their mindset of the business they think they are in and shifting this to the business they are truly in. When we selected Jonathan to be our keynote speaker, we were drawn to his ability to invoke deeper thinking and inspire an audience to challenge the status quo.”

Marinas22 concluded with the ‘blue carpet’ being rolled out for the Gala Dinner sponsored by Gold Coast Waterways Authority. The evening provided an opportunity for the industry to celebrate the achievements and recognise some of the industry’s long-serving members.

Recognised on the night was Colin Bransgrove for his 13 years’ service as MIA CEO and Phil McGowen CMM, Marina Manager of the Platinum 5 Gold Anchor Birkenhead Point Marina, for over 14 years of service volunteering and providing his knowledge, skill and time in the creation and delivery of many industry courses and the mentorship of aspiring industry professionals.

The MIA was pleased to award a further five Certified Marina Managers, who’s applications were scrutinised and then approved by the Global Marina Institute. All were presented with their pins and certificates 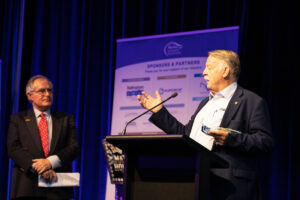 The Gala Dinner concluded with the highest honour given by the industry, John Spragg, Vice-President MIA was awarded with the MIA Lifetime Achievement Award. Only three have ever been awarded. The MIA Lifetime Achievement Award recognises individuals who have been major contributors to the marina industry over an extended period of time and for a majority of their professional life.

Andrew Chapman commented, “John has been a true believer of what the MIA stands for.

During his tenure at Bellingham Marine, John ensured that the MIA had the seed capital to operate while it was merely a volunteer organisation, through to today as the association’s Platinum Sponsor. Without John’s or Bellingham’s involvement the MIA would not be the strong association it is today.” 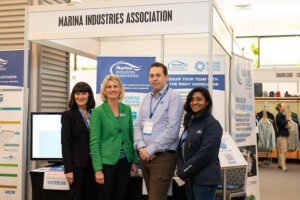 The awarding of the MIA Lifetime Achievement Award was a fitting conclusion to what was one of the largest Marinas conferences.

The MIA thanked all delegates, speakers, exhibitors and sponsors who contributed to Marinas22 being the biggest and best event yet. The MIA looks forward to uniting the industry again at Marinas24.