The City of Rockingham’s upgrades to the spur groyne and breakwater at the Point Peron Boat Launching Facility are complete.

Delivered at a cost of $1.3 million, the project involved the demolition of the old existing spur groyne and breakwater, which were originally constructed in the 1970s. 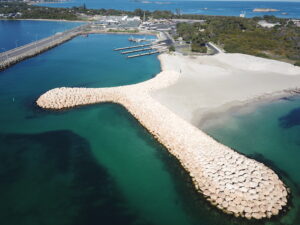 An upgraded spur groyne that is 20 m longer than its predecessor has been built in its place, along with an upgraded breakwater. The project will ultimately provide safer conditions for people launching and retrieving their vessels at the Point Peron Boat Launching Facility by protecting the boat ramp from waves, as well as limiting the build-up of sand in the Point Peron boat harbour. Furthermore, the delivery of the project will also play a role in limiting erosion to beaches in the area.

To assist with the delivery of the upgraded spur groyne and breakwater the City secured a $650,000 grant from the Department of Transport (DoT).

“The Point Peron Boat Launching Facility is the most popular boating facility in the City and enjoyed by boaties year round, and the delivery of a new spur groyne and breakwater means skippers will be able to launch and retrieve their vessels in safer conditions for many years to come,” Mayor Hamblin said.

“The latest works at the Point Peron Boat Launching Facility have been guided by the City’s Coastal Facilities Strategy and follow on from several other upgrades in recent years.

“These include the addition of two new concrete boat ramps, upgrades to the existing rock revetment wall, construction of new reversing bays, and an extension to the existing car park.

“The City also gratefully acknowledges the funding contribution provided by DoT to this project.”