In the United States, New Zealander Bruce Farr has been inducted into their National Sailing Hall of Fame (NSHOF), where he was announced as part of thirteen sailors comprising its 12th class of inductees. The Class of 2022 includes:

“This year’s inductees exemplify innovation, virtuous competition and are exceptional sources of inspiration for the young and old in the sport of sailing,” said Gus Carlson, president of the National Sailing Hall of Fame. “We are proud to honour their accomplishments and welcome them into the Hall of Fame.”

The members of the Class of 2022 join 101 current National Sailing Hall of Famers, all of whom are featured in the Legends of Sailing exhibition at The Sailing Museum, which recently opened in Newport, R.I. An interactive experience will share their photos, career highlights and quotes from the legends themselves. The newest members of the Hall of Fame will be honoured in the museum later this year. 2022 marks the twelfth year of annual induction to the National Sailing Hall of Fame. For more on the inductees, please visit: nshof.org/hall-of-fame.

The Class of 2022 will be formally celebrated in November with an Induction Ceremony and Dinner in Newport, R.I. A welcome reception will be held Friday, November 4th at The Sailing Museum which is housed in the former site of the international press corps during the 12 Metre America’s Cup era in Newport. The ceremony and dinner will be held at the neighbouring International Tennis Hall of Fame on Saturday, November 5th. The Induction Weekend has become notable as a reunion of sailing’s Who’s Who as previous inductees join the celebrations to welcome their peers into the Hall of Fame. More details about the events, sponsors and attendees will be shared soon.

The inductees were nominated by sailors from across the United States. Nominations were reviewed by a Selection Committee comprised of representatives from the NSHOF Board, previous inductees, the sailing media, the sailing industry, community sailing, a maritime museum, the cruising community and US Sailing. Nominations are accepted year-round at nshof.org/nominations. The deadline for Class of 2023 nominees is January 31.

Nominees must be American citizens, 55 years of age or older, who have made a sustained and significant impact on the growth and development of the sport in the United States at a national or international level in the following categories: 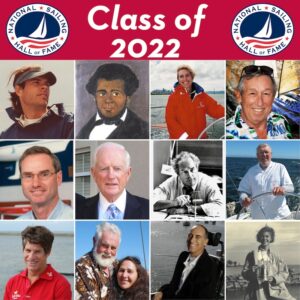