The first thing Neville Wittey does when he climbs aboard an unfamiliar boat is ask: “where are the lifejackets and where is the EPIRB?”

It’s not that Neville’s a nervous, newbie boater. Quite the opposite, he’s a former Olympic sailor who has steered for Australia in America’s Cup challenges and several Sydney-Hobart yacht races. 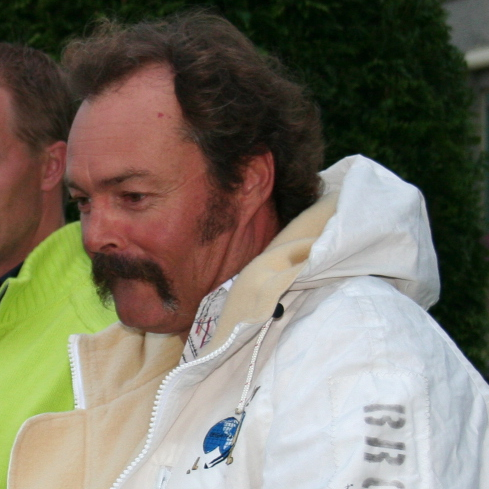 About two years ago, Neville had organised a crew to help sail his 55 foot Benetau from Sydney to the Whitsundays and was sound asleep below deck at night when the boat grounded on a sandbar near Port Macquarie.

“I was sound asleep with the dog in a headlock, as happy as a clam, when I woke up getting slammed against the bulkhead – luckily

feet first – thinking ‘this is a dream’,” Neville remembers.

“The boat was listing at 50 or 60 degrees and floorboards were missing from the impact.

“Preparations for our trip were first class, so to wake up in absolute turmoil was a terrifying thing.

“Where it got really bad for me was realising three people were overboard, I can’t describe it. I’ve been sailing my whole life with lots of good people and to have that happen was a nightmare.

“Even though I wasn’t the watch captain at the time because I was asleep it was the worst moment of my life.

“I battled my way upstairs but could see nobody and hear nothing because of the pounding of the surf. Imagine losing three friends?”

It was 40 minutes before all on board were accounted for. Another of the crew remained on board but had suffered a serious back injury from the impact. All three who had been on deck had fallen overboard when the boat first struck a sandbar 350 metres offshore. One crew member had to battle his way back to shore after being taken out to sea in a rip.

“I would hate to think what would have happened if everyone hadn’t been wearing lifejackets as they wouldn’t have had time to get them on. It’s exactly why there’s a rule that after sunset lifejackets must be worn.

“The worst part was a dear friend of mine had hurt his back in the incident. When something like this happens, all you care about is the people.”

Knowing he had to alert the authorities, Neville stumbled about in the dark avoiding the obstacles on the listing boat until he found the grab bag which contained handheld radios and a knife, torches, spare battery pack and mobile phone charger, some snacks, glow sticks and ink dye to mark a location in the ocean.

“Fortunately the grab bag was exactly where it should have been, which was a great relief. Every time I hop on a boat now I say ‘where is the EPIRB?’” he said.

“In so many cases an EPIRB would be difficult to reach and deploy. The EPIRB should always be in an easily accessible position inside the companion way.

“Once I fired the EPIRB and made the mayday call, I turned on all of the lights to make it easy to spot us and turned off the gas into the cabin.

“It was a very dark night with low clouds and little rain squalls – we were on such an angle that I couldn’t stand up to see the plotter to give our coordinates.”

“I got all the crews gear bags off and a couple of bags of water and food off and we managed to get the injured man off and up on to the beach.”

Before joining the rest of the crew on the beach, Neville went back below deck to locate his faithful black seafaring cavoodle.

“Salty has fallen between the deck and the boat before so he always wears a lifejacket when he’s on board. It has a handle along the back, so I picked him up like a suitcase,” Neville said.

“After that, Salty was glued to me. He was traumatised, although thankfully it wasn’t a lasting thing and he has been on many boats since.”

Neville is eternally grateful to his rescuers who arrived by land and helicopter.

“As far as I was concerned, I was lost at sea and entirely relying on these people to help me through this crisis and they were all stunning,” he said.

“We have made sure to donate to the various volunteer associations to assist them. Everyone was so thorough and caring, I thought it was magnificent.”

Neville said despite being well prepared with all the safety equipment required under NSW law, he had since also added foil blankets to his collection.

“It was incredibly cold sitting on that dark beach at the end of June.

“The bottom line is that while you may never think something like this can happen to you, it can and it might. I just don’t want anyone else to go through something similar and to not be prepared.

“Please don’t ever underestimate the importance of carrying and knowing how to use all the required safety equipment each time you go boating.”