How a love of sailing helped Einstein explain the universe

If the world’s most famous physicist Albert Einstein is any guide, modern-day scientists need to get out of the lab more and onto the water.

Around 1900, a cheeky Swiss patent clerk wrote to a friend about four scientific papers he had been working on in his spare time. He described them as revolutionary, claiming they would one day modify the “theory of space and time”.

The then 18-year-old had just learnt to sail but maybe physics wasn’t the only thing on the mind of the budding genius when he regularly ventured out onto the Alpine lakes of Switzerland. His crew was the daughter of his landlady Suzanne Markwalder. According to Markwalder, when the breeze dropped and the sails sagged, Einstein would whip out his notebook and begin scribbling away.

“But as soon as there was a breath of wind,” she said, “he was ready to start sailing again.”

The pair became lifelong friends after bonding on their sailing trips. 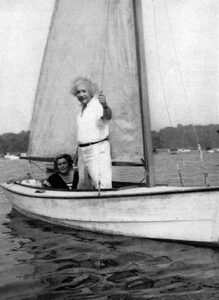 Albert Einstein had a boat called ‘Tinef,’ which is a Yiddish word approximating “little piece of junk.” He used to sail it at New York’s Nassau Point, where locals remember him being a terrible sailor. Image and caption courtesy of @NatGeoGenius.

Suzanne’s observation sheds light on how “Young Einstein the sailor” first cracked the laws of physics in 1905. His first three articles relied on a stationary observer. He’d obviously figured out the concepts of space and time while becalmed on a lake.

It took 10 more years of sailing to figure out the hard physics bit — what happens when velocity and relativity are constantly changing — or put simply, when the breeze comes up.

On the November 25, 1915, he officially published the gravitational field equations of general relativity, the so-called Einstein equations.

Maybe the water and sunshine cleared his head. Either way, his sailing technique was unusual to say the least — in his words: “set sail, make it fast, no thoughts of energy or velocity, loll back, let boat drift.”

Einstein the sailor was not interested in racing and fell into the “cruising” category. He hated engines and is even said to have refused a present of an outboard motor. On a boat, he said he was oblivious to everything else in the world – which might explain why his navigational skills were so poor.

In 1929 his love of sailing inspired some rich friends to present him with a very cool German-designed coastal cruiser called Tummler (porpoise), although he referred to her as his “thick little yacht”.

He was pretty rapt with his new boat, writing to the ship builders:

“The sailing boat has my highest respect and also the respect of all the people who have been sailing with it. It combines a high degree of stability with a relatively high mobility and comfort for the operation.”

But his joy didn’t last long as the Nazis seized the boat in 1933 when Einstein fled to America.

He tried hard to get her back but a rescue operation was deemed too dangerous and Tummler was lost.

Not so smooth sailing 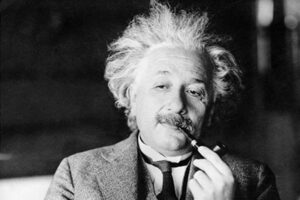 In his new home in the United States, Albert Einstein was always on the lookout for places to sail.

Rhode Island’s heavy fog didn’t faze him and he was rescued several times after running aground. He was invited to stay overnight in the White House that year to chat to another sailing tragic Franklin D. Roosevelt.

His grasp of the laws of physics however turned more to chaos theory on the water.

In his late 50s while sailing in a remote spot off Long Island on his clunky little sailboat Tinef (which apparently meant “worthless” or “junk”), he was frequently dismasted, ran aground and nearly drowned when he hit a rock and the boat capsized, trapping him under the sail.

According to a friend that sailed with him, Einstein “loved it when the sea was calm and quiet, and he could sit in Tinef thinking or listening to the gentle waves endlessly lapping against the side of the boat”.

The laws of physics are more obvious in a constantly changing sea and Albert Einstein knew just where to look: “Nature conceals her secrets because she is sublime, not because she is a trickster.” 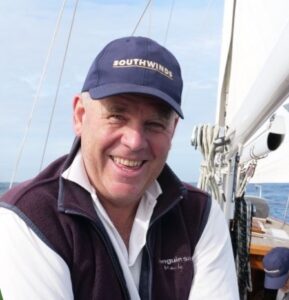 Michael Troy will be known to many, as a Senior Reporter / Producer for the Australian Broadcasting Corporation (ABC).

You can connect with Michael through LinkedIn.

Resources for Boaters who are Deaf or Hard of Hearing