Olympic treat for young Geelong sailors at Festival of Sails

Geelong’s youngest sailors were treated to a rare opportunity to sit down with one of Australia’s finest sailors today when they were joined for breakfast by Olympic sailing silver-medallist Lisa Darmanin.

A dual Olympian at Rio in 2016 and then Tokyo in 2020 and world championship competitor, Lisa is an ambassador and special commentator at the Festival of Sails and spent some time with the enthusiastic local youngsters to share insights about her Olympic journey and what it takes to compete on the world stage.

Winning the title of Australian Sailing Female Sailor of the Year no less than four times, Lisa has a wealth of experience that the young audience was keen to tap into and she shared the highs of winning the silver medal in Rio and then her disappointment at the fifth-place performance in Tokyo.

“Dealing with the occasional disappointment is all part of the game, but it’s about focussing on did I give it my best shot, and did I try hard enough, and the answer was yes,” she told the young sailors. 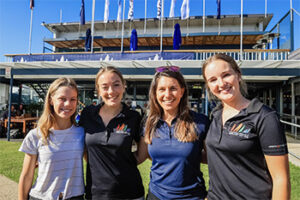 “We all need to remember that it’s not always necessarily going to go the way we want, but we keep going.”

The group was keen to hear from Lisa about everything from competition nerves, her training regime and diet, the steps to Olympic selection and dealing with challenges. For local sailor, 11-year-old Matilda Groves from Waurn Ponds who has been sailing since she was seven, the chance to meet her sailing hero was really exciting.

“She was so inspiring and really lovely to talk to,” she said.

Matilda is just one of the young sailors who’ll be racing on Australia Day in the Sixth Fleet International Cadet Sprint Series in Geelong.

“It was great to connect with the youth sailors at Royal Geelong Yacht Club. They’re a super keen bunch and were excited to hear about some of the Olympic journey,” said Lisa Darmanin.

“Looking around at the kids of all ages, it really feels like sailing in Geelong has a great future.”

Festival of Sails starts countdown for 180th event in 2023!