Marine Rescue Port Stephens Coxswain Laurie Nolan received the Star of Courage in recognition of his conspicuous courage in the face of great peril as the crew of rescue vessel Port Stephens 40 battled 50 knot winds and 5-6m seas to save disabled racing yacht M3.

Fourteen other members of the unit received national Bravery Medals for their service to the community in the M3 mission and a series of other operations in wild conditions on January 6 and 7, 2016, including responding to five Maydays and searching for a lost yachtsman. 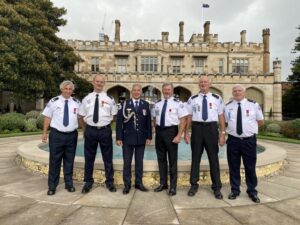 In all, total 22 Watch and Crew members from Marine Rescue Port Stephens received various Marine Rescue awards for their efforts, with 7 awards of a Commissioner’s Citation for those members in the Radio Room during the operation; 14 awards of a Commissioner’s Commendation for Courage for Boat Crew involved in the numerous sorties over the two days and the award of the Medal for Valour to Laurie Nolan.

Marine Rescue New South Wales extends their sincere congratulations to all of these wonderful volunteers.

Project of passion for Pride