The Western Australian Government has this week announced a $2.3 million navigation upgrade at Rottnest Island to increase safety. This includes improvements at Thomson, Rocky and Geordie bays, Monday Rock and Duck Rock.

Implementation will start in October in preparation for summer next year. Detailed design work is underway for the $2.3 million design and construct contract to replace key navigation aids at Rottnest Island, improving the safety of those visiting by boat.

A total of 11 navigation aids will be replaced at key locations, including:

Work will be undertaken by Maritime Constructions Pty Ltd, which has previously completed navigation aid replacement and installation works for ports in South Australia and the Northern Territory, in addition to undertaking major upgrades in WA’s north-west. 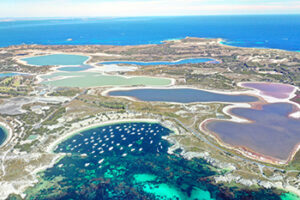 The replacement will commence in October outside of the busy school holiday period following detailed design which will be based on modelling metocean conditions of the specific bays at Rottnest and analysis of historical information.

Some further comments about the project, seen below, are attributed to Transport Minister Rita Saffioti:

“Rottnest Island is a WA tourism icon and is surrounded by an amazing marine playground.

“This is an important and timely navigational safety project that will provide benefits to the island’s visitors whether they are arriving on a commercial ferry or their own recreational craft.”

“The Department of Transport is working closely with the Rottnest Island Authority to implement the project which during the planning, design and implementation phases will create and support local jobs.”

“It’s anticipated the work will be completed late this year in time for another busy summer at Rottnest having delivered jobs, a boost to the economy and lasting benefits for the community.”