New Dockmaster on deck at Rivergate

For Sarah Toxward, a job at Rivergate Marina and Shipyard was always on her radar – so when she saw the dockmaster position advertised, she jumped at the chance.

With world-class experience and the attitude to match it, Sarah Toxward has dived into her new role as Rivergate’s Dockmaster with determination and grit.

Sarah’s career within the marine industry has been exciting and diverse to say the least. Some of her previous roles include scuba diving instructing in Cairns, being a First Mate on superyachts in the Caribbean, training students to become superyacht deckhands and most recently, being a Marina Officer at the Cairns Marlin Marina.

However, it’s a job at Rivergate that’s always been on her radar. 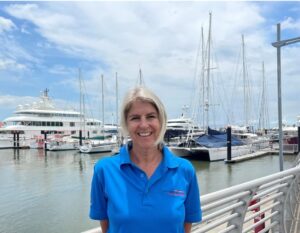 “I’ve always wanted to work for Rivergate because I believe it’s the premier place in Australia for superyachts,” says Sarah. “When this job came up, I felt like it was meant to be.” Rivergate’s $200 million expansion also piqued Sarah’s interest – and she says she’s excited to be part of the growth that’s to come as a result.

“Being an ex-yacht crew member and seeing firsthand how much money superyachts bring to Australia and the local economy has highlighted to me how much we need them to come here,” she says. “People need to start seeing the flow-on effects from visiting superyachts.”

Working within a male-dominated industry has never phased Sarah. Her previous role at Cairns Marlin Marina saw her dealing with anything from superyachts to prawn trawlers and fertiliser ships, where the berthing of 250m commercial ships was the norm. If anything, Sarah believes she thrives in these environments by letting her customer service and wealth of knowledge speak for itself.

“In my last year working in the port, I was the only female and I was assisting people who weren’t used to dealing with females and that was often challenging, but I loved it,” says Sarah. “I have a way of getting along with people who come from all walks of life. When I joined the yachting world back in 2006, they specifically wanted a female deckhand dive instructor, and yet you could look across the bows of the boats across the Mediterranean and only see males. When I left the yachting industry and even now in 2022, there are so many more females on deck. They’re in the engine rooms, they’re driving or doing other roles… it’s becoming more common now.”

While she’s still settling into her role at Rivergate, Sarah has a firm handle on what she wants to achieve during her tenure as the dockmaster.

“I want to be delivering the best customer service that I can, greeting people coming to Rivergate, whether it be yachties on boats or superyachts, and leaving them with a happy experience – regardless of whether they’re here for a holiday or work that they’re getting done,” she says.