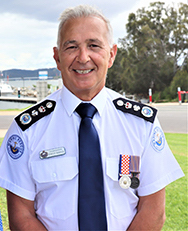 “Volunteers attending the unit come from both the Tuross and the Moruya communities”, Commissioner Tannos said.

“The unit also has vessels located in both communities, on Tuross Lake and the Moruya River at Preddys Wharf, so it makes good sense to better represent this dual presence in the unit’s name. ”

The current unit base and infrastructure was developed over time by local VRA volunteers, with the base officially opened in 1994.

Unit Commander Alan Blessington said that the name change would not affect the great service offered by the unit to the local boating community.

“Our unit undertakes rescues on the on the Tuross River, Tuross and Coila Lakes, the Moruya River and on the open sea from Broulee Island to Potato Point.”

“Our new name acknowledges the important role that the Moruya community plays in supporting our volunteers, and we will continue to offer 24/7 rescue assistance to both communities.”

“We’re always interested in hearing from local people who would like to become volunteers, and welcome anyone wanting to make a positive difference to the Tuross Moruya communities.”

Techniglue – The best in the bonding business

The fishy business of artificial reefs