What do the remains of an 1890s shipwreck and a timber pile from an old jetty have in common? 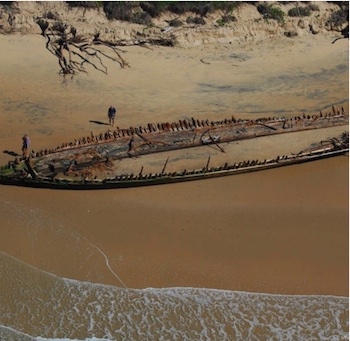 They are some of the maritime heritage of Woolgoolga that a new project aims to both protect and highlight through new signage and displays along the Woolgoolga foreshore.

Solitary Islands Marine Park Project Officer, David Greenhalgh, says the project came about in response to community concern that the remains of Buster, a 19th century sailing ship that ran aground in 1893, were at risk of being damaged by visitors.

The 39-metre-long Buster has remained largely buried in sand until recent years for much of the last 120 years.

“When Buster is exposed, it’s quite magnificent, and it can draw quite a crowd,” Mr Greenhalgh said.

“The community identified that they wanted to make sure Buster was protected, as well as have more knowledge about the maritime heritage of this section of coast.”

“The signage and displays we’ve put in place as part of the Woolgoolga Maritime Heritage Project aim to let people know more about the history of the region, as well as remind them that these artefacts and sites are protected under heritage law,” he said.

Mr Greenhalgh said that as Buster is one of the most intact and accessible wrecks on the NSW coast, it was important that visitors know that it’s protected.A man standing beside an information sign and tall weathered timber.

All the signs installed as part of the project include QR codes that link to a website. The website details how the Buster became a wreck and other aspects of Woolgoolga’s rich maritime heritage. 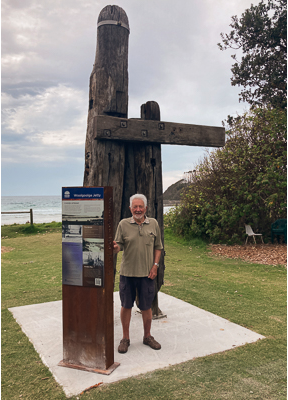 “A lot of people want to know more about the Buster and Woolgoolga’s relationship with the sea than we can fit on a sign. Having these QR codes means they can always learn more if they want,” Mr Greenhalgh said.

As part of the project, a timber pile from the old jetty that once graced Woolgoolga’s waterfront was found on a nearby beach after a storm some years ago has been erected on the site of the old jetty.

“The jetty is something that is still in the memory of many locals,” Mr Greenhalgh said.

“It used to be a focal point of the community, as a shipping hub up until it was damaged in a storm in the 1930s, and as a place where people walked and fished until the 1950s,” he said.

“Putting this pile in the jetty’s original position gives the Woolgoolga community a physical link to their maritime past.”