The annual Brisbane to Gladstone Yacht Race is one of Australia’s flagship ocean yacht races.

The approximately 308 nautical mile race takes place over the Easter Weekend, setting sail from Moreton Bay on Good Friday competing for the Courier Mail Cup, one of the oldest perpetual trophies in Australia and an Easter tradition since 1949. 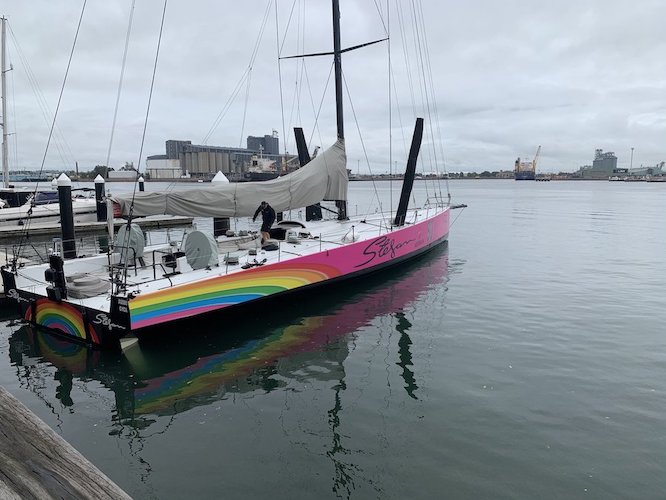 Stefan returned from the 2021 Rolex Sydney Hobart to undertake thorough checks on all its systems ahead of racing in the Brisbane Gladstone.

60-foot Ichi Ban, which won the 2018 Brisbane Gladstone, as well as its third Sydney Hobart in 2021 and its fourth Adelaide to Lincoln Yacht Race in February 2022, will be among the most competitive yachts to line up off Sandgate.

Boat Captain, Tim Sellars says Rivergate is the “perfect place” for their preparation ahead of the Brisbane Gladstone.

“Last year, we were in Coffs, ready to head north and then the borders closed, so we missed the Race. This year, we’re ready and rearing to go.

“Rivergate is ideal for us because of its location. Its facilities are second to none, and it provides deep-water berths that work for our draft, which is 3.7-metres. They are so busy, but they always manage to fit us in.”

Phil Turner’s Alive is the 66-foot Reichel Pugh, sister ship to Wild Oats X and winner of the 2018 Sydney Hobart.

James Chilman from Brisbane has recently joined the crew as Maintenance Manager/Boat Captain, working with skipper Duncan Hine to extract the best out of the crew and the “pocket maxi”.

“Whenever Alive is about to race, it heads to Rivergate,” says James. “We have crew from all over Australia and New Zealand and we haven’t raced together for a while, so we’ve been based at Rivergate, training for the past few weeks.”

Their most recent foray was the Australian Maxi Championship in Sydney in early December. Mechanical issues caused Alive to withdraw from the 2021 Brisbane to Gladstone Race and the Sydney Hobart, so the crew is eager to put those races behind them and score a win in this one. 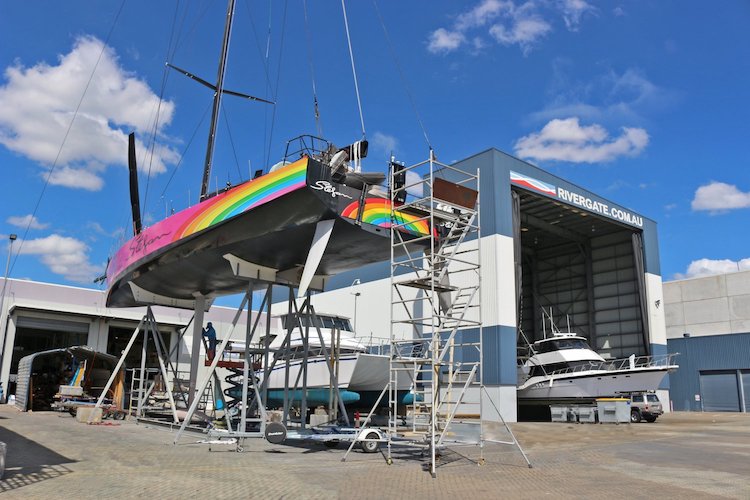 At 80-feet, the vibrantly painted Stefan is one of the largest yacht’s in this year’s Brisbane to Gladstone Race. 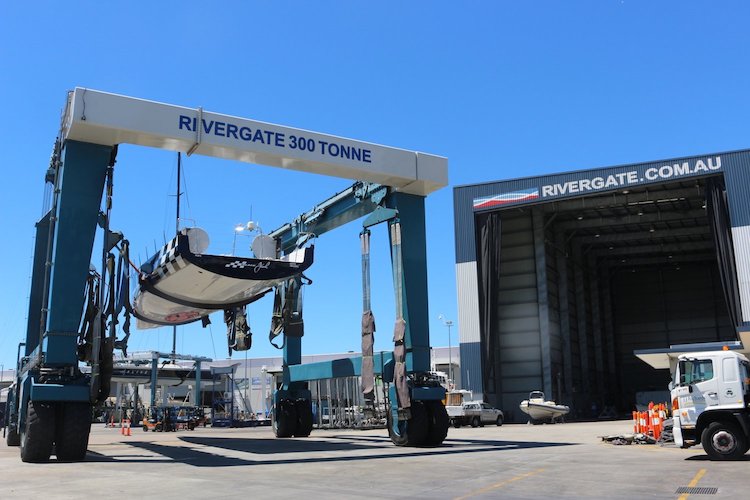 Black Jack has been a Rivergate Marina & Shipyard customer for 15 years. 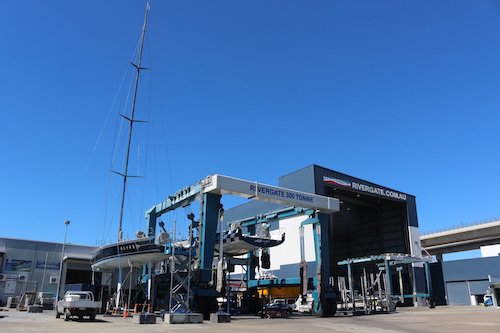 The 66-foot Reichel Pugh, Alive is a regular at Rivergate ahead of major races.

Peter Harburg’s Reichel/Pugh 100 Black Jack, with its distinctive navy-checked hull, is a familiar sight at Rivergate.

“Peter has kept his boats there for 15 years and over that time has carried out every kind of work that you could think of.

“Rivergate is ideal for the general marine trades on-site: mechanics, painters, machinists; the large yard and deep-water access to Brisbane River. We bring our rigger in from Sydney because he sails with us – Bruce Clark from Sydney Rigging.

“For this year’s Brisbane Gladstone, the crew is mostly from Queensland,” Alex reports. “First, we’re headed south for the Pittwater to Coffs, then Brisbane to Gladstone. You could say it’s a well-oiled machine.”

Another eye-catching yacht is the hot-pink-hulled Botin 80, Stefan, owned by Grant Wharington and Adrian Seiffert. The vibrant yacht is sponsored by hair salon entrepreneur and offshore racing champ, Stefan Ackerie OAM. At 24-metres, it’s one of the biggest yachts in the Brisbane to Gladstone Race this year.

“We now have a full-time manager on board, Theo Somssich, and he’s been checking all the systems, going through everything so as there’s no gear failure,” explains Adrian.

“Carl Crafoord and four others are up from Sydney, but the majority of our crew are from Queensland.

“We always choose Rivergate for maintenance and repairs,” he continues. “After returning from Tasmania after the Sydney Hobart, where we performed extremely well coming in fourth, we carried out all our pre-race preparation here.

“I think it’s one of the best marina facilities on the east coast of Australia. I’m a real fan. I can’t express my admiration enough. I recommend it to everybody. They have all the services, the team are very helpful, great facilities, location, and a ‘can do’ attitude.”

Rivergate’s General Manager, Andrew Cannon took time out to wish all Rivergate race yacht customers safe, fast sailing for this year’s Brisbane to Gladstone. “We’ll be waiting for you on your return with the same personalised service and professionalism you’ve come to expect from the team at Rivergate.”

For more information about the race, visit www.brisbanetogladstone.com

“Gigs by Festival of Sails” … bringing the party back to town!

Top marine brands on board for 2022 Sydney International Boat Show