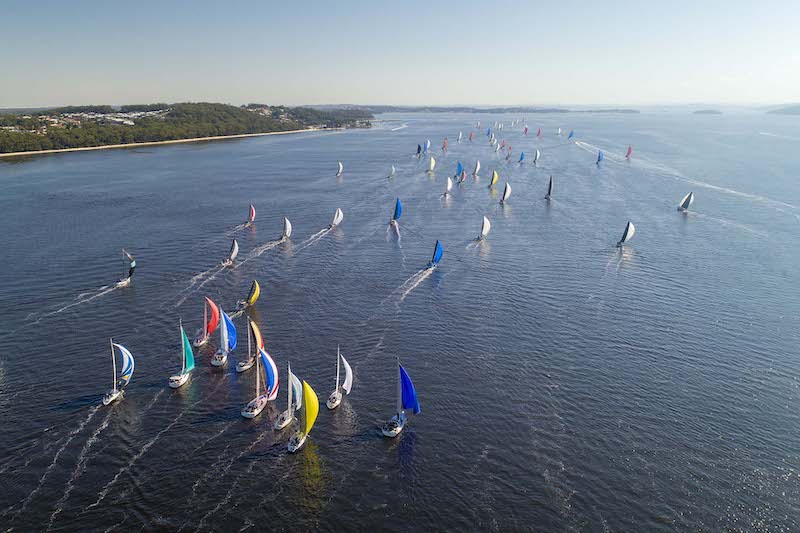 The start was delayed for over an hour as a morning westerly conceded to a southerly airstream under crisp blue skies. With temperatures reaching a balmy 25 degrees, any doubts that Port Stephens is a tropical paradise were quickly dispelled.

Only two boats had PHS handicap adjustments overnight as Monday’s blanket finish, when a summer-style nor-easter brought the tailenders up to the frontrunners, wasn’t an accurate form guide.

Today was far fairer, the sou’easter strengthening to around 12 knots and mostly lingering to the finish.

There was no catching Little Nico this time, the Shaw 11 claiming the lead after 200 metres and stretching it. Rob Dawes again showed why the Marten 49 is such a capable cruiser-racer, claiming second across the line in Division 1 in Indigo, some six minutes in arrears.

One of the prettiest yachts in the fleet, the aptly named Amazing Grace also showed amazing pace in the conditions, taking first place on handicap. It’s a 19-year-old Swan 45 One Design, built in Finland to a German Frers design. Of the 60 built, only one made it to Australia.

Skipper Malcolm Roe describes the yacht as an oldie but a goodie, and he relishes sailing in fun regattas like Sail Port Stephens.

“It was a classic Sail Port Stephens day, so it was lovely to be out there,” he said. “We hit all the corners well but we’re a Corinthian crew who enjoy sailing together and having fun. We don’t put too much pressure on ourselves.

“Hats off to the race committee as well for postponing the start as it would’ve been disastrous.”

In Division 2, Newcastle’s Joe de Kock scored a back-to-back victory aboard his Dehler 44 KD4, edging out Paul Heyes on the Thompson 920 Road Runner, and the Beneteau 40.7 JAB in third. Line honours went to Road Runner from KD4, while KD4 leads the overall series from Rumbo and Lost Horizon. 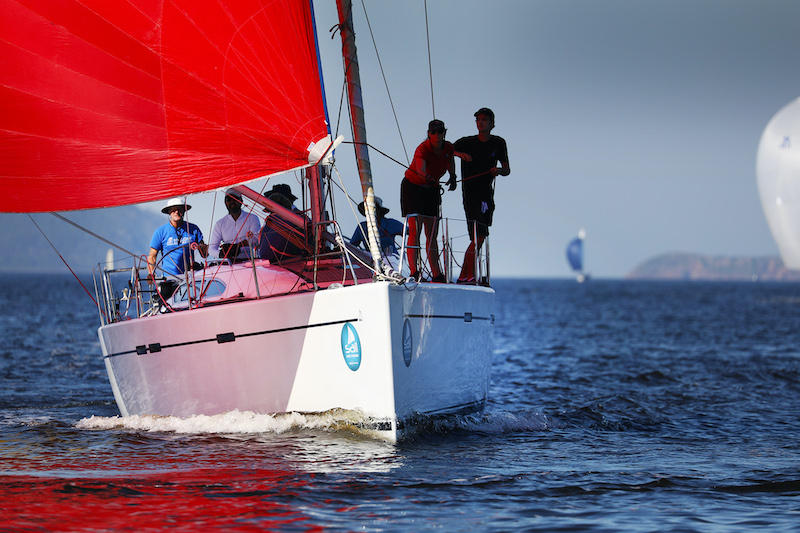 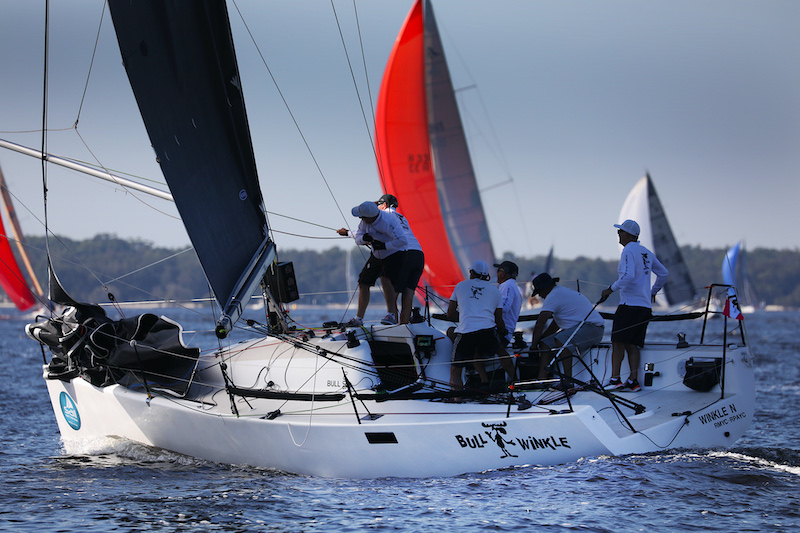 “I don’t know what two wins does to our handicap, but it makes me nervous,” de Kock, a renowned Farr 40 owner, joked. “But if we get some proper upwind and downwind legs tomorrow, that will be good for us.”

The Dehler was damaged in a grounding and required keel structure repairs, which de Kock’s team of shipwrights tackled between jobs over the past two years. He set a deadline of Sail Port Stephens.

“I’ve always wanted to do the Commodores Cup – everyone talks about having such a good time, and now that we’re here I’m just enjoying the sailing so much … in fact, the past couple of days were some of the nicest I’ve ever spent on the water.”

The crew of the Farr 40 Nutcracker will be joining de Kock for this weekend’s racing but he’s considering sailing KD4 and leaving his Farr at home: “We’ve had so many high-pressure Farr 40 regattas we might take the level down and enjoy it. Even though it would be PHS, I think we could sail the boat exceptionally well.”

Peter Farrugia’s Bullwinkle, a Bull 9000, led the Division 3 fleet home and took the handicap double, beating two very handy yachts in the IRC-optimised Adams 10 Get it On from Southport and Farr 31 SoFarr. Overall, Bruce Thomas’s Elan 37 Aeolian holds an eight-point cushion over the Adams Cruising 10 Rant and Rave, and Bullwinkle. 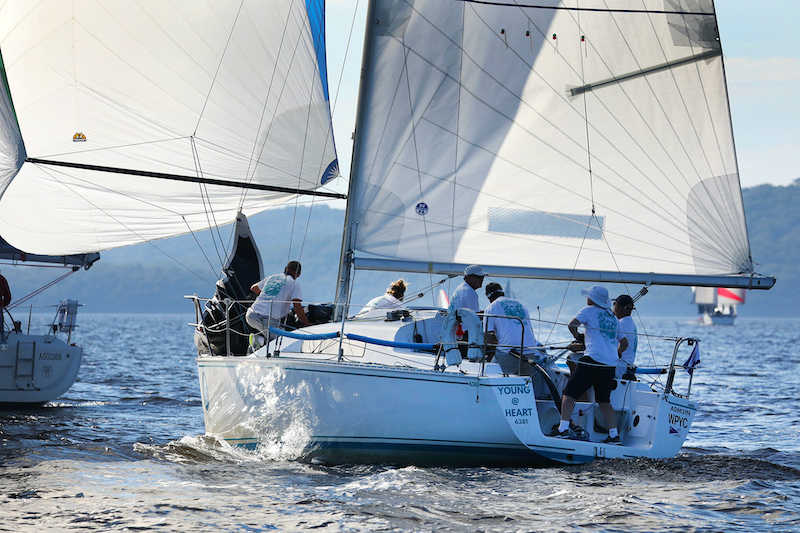 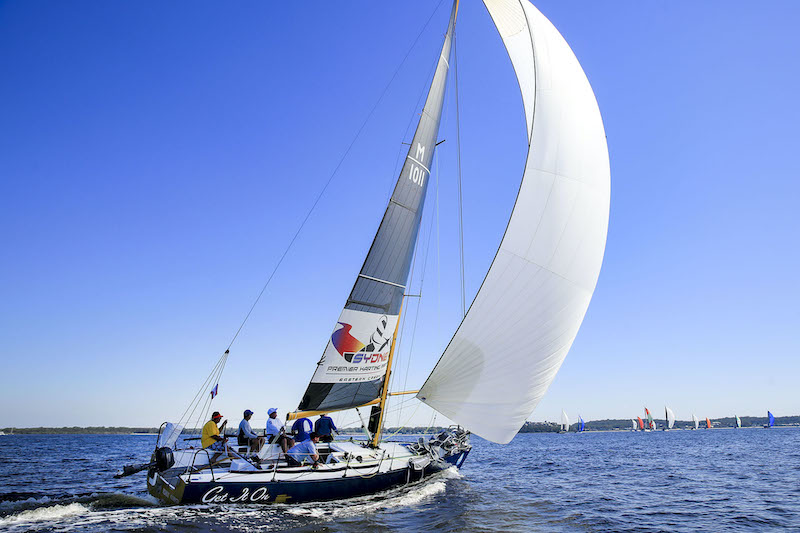 The three-race Bannister Port Stephens Commodores Cup series ends tomorrow, ahead of a disco-themed presentation ball that pays homage, at least in dress sense, to Lionel Richie and the Commodores band. Australian band Sons of Beaches, with Scott McRae, will entertain a sell-out crowd of 350.

An innovation for this regatta is the Australian Club Championship sponsored by Pantaenius, which tallies the best divisional scores of yachts representing the various clubs. Currently it’s Newcastle Cruising Yacht Club holding sway over Royal Prince Alfred Yacht Club and Port Stephens Yacht Club. The trophy will be presented when the regatta concludes on Sunday.

Thursday is a layday, with a fundraising lunch for sailing charity Making Waves, before the action heats up with the Yachting NSW Championships, Port Stephens Trophy, Fareast 28R National, Tasar NSW titles and more from Friday.