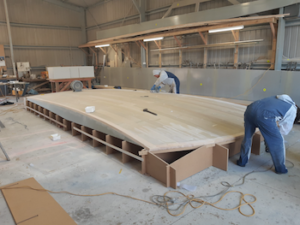 The privately-owned, custom-built, displacement-hull power cat is on track for delivery by May 2023 to an experienced owner looking for volume and ease of cruising. 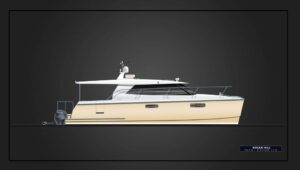 So far, according to Grant, he has used the Z-press to join the DuFLEX panels for superstructure and cabin top.

“It’s a first for me,” he states. “Roger is a huge fan, so we went with it. It’s labour saving, comes as a kit, and the DuFLEX is lightweight and sturdy.”

The 12-metre vessel is a “fairly straight forward” build, single level sedan with a beam of 4.8-metres.

“Using DuFLEX has made construction a simple process and at this stage we’re impressed with it. We’ll know more when we do the hulls,” Grant adds. 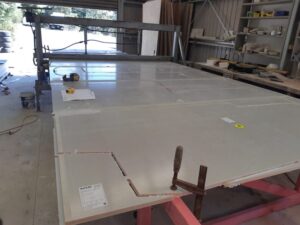 Using ATL’s Z-Press streamlines the composite panel joining process, applying heat and pressure to cure the epoxy adhesive on the Z-Joints. Joins cure fully in 7 to 20 minutes, depending on the ambient temperature, type of hardener, core type and thickness of the panel.

Roger Hill, specialist power multihull designer, says the client sought a well-appointed powercat for “the next phase of his cruising lifestyle”.

“I have always said that these displacement hull power cats we design are ‘sailor’s power boats’,” he explains. “That is, when you have been a yachtie all your life and you’re facing the unavoidable ravages of time on your old body but don’t want to give up boating, these cats are a good option!

“For Auckland-based yachties who have been cruising around at around 6 to 8 knots, a lot of the time motoring (as you get older), and a lot of the time beating to windward, these smaller displacement hull power cats are ideal.

“They cruise most economically around 14 to 15 knots, or about twice the speed you have been used to going all of your previous boating life, and they are really fuel efficient. Also, they will motor directly into any head wind and nasty sea state without spilling your drink, or leaning over.”

Fortuitously, the client is Roger’s very first when he struck out on his own and established his design firm 27 years ago.

“He owned his lovely 11.9-metre cruising yacht from new, it fitted his requirements perfectly all of that time and he kept it in immaculate condition. Like all of us, he is getting older and the physicality of sailing a yacht basically on your own was starting to tell.

“He made the very hard decision to sell and move on with the next phase of his boating life. They went out for a ride on a smaller 10-metre displacement power cat we designed and from that, he commissioned his new 12-metre design.”

While there is nothing particularly new or radical about the design, there are some unique features.

“The client wanted something that he could trust and depend on to fulfil his future yachting aspirations,” explains Roger. “As with the original sailing yacht, the new power cat is specifically detailed around his requirements.

“Things like the very clever swimming diving platform that lowers down between the motors to form steps down to a wider bottom panel that allows easy access into the water for diving and launching a small RIB.

“It’s just the two of them, and the layout will be very comfortable for them to live aboard for extended periods through the summer as they have done with their yacht for many years.

“The choice to go with outboards was based on being able to explore areas they have previously not been able access with a deep draft keel, so adding a new dimension to their cruising ambitions.”

The choice to use the DuFLEX system came from the client seeing it for himself, visiting the 16-metre “Omahu” and speaking to its owner who had a previous sailing cat built out of DuFLEX and was extremely positive about the process.

“The preliminary design for the structure of “Celeste” was based on standard foam cored composite boat building methods. From that the options were costed up and DuFLEX won the job!

Cored with Divinycell foam, the DuFLEX panels in CELESTE have a combination of H80 and H100 densities in the hull shell. The hull bottoms are cored with 20mm H100 DuFLEX Strips that are laminated with a 460 grm unidirectional E-Fibreglass which will have an additional laminate applied on both sides, while hull sides are a mix of H80 thicknesses and laminated with double layers of 800grm quadraxial chosen to meet performance and engineering requirements.

Grant Symmans was a more traditional builder accustomed to using plywood, timber, and fibreglass skinning methods of construction, but he was intrigued with system and its multiple benefits – precision cut, time saving, labour saving and minimal waste.

Grant and his two co-workers are now well into the build.

“They made the large cabin top first and it went together very well and quickly, and they are now starting to plank up the first hull.” 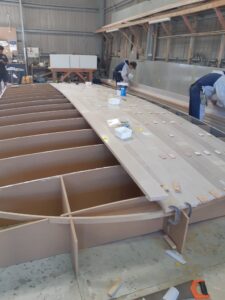 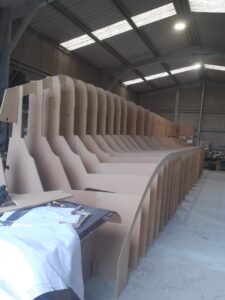 “The client, whose father was a New Zealand timber boat builder and built many cold-moulded Kauri sailing yachts, was quite tentative about the process but is now also becoming much more relaxed and happy as he sees the boat coming to life.”