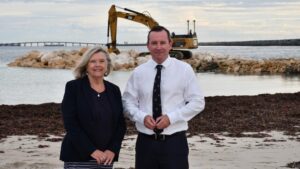 The Mayor and Premier agree the project will have a significant impact in the boating community. Credit: Supplied/City of Rockingham

The spur groyne at Point Peron, originally built in the 1970s, is being refurbished and extended by 20 metres using approximately 10,000 tonnes of rock from the existing structure and an additional 5,000 tonnes of rock trucked to site.

The extended groyne will trap a greater amount of sand and ease erosion on surrounding beaches. The adjoining boat ramp will also benefit from greater protection from waves and a reduction in sand entering the facility, limiting the need to dredge each year.

Identified as a high priority coastal erosion project as part of the State Government’s $5.5 billion WA Recovery Plan, the City of Rockingham received $650,000 to undertake the work.

The City of Rockingham has awarded Perth-based company WA Limestone the contract for the project, which will create seven full-time and a further four part-time positions. The project is due for completion by the end of May.

“This is an important project that will not only address the erosion issued at Point Peron but also provide improved launching and retrieval conditions for skippers who love getting out on the water.

“The key objectives of the WA Recovery Plan were to drive economic and social recovery across the State and this project is an excellent example of how the plan is meeting these objectives.

“The Department of Transport is highly regarded for its coastal management expertise and is working closely with the project team at the City or Rockingham to provide assistance and experience that will progress the works as planned.”

“We have some beautiful beaches in Rockingham, enjoyed by both swimmers and boaties.

“This project will make a big difference by providing improved year-round boat launching conditions for skippers.”

“Planning for future generations is a key aspiration in the City’s Strategic Plan, and the delivery of Point Peron spur groyne and breakwater aligns strongly with this.

“The City’s Coastal Facilities Strategy sets a clear vision for the infrastructure that is required to maintain coastal recreation for boat users, and this project is the latest in a long line of improvements to the Point Peron boat launching facility.

“Importantly, the State Government has made a significant contribution to this project, and the City thanks the Department of Transport for its support.

Celebrating the global launch of the exceptional Ocean Alexander 28 Explorer