After signing a world-class technology partner, Poseidon Marine H2 has opened to investors via the online trading platform VCEX.

Its team of engineers is seeking to raise the initial capital of A$410,000 to fund the project’s feasibility study to develop a hydrogen-powered boat which they expect to have in the water by the third quarter of 2023. 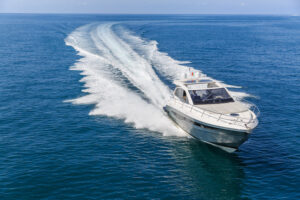 The company says overall they are building a better boat that just happens to be powered by hydrogen.

“Our mission is to construct one of the world’s first hydrogen-powered boats in the next 18 months that will meet the rapidly growing demand for technology that will decarbonise the maritime industry,” says Poseidon Marine H2 Director and Principal Engineer, Peter Mastalir.

“We believe we will achieve this by focusing on building a better boat that has an equivalent operational range, requires less maintenance and is cheaper to run than traditional fuel sources like diesel.”

The company is led by a team of globally renowned engineers and academics who have 75 plus years’ experience working on some of Australia’s most innovative, large-scale mechanical and electrical based projects.

The team intends to leverage existing technologies as much as possible, which is why they are looking to use a current hull design with a unique upper deck and internal layout.

“This approach allows for a new top to be seamlessly installed onto a repurposed hull powered by green hydrogen, meaning uptake will be quick as the assets already exist.”

The company says they will be targeting the new motor yacht market, which has a projected market size of US$11.05b, with Europe making up 35 per cent of the sector (US$3.87b).

“We see a substantial market opportunity in Europe. By 2030, the new motor yacht industry in Europe will be worth US$5b, meaning there will be a large technology vacuum across the entire sector.”

“Poseidon H2 plans to provide the European market with the technology needed to ensure their 2030 transition is successful and can be sustained. We believe we can do this by being first to market with a solution that could benchmark the standards for hydrogen boating globally.”

Their technology partner, Dynamic Efficiency, has direct connections with a marine engineering company at the Gold Coast City Marina and an extensive list of relationships with major industry players and universities, which will prove critical to executing the project.

“We will leverage our existing relationship with large homegrown manufacturers to form licensing deals which will help them offer hydrogen boats and create an internationally competitive industry within Australia.”

“As we develop the technology we will seek to form offtake agreements with boat manufacturers so they can start building hydrogen-powered boats as soon as the technology is commercialised”.

The company will also ensure its technology has diesel applications to provide the market with a transitional option.

“This means the company can leverage current fuel sources while future-proofing the boat for conversion at a later date to hydrogen when the fuelling infrastructure is adequate.”

Poseidon Marine H2 was founded with the shared vision of harnessing the potential of renewable energy to take the marine sector into industry 5.0. Their mission is to build a hydrogen-powered boat in the next 18 months that will meet the rapidly growing demand for technology that will decarbonise the maritime industry.  They will achieve this by focusing on building a better boat that has an equivalent operational range, requires less maintenance and is cheaper to run than traditional fuel sources like diesel.