Smoke on the water

Local Worimi Elders conducted what is possibly the first ever traditional smoking ceremony on the water at the official naming of two new oyster reefs in the Port Stephens-Great Lakes Marine Park. 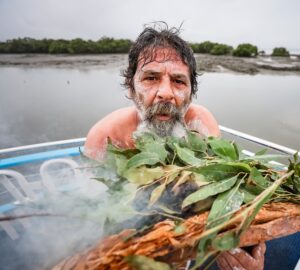 Worimi Elders conducted the smoking ceremony out on the waters of the Marine Park at Karuah, adjacent to one of the new reefs, with stakeholders and community representatives who supported and participated in the project in attendance.

With Australia having lost an estimated 99% of its oyster reefs since colonisation, the restored oyster reefs represent a step to redress this massive historic loss and restore the balance in our estuaries.

Conducted between 2018 and 2021, the project has restored 7.5 hectares, or 11 soccer pitches, of new Sydney rock oyster reef habitat which has since become home to over 55 million oysters.

“The reefs not only provide habitat for different fish species boosting fish numbers, they also help protect the shoreline from erosion during large tides.”

Ms Jenkins said the public who want to learn more about the oyster reef project can access a new video showcasing the project or check out the new signage installed in three strategic locations around the estuary.

Worimi Traditional Owner and NSW DPI Aboriginal Project Officer Marine Estate, Regan Lilley said he is proud to be part of a project that will be there for future generations to come.

“Setting up these reefs to look after water quality is not just a here and now thing, that’s going to be there for the next couple of generations and keep on going after that,” he said.

“The advantages coming back are going to be there for generations to come,” Mr Lilley said.

The reef restoration has been completed by NSW DPI Fisheries under the Marine Estate Management Strategy, in partnership with The Nature Conservancy and the Australian Government through their Reef Builder initiative

Click here to find out more about the Shellfish Reef Restoration project.

A practical kind of romance with a Belize 66 Daybridge