Nominations for the 2022 Australian Sailing Awards are now open, with the annual event set to recognise clubs and members for their outstanding achievements and contributions to the sailing community over the past year.

The Australian Sailing Awards are the peak awards for the sport of sailing in Australia and will act as a national celebration of sailing and its significance at a local, state, and national level.

It is important to note that nominees only need to submit one nomination for both State and National Awards, which must be submitted during this nomination period (Monday 27 June to Sunday 31 July). Nominations will first be judged for their relevant State Awards, with the winning nominations from the State Awards then put forward as nominees to the judging panel of the National Australian Sailing Awards.

Key dates for this year’s process include: 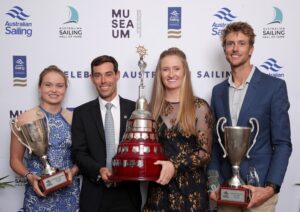 Nominees will be judged for their achievements over the nomination performance period, which is 5 August 2021 to 31 July 2022 for both State and National Awards.

Following the COVID-19 pandemic and a challenging period for the sailing community, we are excited to host the State and National celebrations in-person once again. We look forward to honouring all the best aspects of our sport, from our hard-working volunteers, through to inspiring performances from Australian sailors on the international stage.

In 2021 it was the Ocean Racing Club of Victoria who took out the title for Club of the Year after hosting nine offshore racing events attended by more than 274 yachts and increasing training course participation by 76%. Lisa Darmanin received the national award for Female Sailor of the Year for the second year running, while Mat Belcher and Will Ryan were crowned as the Male Sailors of the Year following their Gold Medal winning performance at the Tokyo Olympic Games. A full list of the 2021 Award winners can be found here.

Click here to find out more about the process for this year’s Awards.

Nominations are now open and will close at 8pm AEST on Sunday 31 July 2022.

Nominate now for the following categories:

• Male Sailor of the Year

• Female Sailor of the Year

• Para Sailor of the Year

• Youth Sailor of the Year

• Offshore Sailor of the Year

• Coach of the Year

• Club of the Year

• Instructor of the Year

• Official of the Year

• Volunteer of the Year

New Infrastructure for the Whitsundays