The latest Roger Hill design is a dramatic departure from the multihulls he’s built his reputation on for more than 25 years. 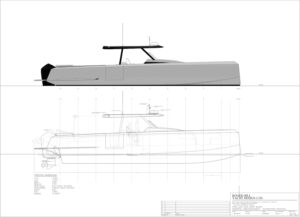 The custom-designed 13.9-metre monohull motor yacht, named “Tank”, was commissioned by a former client and, while a step out of Roger’s comfort zone, the new build will still have a number of “Hill hallmarks”, including the lightweight, durability of the DuFLEX panel system.

As Roger explains, the brief was to design a monohull motor yacht for a couple who were intent on downsizing and using their boat more “casually”.

“Their ideas and needs have changed and evolved,” says Roger. “Their family has grown up and they would not use a big boat enough now there is only the two of them.

“A key factor was power and fuel capacity for longer trips. It’s powered by twin Mercury V12 Verado engines, with 600 hp each which are hailed as ‘game changing’ for their extraordinary range and performance, as well as the outboard segment’s first steerable gearcase and industry-first two-speed transmission.

“The 1,900 Litre fuel capacity will provide approximately 700 nautical miles of range at a cruising speed of 25 knots. But the boat will also be capable of 50 knot runs to Stradbroke Island for a picnic.”

The boat is being constructed by Julian Griffiths and the team at Noosa Marine from DuFLEX/Foam Composite Panels of varying densities; H130 Divinycell in the hull bottoms and H80 in the Topsides to provide structural performance and also to comply with engineering requirements to meet NCSV Compliance under AMSA. 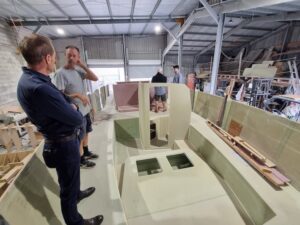 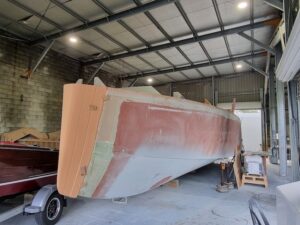 Construction on “Tank” is halfway through. “It’s called ‘Tank’ because it looks like one,” says Julian.

“It looks like a big superyacht tender, with double berth and everything that opens and shuts onboard, including an outdoor galley under a T-top, lounge front and back with tables that can fold down.

“It’s about 8 tonnes, but it’s light for its length and it will certainly be speedy!”

No stranger to working on monohulls as the designer and builder of his own brand of weekender, the Noosa 7, Julian reports that the Hill monohull is proving “a tricky technical build because it has a lot of mechanical complexities”.

“For example, the anchor tucks behind an anchor locker and because of the plumb bow, it has to pivot out on an actuator. Then there’s a feature a lot of new boats have these days, the sides all fold out to give owners more leisure space. Plus, the duckboard boarding platform rises in and out of water and there are retractable awnings for added shade.”

Along with the large double berth, “Tank” boasts plenty of outdoor seating, a day bed that converts to an alfresco night berth. Another unique feature is the low draft of just 600cm, so the owners can practically beach “Tank” wherever they choose to anchor.

Fortunately, Roger has specified the DuFLEX panel system which Julian has many years of experience building with.

“DuFLEX makes the build quicker and more economical. It makes the vessel lightweight and strong. It’s a win-win,” he says.

For Roger, the new monohull is a stimulating adventure into new waters, and “a big confidence vote for the client to design with me”.

“Having the close relationship I have with the client, Julian at Noosa Marine and the technical advice and engineering expertise provided by the team at ATL, has resulted in a combination of solid information that has optimised this design.”

Delivery is scheduled for the end of 2022 in time for summer.