During event week, the sailors joined Curtis for an intimate Q&A session, coffee and tour of the Australian team’s tech base during the T-Mobile U.S. Sail Grand Prix in Chicago. 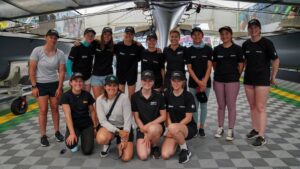 The group, who were joined by their coaches and Australia’s Careers intern Madeline Gillis, quizzed Curtis on her rise to the highest level of sailing and even got a ‘sit’ behind the wheel of Australia’s F50 Flying Roo.

WASZP sailor Lily Rainham described the morning as ‘an amazing and unforgettable experience’.

“It was inspiring to hear about Nina’s pathway to SailGP and her vision for the future of the sport,” she said. “Learning about the F50 and how manoeuvres are done aboard with team Australia was also really cool and offered a lot of insight into what happens during a race.” 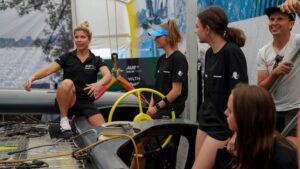 Olivia Schmitt, who sailed a foiling boat for the first time in Chicago, added that it was ‘inspiring to see what women can achieve in the sport’.

“It was interesting to hear about her mindset towards competition, her role on the boat and how the team brings it together, especially when they are struggling on water.”

“All in all, the Inspire program was an experience unlike any other I have had in sailing. I am looking forward to foiling more in the future and I cannot wait to see how many others the program impacts positively.”

Among the sailors was Inspire’s youngest ever female participant, 14-year-old Grace Renz. After learning to foil on a WASZP for the first time through the program, Renz is keen to pursue the sport. 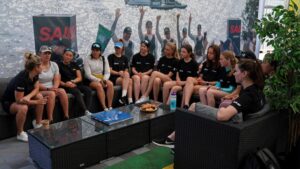 “I hope that we will have the chance to foil more at Chicago Yacht Club and compete on WASZPs and other foiling boats on the national level.

Speaking about the event, Curtis added: “It was wonderful to share my experiences and inspire the next generation of SailGP athletes. During the Q&A it was very evident that these legends are hungry for change and to take on the top level of sailing.”

All eight sailors were taking part in SailGP’s Inspire Racing program, which provides life changing opportunities and new career pathways to young people as part of its aim to leave a positive legacy behind.

Propspeed improves boat efficiency and proven to save fuel

Let History Do The Talking