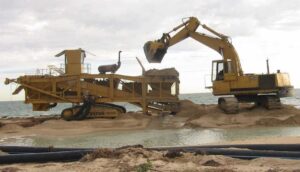 DoT Coastal Facilities Director Donna West said 150,000 cubic metres of sand from Pyramids Beach had been pumped north of the entrance to the Dawesville Cut since February, equalling the amount pumped in 2018 to replenish sand levels on beaches to the north of the channel.

Ms West said the $1.25 million project had again required special management following the return of a colony of Australian Fairy Terns, a species protected under State and Commonwealth legislation, to nest on Pyramids Beach immediately prior to it starting.

“DoT again worked with the Department of Biodiversity, Conservation and Attractions and the Western Australian Fairy Tern Conservation Network to schedule the works in a way that didn’t disturb the nesting colony,” Ms West said.

“DoT’s coastal maintenance work has now moved to the Mandurah Ocean Entrance for a similar sand bypassing and replenishment campaign.”

Funded by the State Government and City of Mandurah at a cost of $1.2 million, the work will see about 150,000 cubic metres of sand relocated prior to completion in November. Sand will be excavated from Halls Head Beach and pumped to Town Beach to provide safe access to the Mandurah Ocean Marina and Port of Mandurah Canals. The works replenish sand on Town Beach and ensures supply to other beaches located east of the channel.

Beach users are asked to observe the warnings in place and keep well clear of the works which will occur during daylight hours from Monday to Friday. For more information about DoT’s dredging and sand bypassing program visit their website.

Marinas22 Wrap up: The Best Yet