A search is underway for a man and a dog missing after a boat capsized off Sydney’s North Harbour near Dobroyd Head early this morning.

Officers attached to Marine Area Command were alerted to reports a man was heard calling for help shortly before 4.50am (Saturday 22 January 2022).

Local residents and a passing fisherman rescued a 25-year-old man from the sea and took him to Little Manly Beach.

He has told police he and a friend launched their boat from the Tunks Park boat ramp about 9pm yesterday (Friday 21 January 2022), but the vessel capsized about 3am.

Police are now searching for the second man and his dog, described as being a large black and white Staffordshire-type dog.

Police have been told there were no life jackets, lights, or safety equipment on board.
An air, sea and land search is now underway, coordinated by Marine Area Command and assisted by local police, Surf Life Saving NSW and the Westpac helicopter. PolAir will also be assisting.

Anyone with information about the incident is urged to contact Manly Police or Crime Stoppers on 1800 333 000.

Anyone with information about this incident is urged to contact Crime Stoppers: 1800 333 000 or https://nsw.crimestoppers.com.au. Information is treated in strict confidence. The public is reminded not to report information via NSW Police social media pages. 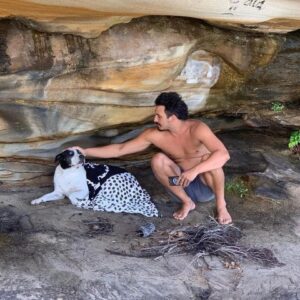 Update: It was been reported via the NSW Police Force facebook page that the dog has been found alive and well.