Local hope SKE Electrical, with Australian Moth champion Scott Babbage helming, was fast out of the blocks to lead the way at the first top mark, however a spinnaker problem allowed Manly’s Moonen Yachts and Ronstan to slip past.

That order would remained unchanged, with Daniel Turner’s Moonen gradually stretching its lead to around 20 seconds at the finish from Manly clubmate Ronstan, with Nathan Wilmot, Malcolm Page and Brett Davis aboard. 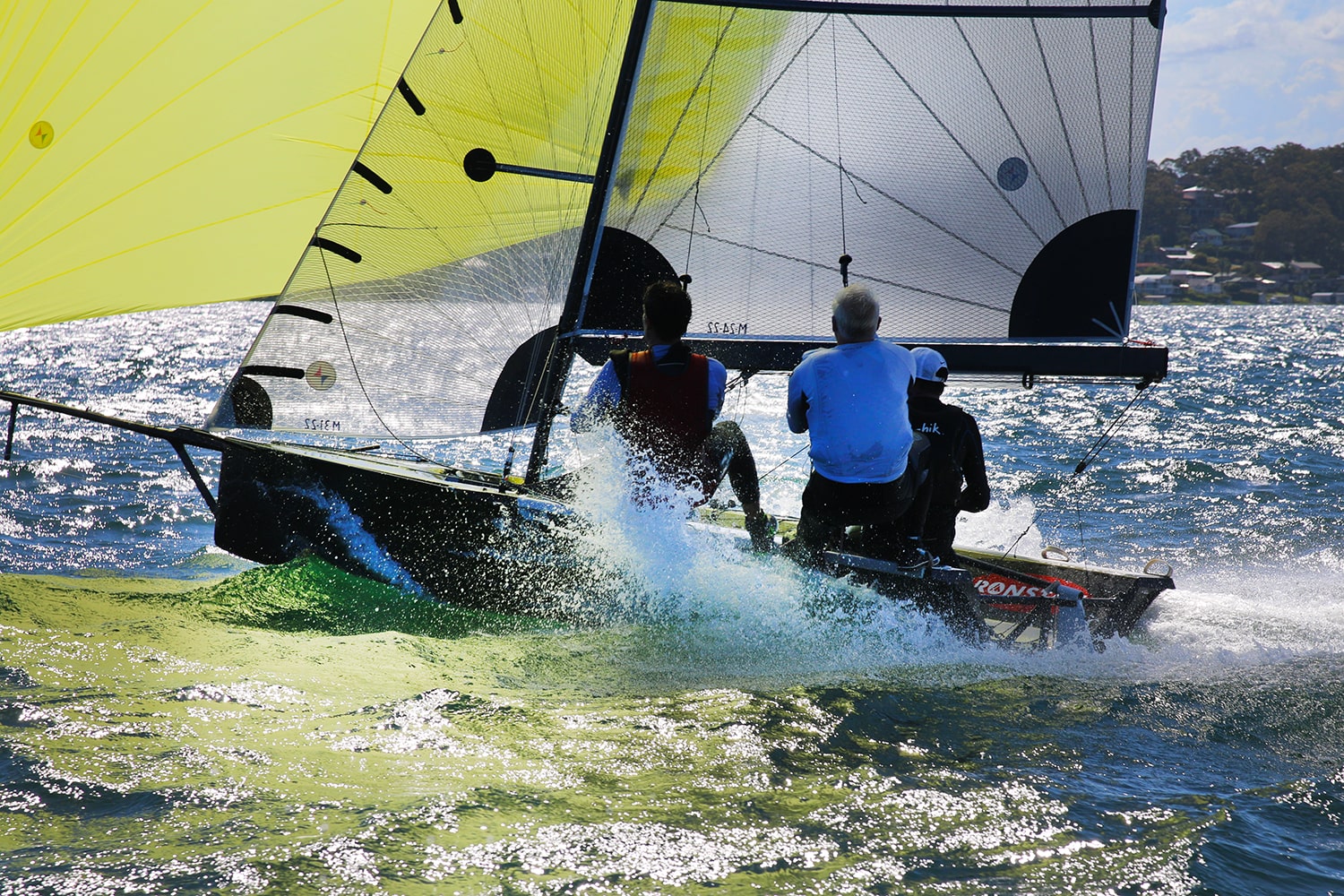 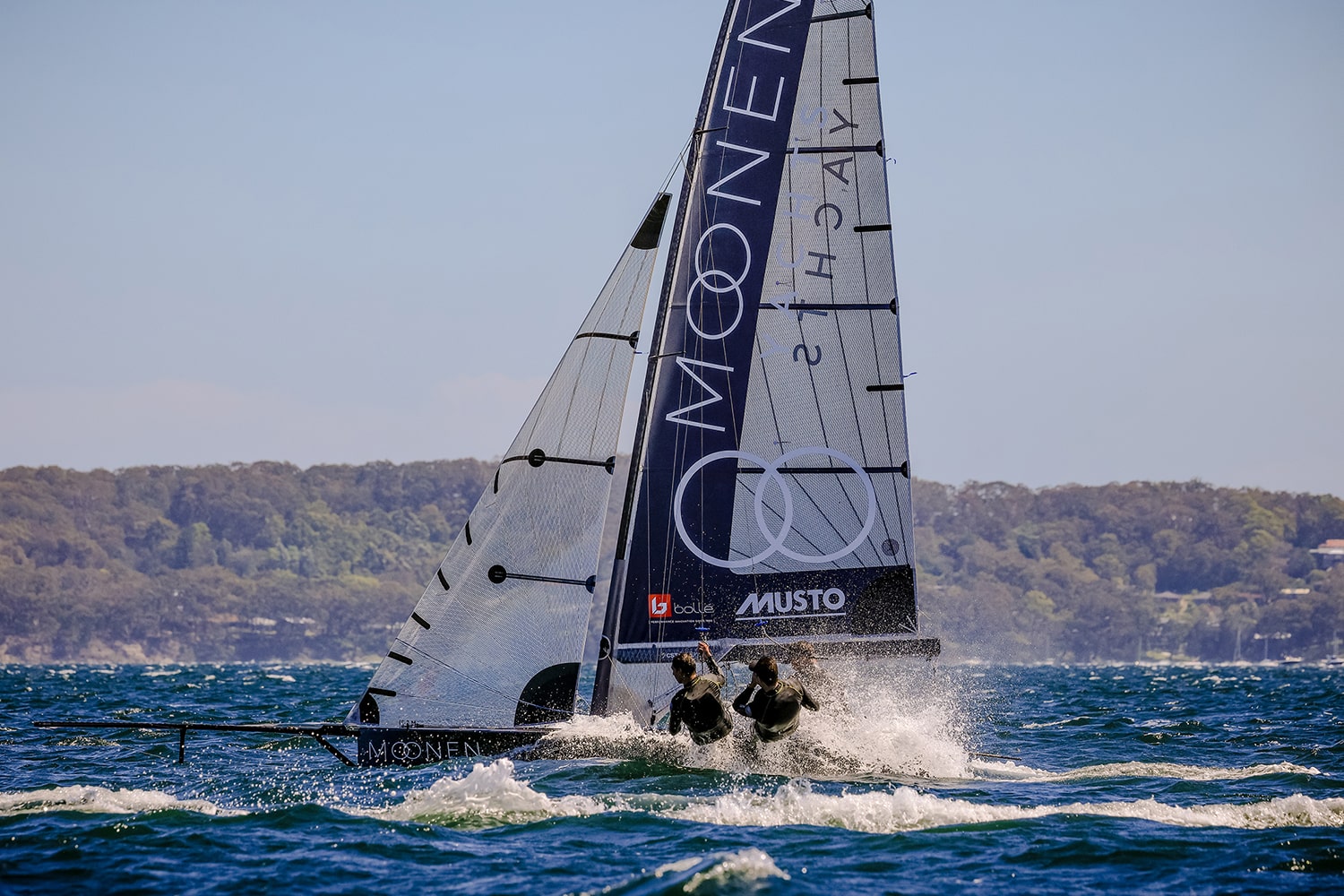 “When you look at sailing at Belmont, today’s what you imagine – nor’east, sunny, hot … it’s actually perfect,” Turner said. “It was a long race so all the big Christmas lunches started to set back in, but it was just a matter of playing up the left-hand shoreline.

“We spent most of the day there, and fortunately mostly in the lead. I’d say the top five are pretty evenly paced though – we had Nathan Wilmot on our heels all day and I think it’s going to come down to smarts and wind shifts.”

Turner won the national title in 2019 to get the monkey off his back and is not weighed down by the favouritism tag for this event.

“I don’t want to sound complacent but having these guys (Angus Williams and Matt Stenta) on the boat, it feels comfortable. But there’s not going to be any relaxing, not in this fleet.” 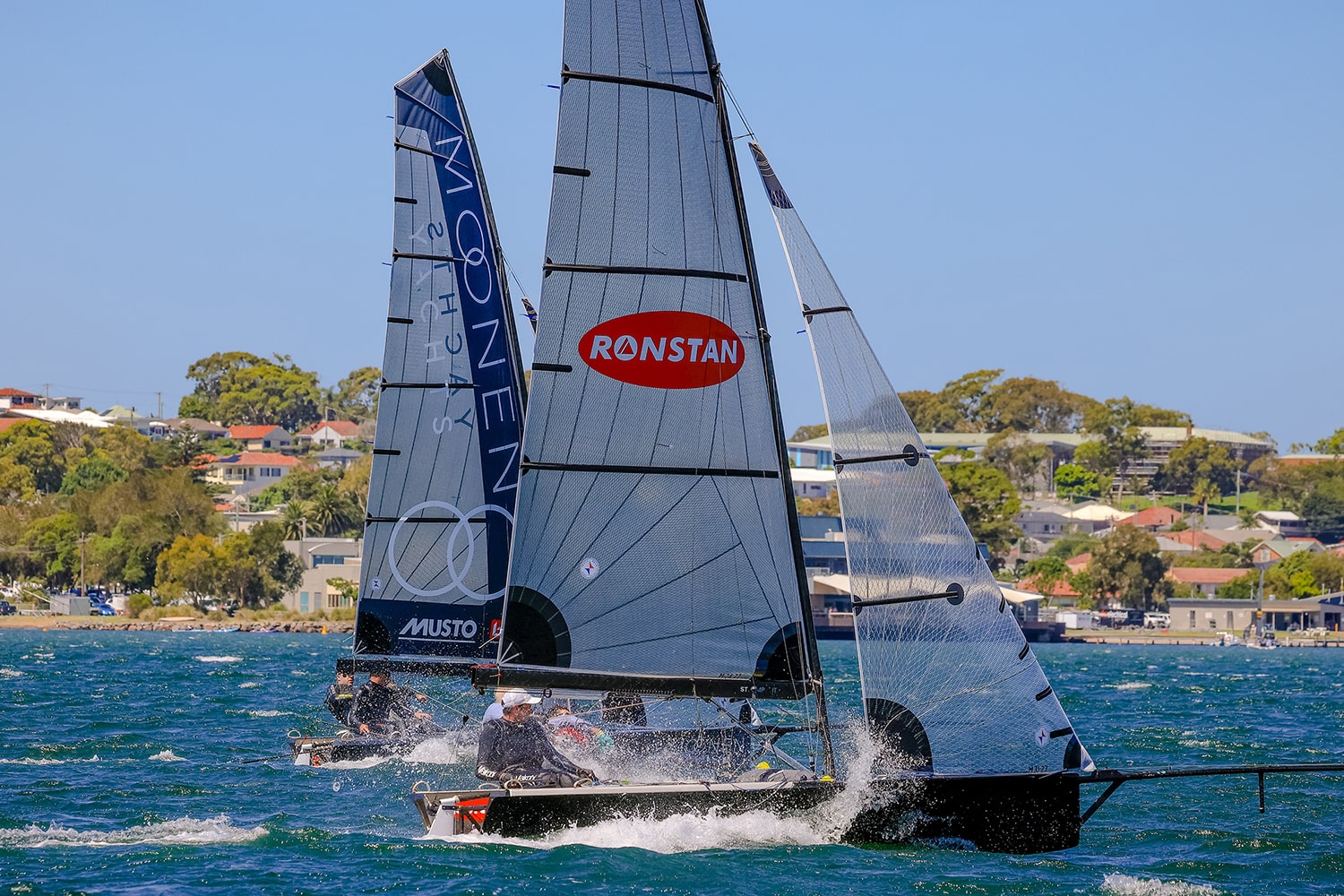 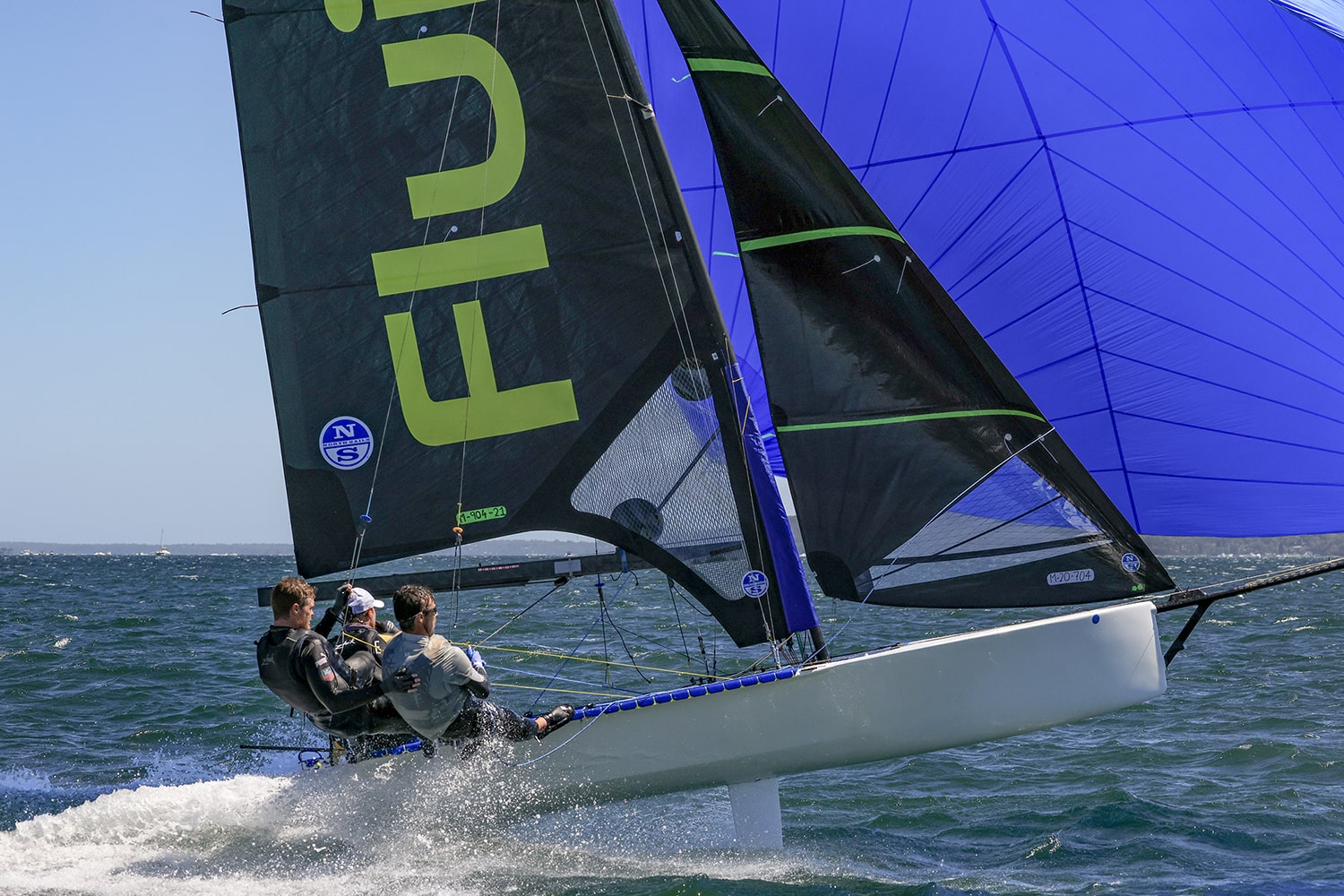 “We could sort of come back at Moonen Yachts but they were too good. I remember our first race this season was the State Championships and it was blowing dogs off chains. Daniel Turner was a clear step-up on everyone, so to be in the mix with him today was a tick to the work we’ve done since then.”

SKE Electrical’s Scott Babbage took a lot of positives from the day, despite the spinnaker issue.

“The retrieval line got stuck on the set and that left several boats through, so it was a matter of picking up from there,” he said. “We sailed the upwinds pretty well with the little rig and our handling wasn’t too bad, so can’t complain.”

The much-heralded crew of Nathan Outteridge, Tom Slingsby and Iain Jensen showed their potential with a 5th placing on Fluid.

“We had a good race overall,” skipper Outteridge said. “Five laps was a bit of a war of attrition for us and we had a few breakages to deal with, but pretty happy.” 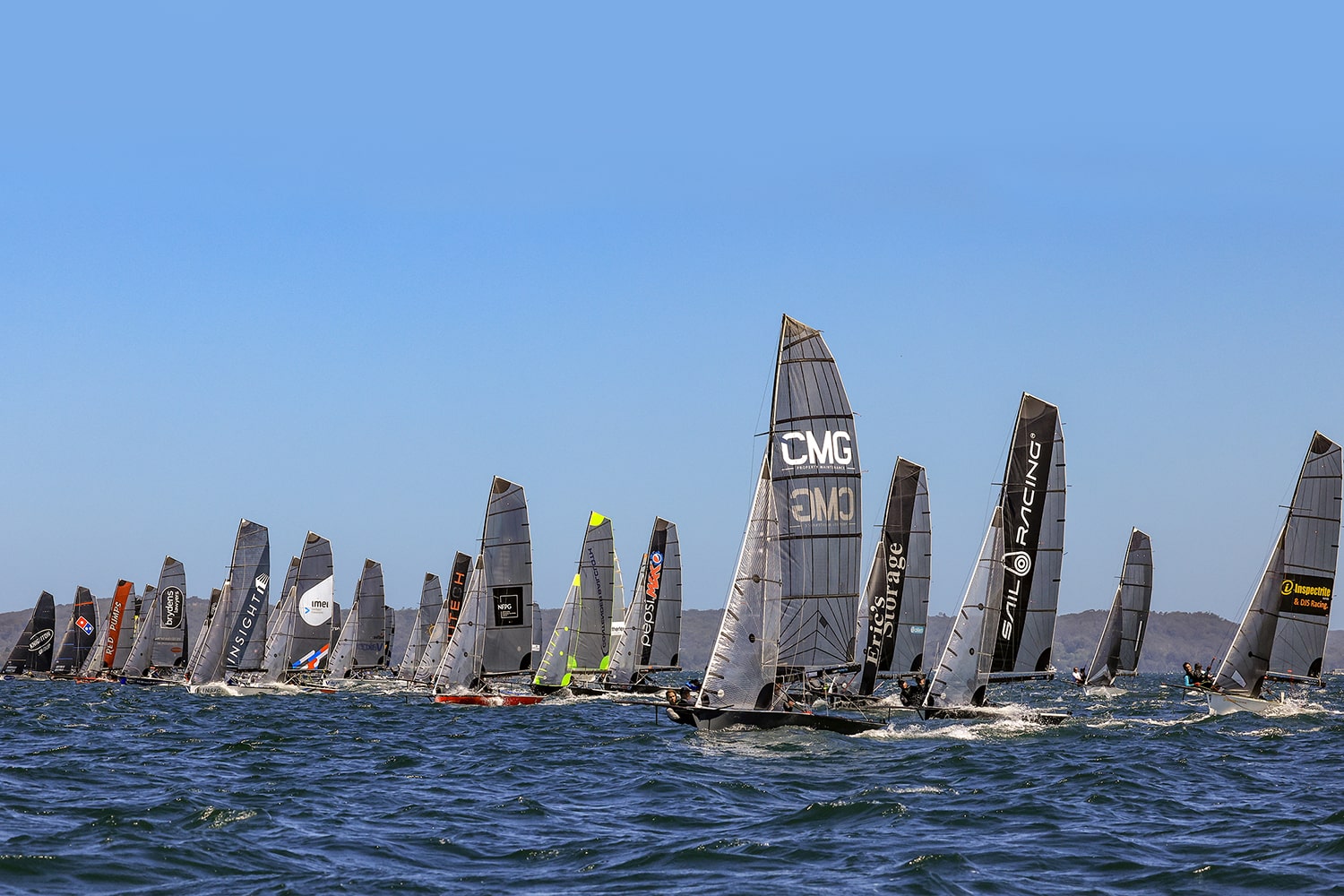 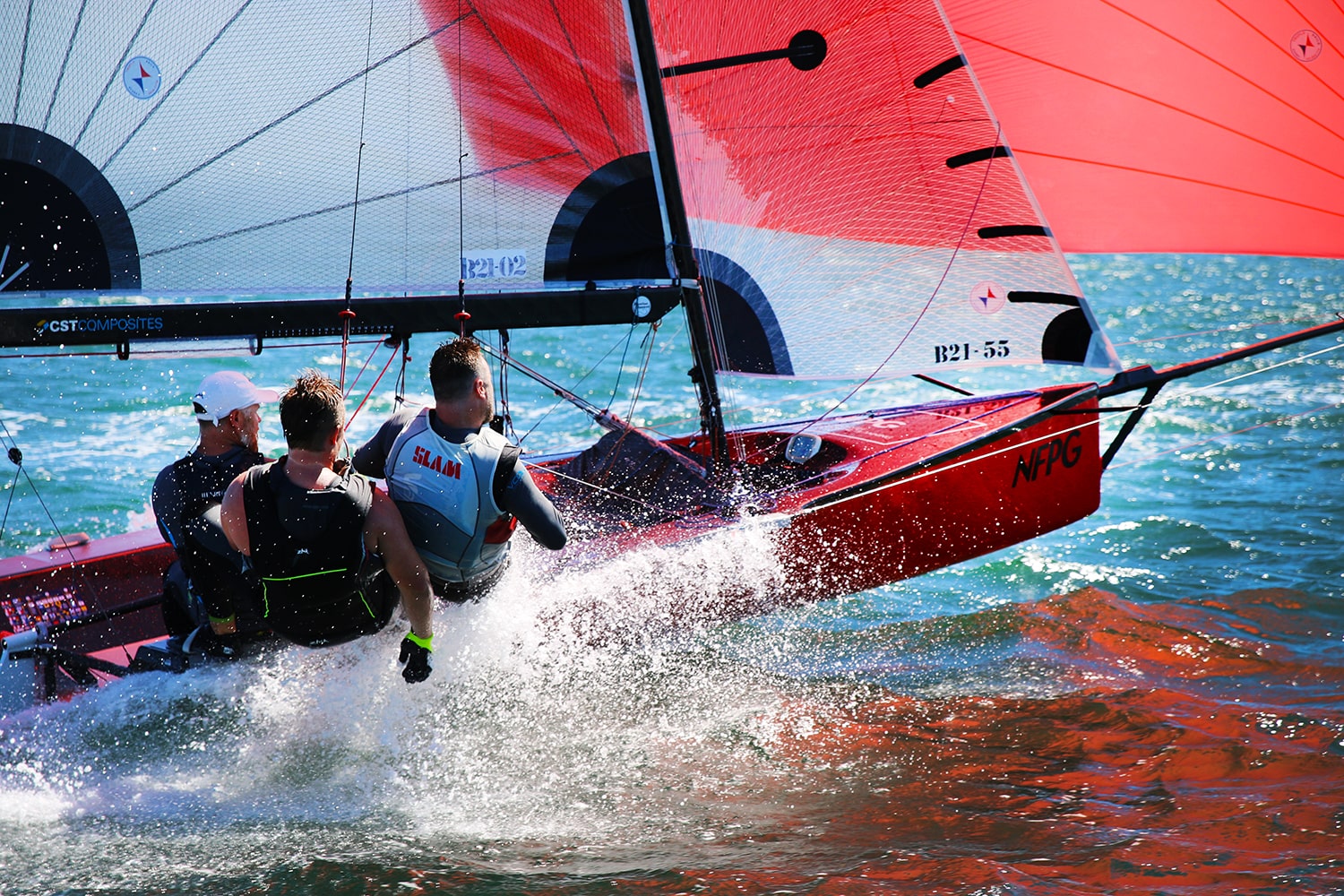 In the 13ft Skiff nationals held in conjunction with the 16s, only four of the seven starters managed to finish. First home were Max Downey and Thomas Mountstephens on Cheeky, from #9 sailed by Angus Stewart and Hugo Kemp, with Ebix third.

Races 2 and 3 start tomorrow from1.55pm AEST. Host club for the championships, which run until January 8, is Belmont 16s. Race sponsor for today was Piper Planning.