Air Force – Sailing for the win 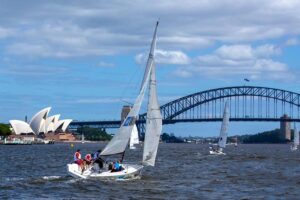 The Navy sailing team came in a close second place in both championship events, with the Army sailing team placing third in both events.

The Inter-Service Yachting Championship was held in conjunction with the Sydney Harbour Regatta over the weekend of March 5-6, racing against civilian yachts in the non-spinnaker performance division.

Although Air Force was the first service team to finish in each of the four regatta races, Navy again put up a great challenge and took out the top spot on performance handicap (corrected time).

Sub Lieutenant Angus Ekberg was skipper of the Navy sailing team and was happy with the way his team performed, improving on each race.

“Our crew came together and we produced some good results in trying conditions, but we did all of it with smiles from ear to ear and having fun while racing in close proximity to the other service boats. A well done to Air force for being the best of the services,” Sub Lieutenant Ekberg said.

The Inter-Service Keelboat Championship was scheduled to commence on March 8 and run for three days. Due to high wind gusts, racing was abandoned on Tuesday and Wednesday. Racing commenced on Thursday, the last scheduled day, with five races and seven Elliott7 boats in action. 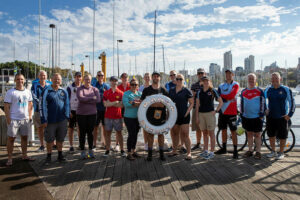 Air Force won the Inter-Service Keelboat Championship, having the lowest combined score of its two keelboats (14 points), then Navy (22) then Army (40).

Sergeant Ross MacDonald led the Air Force team in both the sailing disciplines said that he was very proud of the achievements of his team.

“A superb performance by the crew enabled skipper Sergeant Darrell Greig to steer the keelboat through many tight situations successfully,” Sergeant MacDonald said.

“Lieutenant Commander Shane Firkin’s Navy team kept pushing us hard, but it was their consistent teamwork that produced successive victories.

“This is my 21st inter-service championship and they are always excellent events for high-level competitive racing as well as developing new sailors.”

Lieutenant Jamie Curcio was part of the Army sailing team and enjoyed sailing in her first ADF sailing carnival.

“Coming from Darwin, it was great to be with the wider ADF sailing community to share experiences and improve my skills,” Lieutenant Curcio said.

“The racing was exciting and I was happy to be part of the Army sailing team. The sailing season in Darwin has just commenced, so I’m developing a sailing program to get more people from the Top End to attend the carnival in December.”

As part of the sailing carnival, an introduction to sailing session was held over two days. Participants enjoyed themselves and the challenge of the strong wind and rain.

Lance Corporal Stacey Lunt participated in the training session and said the sailing carnival was a great experience, and although she had sailed a bit in the past, the conditions were not what she was used to.

“There was lots of rain and it was very windy,” she said.

“It was good to undergo sail training in these conditions with experienced instructors, as it built my confidence.

“Sailing in the Elliot keelboats was also a great experience. The boat is a lot smaller and you are using muscles you never knew you had. It was great fun and I am looking forward to the next carnival.”