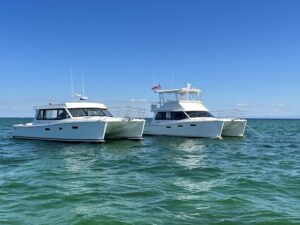 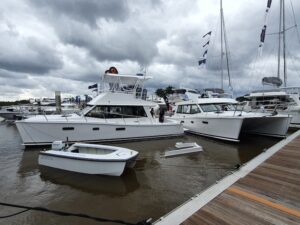 Making their official re-launch at the boat show, 19 to 22 May, the two Scimitar models, 1010 Sedan and 1010 Flybridge, were accompanied by a Scimitar tender, known as the “Minitar”.

The 3.75-metre twin-hulled tender, powered by a 15 hp engine, boasts a capacity for up to six persons plus equipment, rated for a total of 500 kilograms.

Tommy Ericson, CEO of the Aus Ships Group said the 2022 Sanctuary Cove International Boat Show was “exceptional” and despite the rain over the weekend, visitors were thrilled to be back to boat shows and very enthusiastic about the reimagined Scimitar cats.

“The atmosphere throughout the entire show was amazing,” he stated. “The industry is buzzing, consumers were excited to be back at a show stepping aboard boats, and although the weather was less than ideal, the volume of seriously interested parties was beyond expectation.”

Feedback on the new vessels was “nothing short of sensational”, he continued.

“Everyone was surprised at the internal accommodation and feeling of space, especially when they discovered the boat is only 10-metres (33-feet) in length.

“The finishes and the no-nonsense approach to achieving a modern, clean and aesthetically pleasing boat that was still focussed on being practical and user-friendly were really well received. With the added benefits of performance and the exceptional fuel economy, it just makes a lot of sense to a lot of people.

“The quote from a scimitar review many years ago still rings true; it’s ‘a thinking person’s boat’.”

“Existing owners say they love the changes we have implemented in the new models, including many subtleties that someone not familiar with the boats might miss.

“The two most commented on improvements were the engine access from the forward side and the openness achieved by the redesigned aft cabin bulkhead, which now incorporates a sliding door and window system which effectively blends the aft deck and saloon into a single space.

The original Scimitar 1010 was the product of collaboration among Bryan Bradford, Greg Byth and catamaran designer/builder, Peter Brady. The first boat was launched in 1997 and it immediately won Australian Power Boat of the Year.

By 2012 when manufacturing ceased, 65 units of the Scimitar 1010 had been built for Australia private and commercial clients, as well several built for export to the US and South Pacific.

“In addition to more than 20 interested parties from the show that we are now providing specific arrangements and options pricings to, we had at least 20 existing owners on board over the four days and many of those asked if we are planning to offer an ‘options list’ for them to upgrade their current boat with some of the improvements and additions we have made.”

Owner of hull #54 attended SCIBS and said he was pleased the brand has made a revival.

“The Scimitar was always ahead of its time and we have nothing but great respect for the boat, having done thousands of miles in our 1010 over the past few years.

“The new models are a great improvement and we are considering an upgrade to a new 1770 when they become available.” 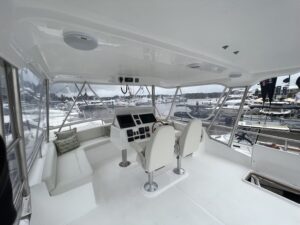 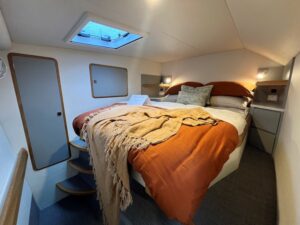 The compact tender, known as “Minitar” was also a hit, and Tommy took three orders at the show – two for existing Scimitar owners and one for a commercial angler who loves the concept.

“The tender is an asymmetrical catamaran designed from the ground up to serve as the ultimate all round tender,” explained Tommy.

“Stability and weight were the primary focal points for its development – achieving a platform that can comfortably carry at least four adults and all their gear safely to and from the beach, with sufficient uncluttered deck space to be a practical platform for fishing and crabbing all whilst being at a weight that makes it easily carried on davits or duckboards like that on Scimitar 1010s.

“The minitar will be fitted with a closed cell, foam fender all round, self-draining deck and economical powering options from 6 to 15 hp.”

Also on the drawing board is the Scimitar 1770, which attracted its own share of interest and enquiry.

“We received excellent feedback on the 1770, with many people excited that there will be an Australian-built option of that size available in the coming years.

“The detailed design is progressing well and production is set to commence this year, followed by the anticipated launch in the latter part of 2023.”

Proudly built in Brisbane at AusShips premises at Rivergate Marina & Shipyard, the Scimitar 1010, Sedan and Flybridge models have lead times of approximately 12 months.

“As demand increases, so will the production line to maintain the 12-month turnaround,” Tommy added.

“The first production models of the tender will be available in the fourth quarter of 2022. Lead time once in production will be in the order of four months.”

To arrange inspection or sea trial, email or enquire via the website www.scimitarboats.com.au