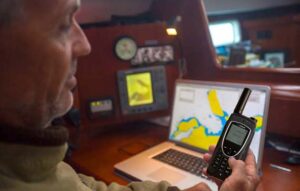 The Fremantle Sailing Club is the latest of several clubs to use satellite phones as a fundamental tool in their communications plan. Their 2021 Fremantle to Exmouth race was an excellent example of just how it can be done.

Basically, the FSC required all yachts to participate in the scheduled communications by sending a text message via satellite phone or even mobile phone.

Prior to starting, boats entering needed to demonstrate their satellite communication devices could both transmit and receive SMS and voice calls. Email was recommended.

During the race the text messages from yachts were simply “Yacht Name OK”. Race control will reply “Yacht Name logged, please copy”. The yacht would reply with another text “Copy”. The FSC would then copy the yacht’s position from the Yellow Brick tracking system and record it against the ‘sked’.

Behind the scenes the FSC used the MySMS text message management system to send and receive text messages. Anyone on the race committee could log in to the MySMS software on their computer and run the sked. The data from the sked would be recorded in a live Excel on Microsoft’s OneDrive also enabling anyone to access and view sked data.

The use of satellite phones to do skeds has reduced the time taken to run the sked across a fleet and is over in 4 to 5 minutes. The workload on board a boat has also been significantly reduced making navigators available for more time on the rail to hike.

The FSC has made the following documents available for other clubs to refer to:

The ORCV has also been using satellite phones for the Melbourne Osaka race for some time as well due to challenges specific to that race, and indeed were probably the first Australian club to adopt this technology for race communications. The ORCV allowed for a text message via the satellite phone system providing the race committee with status and position. The ORCV would respond by text message likewise. Since that time, the ORCV has been using satellite phone for all of their offshore races. After a sked the race committee sent a ‘plain text’ email of all boat’s positions to the entire fleet.

Both the FSC and ORCV both observed a significant reduction in human error at both ends. Accuracy has been increased. This makes the entire sked system better for everyone concerned.