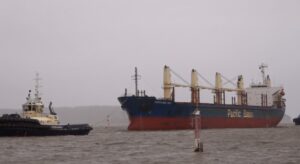 The MV Portland Bay has been detained due to the engine problems that led to it being stranded off the NSW coast since Sunday evening. AMSA has deemed that the vessel’s engine is unreliable and must be fixed and compliant before leaving port.

AMSA Executive Director, Operations, Michael Drake said “The vessel will be detained until AMSA inspectors are satisfied that the identified problems have been fixed.”

“We have sent two inspectors and one specialist lead investigator on board to assess the vessel’s mechanical and operational safety”.

AMSA specialists will also evaluate the vessel and crew’s compliance with international conventions and Australian law. The relevant legislation in this case is the Navigation Act 2012 and Protection of the Sea (Prevention of pollution from ships) Act 1983.

“While we can’t say at this stage how long the vessel will be detained, it is unlikely to be longer than the several days it takes to fix the engines and ensure all mechanical components are compliant and operational”.