How Maritimo’s Isaac Marshall has salt water in his veins

A key member of the Maritimo Pre-Delivery team, Isaac Marshall, has spent more time on and under the water than many in the marine sector more than twice his age.

Isaac plays an integral role in the commissioning and final handover of all Maritimo’s luxury motor yachts, based at Maritimo’s Hope Harbour Pre-Delivery Department, on Australia’s Gold Coast.

To say Isaac has saltwater running through his veins is an understatement. 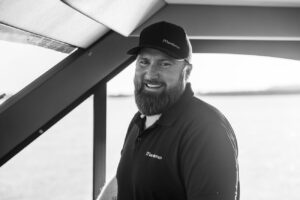 Growing up on the Gold Coast Isaac has always had a love of the ocean and it is that love which has seen him travel the world crewing and skippering sailing yachts, motor yachts and commercial craft in destinations such as Canada, United States, Alaska, New Zealand, Spain, The Caribbean and Mediterranean, United Kingdom, Asia, Micronesia, Polynesia, The Whitsunday’s, Sydney and Hobart.

He started his career in Sydney working as dockmaster for the Double Bay Marina. Isaac got his first commercial license while down in Sydney.

Starting as a deckhand he worked his way through the ranks from lead hand, to bosun, Second Officer, First Officer, and Captain. He raced offshore sailing yachts, ranging from 30 to 60 feet, out of Sydney in regattas, Sydney Hobart Yacht Races and up the east coast of Australia.

From Sydney, Isaac went to Canada where he raced yachts, skippered commercial vessels following orcas on the west coast and cruised Alaska onboard various kinds of yachts.

He has been on numerous expedition trips through the entire southern hemisphere with a focus on ocean conservation. He has been involved in documentaries about coral, whales and sharks and worked with biologists as a technical diver.

In his role at Maritimo Isaac is often the skipper who takes national and international media out on new Maritimo models for boat reviews. 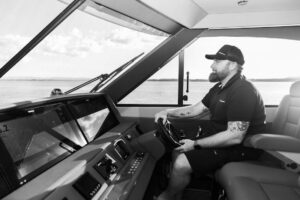 The affable Isaac’s long list of achievements over the past 16 years is greatly varied and belies his age.

Circumnavigating New Zealand, skippering yachts in the Med and the Caribbean, running a commercial sailing cat on Hamilton Island, sailing in large superyacht regattas, on vessels over 150 feet in length, such as ST Barth’s Bucket in the Caribbean and the Candy Store Cup in the USA and numerous dive expeditions Isaac has a depth of experience that is unsurpassed.

A self-confessed junkie for courses and qualification upgrades Isaac did most of his study in England and Scotland, but also New Zealand, America, Spain and Australia.

Isaac has also spent a great deal of time under the water He has a commercial dive ticket, a Padi – Divemaster qualification, is a qualified Hyperbaric chamber operator and nurse, has advanced medical training, advanced fire fighting training and is a qualified technical diver -rebreather diver multiple units.

“My love of the ocean has only ever grown stronger and my passion for boats of all shapes and sizes has continued to grow throughout my career so far,” he said.

“I love that I now get to inject all my passion into Maritimo and be part of a growing family of skilled and passionate boaties.

“It is a great thrill to see vessels come from the production line to our marina, then get commissioned and finally handed over to excited new owners who have been counting the days until they take delivery of their new pride and joy. 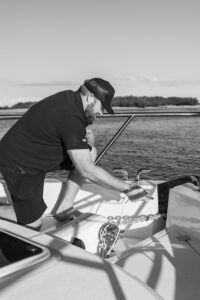 “It really is a special experience and one I never tire of. “We are all part of a dedicated team that continually strives to be better and to provide the ultimate customer experience and it is tremendous to be part of that.”

Maritimo’s managing director Tom Barry-Cotter said the company placed a great deal of importance on meeting and exceeding customer expectations and Isaac was a very important element in that process.

“He has a great eye for detail, is incredibly skilled with broad international experience and works really well with the team.”

Maritimo is one of the Gold Coast’s largest employers with more than 200 staff. The company has forward orders for its motor yachts stretching into 2025.

“It is passionate and skilled employees like Isaac that help make Maritimo what it is today” he said.