Seakeeper launched its newest product, Seakeeper Ride, marking the company’s first product deviation from its line of gyrostabilisers. Seakeeper report that the product benefits include: 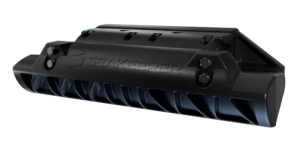 “Seakeeper has always been committed to bringing disruptive technology that represents a wholesale change from what’s currently available,” said Seakeeper President and CEO Andrew Semprevivo. “Seakeeper Ride isn’t an incremental improvement; it transforms what it feels like to be on a running boat. We’re drastically changing the boating experience… again.”

Seakeeper Ride controllers are mounted to the boat’s transom below the waterline. Using proprietary inertial sensing hardware and software, the system understands how the boat is behaving in all three axes and commands deployment of the Seakeeper-designed rotary blades, making 100 adjustments per second at speeds of up to 300 mm/s, creating lift that manages the vessel’s motion instantaneously. Chris-Craft Boats, Scout Boats and Sportsman Boats are joining Seakeeper Ride as exclusive launch partners, making the product standard equipment across a wide range of models.

“The Seakeeper Ride system is the next big thing in boating,” said Chris-Craft Boats Vice President of Engineering Ron Berman. “In my years in the industry, I have never experienced a system that improved the ride, handling, and predictability of operating a boat in the way Seakeeper Ride does. All of us at Chris-Craft are looking forward to offering our customers a superior boating experience.”

“We are proud to be a part of the launch of Seakeeper Ride,” said Sportsman Boats President Tommy Hancock. “My team’s first demo really blew us away. I have been in the marine industry since 1984 and can honestly say that Seakeeper Ride is the one of the best innovations I’ve ever seen, giving boaters a far superior experience on the water. This is going to be an industry standard.”

Initially, Seakeeper Ride will be available as standard equipment only on select models from Sportsman Boats, Chris-Craft Boats, and Scout Boats as early as September 2022, with plans to increase OEM offerings in the coming year, as well as retail sales for DIY installation.

“Seakeeper has been a wonderful partner for many years,” said Scout Boats President Dave Wallace. “When I was made aware of the new Seakeeper Ride system and then given the opportunity to test it, I soon realized that this would be a game changer in our industry. Seakeeper has brought to boating what the automatic transmission brought to automobiles.”

Seakeeper Ride is the first-of-its-kind Vessel Attitude Control System (VACS), eliminating up to 70% of pitch and roll underway to dramatically improve the performance of vessels up to 35 ft. A segment of Seakeeper, Inc., the global leader in marine motion control, Seakeeper Ride was launched in 2022 and is based in Fort Myers, Florida. For more information, visit ride.seakeeper.com.