Sydney sailor Felicity Nelson sailed across the Rolex Sydney Hobart Yacht Race finish line at 07:34:34am this morning but there was no major celebration in recognition of her milestone 25th Sydney Hobart, as she doesn’t like the fuss. 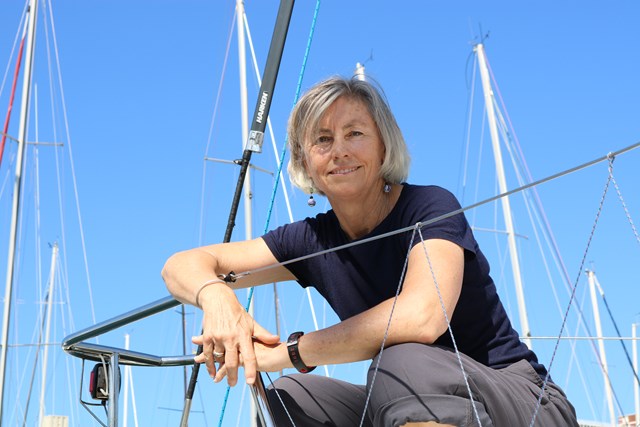 Nelson has become only the second woman to reach this milestone, behind Adrienne Cahalan, who ticked off her 30th Hobart aboard Oroton Drumfire this year.

“All the races are special,” she says of the Cruising Yacht Club of Australia’s (CYCA) annual race.

“This race is particularly special. It’s my 25th and I am doing it on my own boat, which brings more responsibility. The joy was in finishing and finishing with this crew was the icing on

the cake,” said Nelson, who tends to fly under the radar, not one who is comfortable with attention focussed on her.

Nelson bought Supernova, a Sydney 36, with Alex Seja, who she has also shared her life with for the past 15 years. They are a team. They have sailed a lot of miles together, inclusive of many Sydney Hobarts and trips to Lord Howe Island. Seja attained his 18th Hobart this year.

She concedes it is a tricky affair buying a yacht with another person: “You have to pick the right one and we know each other well. We are enjoying owning our own yacht.”

It was not a straightforward race for the pair and their crew, as Nelson explained: “We ran out of drinking water and we had no instruments for two days. We still got here. You go back to basics. Steering by compass and by the feel of the wind.

“We couldn’t charge our laptop, so didn’t have much in the way of outside information. It was only when arrived this morning we were getting an idea of retirements and how the race was for others.”

The yachtswoman acknowledges the many retirements and said, “It’s a big deal getting ready for the race because of the Covid situation and the cancellation of last year’s race.

“We were only able to sail the Cabbage Tree Island Race to prepare. Our crew is amazing. Lauren Connors, our navigator sailed her first and second races with us. We also had two first-timers on board. We found them on a crew finders register. They were not experienced, but they were quick learners,” Nelson said.

Given the terrible forecast and subsequent southerly blow on uncomfortable seas in the first 24 hours of the race, Nelson said they did not sail the boat conservatively as others had done.

“We just sailed as we usually do. And we are here,” said Nelson, whose name will now be added to the famous ‘Map of Tasmania’ board that has pride of place at the CYCA.

Some of the remembrances she will take away from her 25th Sydney Hobart, Nelson said, “Was seeing two displays of dolphins – there were dolphins all the way. We saw two seals that came to greet us at Tassie Island and lots of Albatrosses and Mutton Birds. It’s been years since I’ve seen so many Albatrosses.” A good omen.

Select Maritimo Models to be powered by MTU from 2022